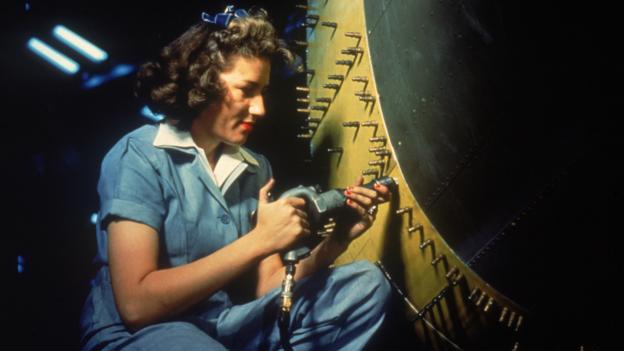 In January 1941, Winston Churchill gave a sombre address to the House of Commons, the UK’s parliament. “Our Empire and indeed the whole English-speaking world are passing through a dark and deadly valley,” he remarked in one of World War Two’s bleakest periods. “But I should be failing in my duty if, on the other wise, I were not to convey the true impression, that a great nation is getting into its war stride.”

Comparisons between World War Two and the current coronavirus pandemic are prolific. New York Governor Andrew Cuomo, who has been compared to a wartime president, has peppered his daily briefings with combative language, describing the apex of the disease’s curve as “the next battle at the top of the mountain”, and proclaiming “ventilators are to this war what bombs were to World War Two”.

European leaders, meanwhile, talk of an inevitable “D-Day” when the outbreak will overwhelm the hospital system, and allude to war with an invisible enemy. Healthcare workers are on the frontlines, scientists are the new generals, economists draw up battle plans, politicians call for mobilisation. Just a few weeks ago, Queen Elizabeth II urged Britons to adopt the same discipline and resolve that the people had showed during WWII. “It reminds me of the very first broadcast I made in 1940, helped by my sister,” the monarch recalled during a rare televised address.

The coronavirus pandemic, though different from the war in many crucial respects, seems to demand some of the same measures used during that global emergency. From boosted production to rapid redeployment of resources, increased governmental oversight and stimulus plans to potential rationing, 2020’s battle against a virus might force great nations to once again adopt their war strides.

Are there lessons we can learn from the collective anxiety, the contingency measures, the calls for national cohesion and the dramatic changes to society that defined WWII? Is there is a fallacy in the modern conception of the immediate “united front” – a fallacy that will continue to play out against the backdrop of the pandemic? What does shared sacrifice look like, and how will it shape our future this time around?

Are we witnessing the death of the car?

Azerbaijan’s secret to long life? Mountain air in the village of Lerik

Angela Merkel/German Presidency. After a bilateral meeting with EP President David Sassoli, German Chancellor Angela Merkel will address Parliament in a debate on...

The 5 Habits Holding Back Your Success

There are some people who are able to achieve incredible success and live extraordinary lives. They have the same number of hours in...

Chart Of The Day: NASDAQ Braces For Correction After Record High

As the hovers near record highs, coronavirus cases in the US have topped 3 million. Dr Anthony Fauci, the country's top authority...

European Investment Bank provides funding of €20 million to NavVis as part of the...

Questions and Answers on the EU budget for recovery: Recovery and...

Chart Of The Day: Euro Heading Toward USD Domination? Not Quite...

The 5 Habits Holding Back Your Success

Chart Of The Day: NASDAQ Braces For Correction After Record High