Since touching the March 23 low, the rebound of Apple’s (NASDAQ:) stock has been remarkable. Shares have risen more than 50% since then and are up about 10% for the year. Currently trading at $318.89, the stock is poised to surpass its all-time high closing price of $327.20, reached on February 12, 2020, just before the pandemic hit the global economy. 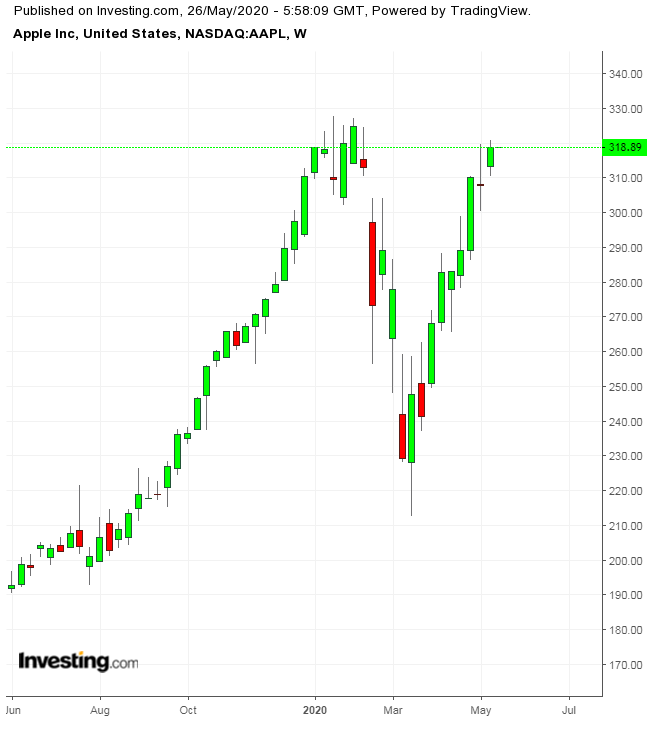 As this broad market rally steams ahead, the big question going forward is whether this bullish trend is sustainable and is the time right to bet long on Apple’s stock? Possibly not.

The risks to the maker of iPhones, personal computers, tablets and wearables are growing. Perhaps the company’s biggest challenge right now is the re-emergence of the U.S.-China trade dispute. The latest blow to the already strained ties between the world’s two largest economies came when President Donald Trump this month extended his effort to curb Huawei Technologies’s access to the U.S. market and American suppliers.

Trump renewed a national emergency order for one year, which restricts Huawei and a second Chinese telecommunications company, ZTE Corp (HK:), from selling their equipment in the U.S.

The U.S. Department of Commerce later expanded its so-called entities list, which restricts access to American technology and other items, to include 24 Chinese companies and universities. The U.S.-China relationship has worsened dramatically in the past few months as Trump blamed China for mishandling the coronavirus pandemic that has so far killed about 100,000 people in the U.S. and shuttered its economy.

Hu Xijin, the influential editor of the Global Times, which has close ties to the Chinese government, has warned in a tweet that China may declare Apple, Qualcomm (NASDAQ:) and Cisco (NASDAQ:), as unreliable entities and stop buying planes from Boeing (NYSE:).

China’s Foreign Minister Wang Yi on Sunday said the U.S. was pushing relations to a “new Cold War,” as American politicians condemned Beijing after its latest move to impose a national security law on Hong Kong.

Because Apple has constructed a large network of suppliers in China, over the last few years, in order to reduce costs, it has become one of the most exposed stocks to the Asian country. The Cupertino, California-based tech giant employs an estimated two million people within the Apple supply-chain, in addition to a similar number of tech workers busy on the development of Apple apps. The company designs and sells most of its products in the U.S., but imports them from China after assembly.

Beyond the China risk, some analysts also have doubts whether the technology giant will quickly recover from the slump that came as a result of the pandemic.

Goldman Sachs, in a recent note, has downgraded Apple to sell from neutral, citing slowing iPhone demand as users hang on to phones longer, as well as stagnating services growth. The firm also sees a lingering effect on prices, wherein Apple is unable to charge more for smartphones.

Analyst Rod Hall said he was concerned about a delay in the launching of a 5G iPhone, which has been touted as one of the main growth drivers going forward. “Limited global travel at this crucial point in Apple’s 2020 iPhone final engineering and production process could result in a delayed launch this year,” he said.

While announcing its last month, Apple didn’t provide a forecast for the first time in more than a decade due to the ongoing complications from COVID-19.

The coming few days will be crucial for the sustainability of the rally in Apple stock as investors start taking into account their expectations for the seriousness of the China risk. Shares had underperformed at the height of the trade war last year and that might be the case again if the tension between the two economic powers escalates.

How This Beauty Founder Went From Welfare To CEO

Rent Strike Planned for May 1 as Pain of Coronavirus Deepens