Natural gas’ hide-and-seek game with $2 summer pricing will likely continue for a while as LNG exports remain its Achilles heel.

As the 50 U.S. states progress with their reopening from COVID-19 lockdowns, markets are reacting differently: on Wall Street are on a tear; are up 200% from April lows; and is holding to its an ounce perch.

But has spent almost the entire month just trying to stick to the $2 per million metric British thermal units sweet spot it briefly occupied in early May. 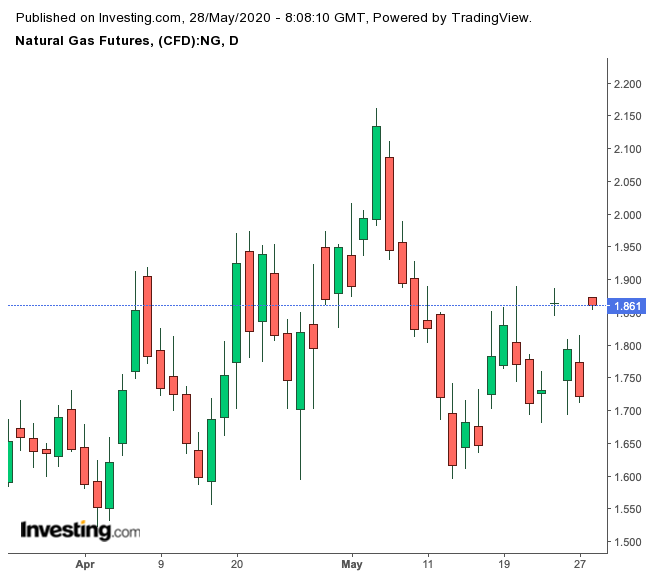 And the reason for that is the stacking up of , numbering more than 30 cargoes for June delivery itself.  And weak international prices for Liquefied Natural Gas are signaling that oversupply conditions will linger for a while, say those in the know.

In Wednesday’s session, Henry Hub’s spot contract, June, expired and went off the New York Mercantile Exchange board at $1.72 mmBtu. The first summer-month futures contract, July, settled at $1.89, while the successive month, August, came in at $1.97. For now, the $2 handle was only in the domain of the September contract, which effectively becomes the front-month in August.

While “a battle with offsetting export reductions continues, several more triple-digit builds are on tap going into June,” Dan Myers, an analyst at Houston-based gas risk consultancy Gelber & Associates, said in a cautionary email to the firm’s clients on Wednesday that was seen by Investing.com.

“So, while this year’s largest spring builds may not challenge last year, coming injections should stay comfortably above the five-year average pace.”

One of those triple-digit builds is expected to show up in the U.S. Energy Information Administration’s weekly data release at 10:30 AM ET (14:30 GMT). The EIA is likely to report an into storage for the week ended May 22, according to a consensus of analysts tracked by Investing.com. It would come after the 81 bcf build reported by the EIA for the week to May 15, after two previous back-to-back storage increases of 103 and 109 bcf.

If the projections for the just-ended week are correct, the latest injection would be higher than the five-year (2015-2019) average build of 93 bcf for the period.

It would also boost the U.S. national gas stockpile to 2.610 trillion cubic feet, leaving it some 19% higher than the five-year average and about 42% above the same week a year ago.

“The market is seeing better data though we will need to see it in the weekly inventories as well,” energy futures broker Scott Shelton wrote to clients of ICAP in Durham, North Carolina.

As Shelton notes, not all the data in natural gas now is bearish. Power burns, for instance, were up by 31 bcf last week as larger sections of the U.S. economy began reopening from coronavirus lockdowns, he said.

“I remain a bull on natgas utilization and somewhat on flat price, though the ‘noise’ is just numbing,” Shelton wrote to ICAP’s clients, referring to the storage builds and LNG cargo cancellations.

LNG Imports Into The U.S. To Worsen The Situation?

Natgasintel.com reported, citing data from BTU Analytics, that in addition to the likelihood of U.S. cargo cancellations continuing over the next months, low international prices for LNG versus U.S. rates could result in a potential flood in imports of the fuel in the near term.

While LNG imports into the United States are not uncommon, a demand surge in the summer months “would be unexpected to say the least,” BTU analyst Connor McLean said.

The United States currently imports an average of 0.2 bcf per day throughout the year, according to BTU, but those imports are heavily weighted to the winter months when the Northeast requires imports to meet peak winter heating demand.

“These cargoes that have traditionally gone to Europe and Asia could instead make the shorter journey to the U.S., taking advantage of both higher gas pricing as well as lower shipping costs to increase netbacks,” McLean said.

“Alternatively, cargoes could also find their way to Mexico, backing out pipeline imports from the U.S. in the process.”

While spreads between international prices and Henry Hub may not move high enough to incentivize major international shippers such as Australia or Qatar to send cargoes to the Lower 48, they could convince shippers that are closer to take advantage of premium U.S. pricing, according to the firm.

In particular, the island nation of Trinidad and Tobago (T&T) appears well positioned to potentially take advantage of higher U.S. prices. Over the past two years, T&T has consistently exported 1.6 bcf/d to countries around the world, BTU noted. The bulk of the exports, about 48% in 2019, go to Europe and Asia, while North America accounts for about 13% on average.

“The summer months are typically much more barren, with three months last summer seeing no LNG imports at all,” McLean said.

“In a potential scenario where only half of the previously identified Caribbean exports make their way to the United States, LNG imports would see levels generally seen during the peaks of winter.”

The EIA projects that U.S. gas demand will drop in 2020 and 2021 from the record highs last year as state authorities remain vigilant about the need to curb social and economic activity if necessary to stem a second wave of COVID-19 infections.

US Dollar on the Rise with FX Volatility; Sentiment Souring?

3 Stocks That Should Benefit As The U.S. Economy Reopens

PPP Loans Should Not Be Automatically Forgiven

8 Signs You Have Validated Your Startup App Idea

Crude Oil May Rise on Renewed US-Iran Tensions Ahead of 2020...