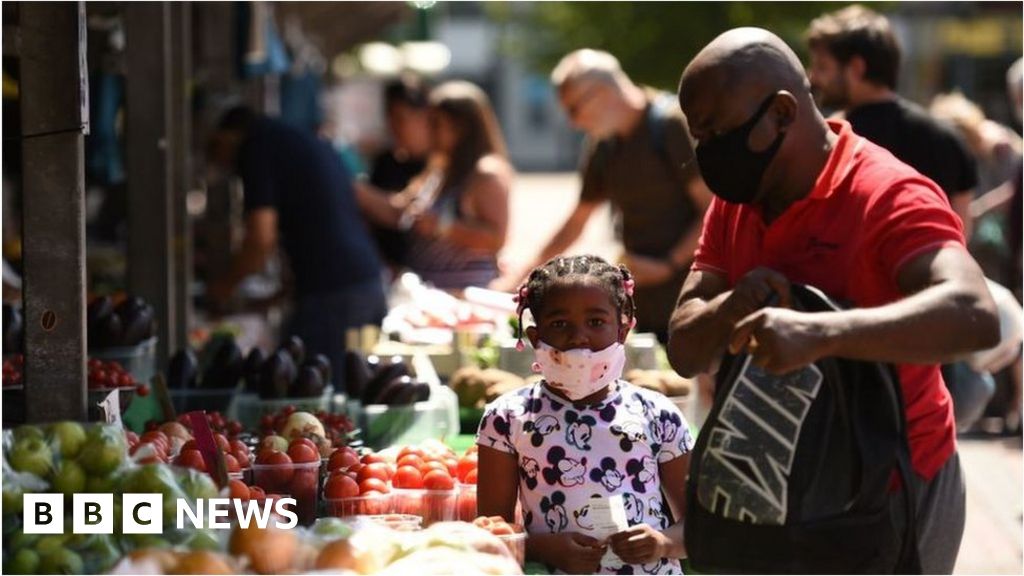 Lockdown is starting to ease.

Across the UK we can meet more people, while in England some children are back in school and car showrooms and open-air markets have reopened.

But some scientists, even those advising government, have been in mutinous mood – saying ministers are acting too soon.

And the lifting of restrictions has been described as a “dangerous moment” even by England’s deputy chief medical officer.

So how perilous a position are we in?

Things are far better than when lockdown came in.

There were an estimated 100,000 new infections every day in England on 23 March, the day when Boris Johnson announced strict curbs on our daily lives.

That compares with around 8,000 daily infections at the moment.

“It’s somewhere in the range of 10-fold fewer, but that’s still considerable,” Dr Adam Kurcharski from the London School of Hygiene and Tropical Medicine told the BBC.

The speed at which the virus is spreading is also much slower.

The R number – the average number of people each infected person passes the virus onto – was around three when lockdown came in.

That meant 10 people were passing coronavirus onto 30 others.

Now the R is around 0.7-0.9, meaning 10 people would be expected to pass it onto around eight others.

However, a comparison by the University of Oxford suggests the UK is in one of the worst positions globally for exiting lockdown.

And it is notable the government’s own coronavirus alert system for England remains at “Level 4” rather than “Level 3” when social distancing restrictions would be relaxed.

The chief science advisor, Sir Patrick Vallance, warns there is “not a lot of room” for manoeuvre and the data “urges caution”.

R is close to one – the tipping point where cases increase again and “we are still seeing new infections every day at quite a significant rate”.

Relaxing lockdown means we will come into contact with more people and that increases the opportunity for the virus to spread.

The restrictions being eased are expected to have a small role in spreading coronavirus, but their precise impact is unknown.

Uncertainty is a particular issue with schools. The government’s evidence on reopening them could not put a figure on the impact.

There is also uncertainty about how we will react to the loosening of the rules. Behavioural scientists advising the government already estimate only half of people are isolating for seven days when they become sick.

Why are scientists concerned?

Throughout the pandemic, the scientists and politicians have been following the same script.

But there is now a clear, loud and public split between some of those advising government and those “following the science”.

More than a dozen Sage committee members, who advise government, have spoken out, saying we should wait until test and trace is fully working and cases have come down.

“Essentially, we’re lifting the lid on a boiling pan and it’s just going to bubble over,” argued Prof Calum Semple.

There is a significant consequence to lifting lockdown now – it may lock us into the current number of cases.

Waiting until cases fall further would make the virus easier to control and give more time to react if there was a “second wave”. However, that requires keeping a painful lockdown for longer.

There is also uncertainty about how effective contact tracing will be in the UK.

The aim is to replace lockdown for all with isolation for some, by rapidly identifying and quarantining anyone who comes into close contact with someone infected.

The strategy is seen as one of the key reasons some Asian countries have excelled at controlling coronavirus (South Korea has around 270 deaths compared with more than 39,000 in the UK).

However, there is a danger in expecting identical results.

The UK is not using GPS tracking to ensure people do as they are told, like South Korea, or taking people to quarantine centres as they do in Hong Kong.

Speed is crucial in order to find contacts before they become infectious, yet there are concerns about how long home testing takes in the UK.

And an analysis of South Korea’s strategy, by Imperial College London, suggests mass testing when a cluster of cases appears in one area was more influential than tracing contacts.

Estimates of the effectiveness of test and trace vary widely, from a 5% to a 30% reduction in infections, depending on how optimistic the number crunching.

Will we get a second wave?

The number of people that have been infected remains low, so any immunity is also low.

That means there is the potential for a second wave, but whether it happens depends on both government decisions and how we react.

The plan is to gradually introduce measures and then monitor what happens.

“With a cautious, piecemeal approach, I think the risk of a major increase is not particularly high; let’s not call it a second wave, let’s call it a second bump,” said Prof Mark Woolhouse from the University of Edinburgh.

A sudden surge in cases is considered unlikely.

Dr Kucharski said: “I don’t think we’ll see a huge, exponential increase in numbers in a couple of weeks.

“It may take some time for that to happen if transmission is in clusters; it will be late summer or autumn or even winter, depending on what happens. It may be we’re in for a long haul.”