“A crash is virtually inevitable,” according to Stephen Roach, a Yale University Senior Fellow.

An exceptionally low domestic savings rate and a chronic shortfall are expected to get worse, as the US blows out the in the years ahead. The national savings rate, adjusted for depreciation, is probably going to fall more deeply into negative territory than at any time in the history of the US, or any leading economy.

At the same time, America is walking away from globalization, as it embraces isolationism. That’s a lethal combination, as it may prompt other countries to reduce their dollar holdings.

Such a scenario could signal a shift in US world dominance, although that eventuality could take a while.

For now, the dollar has been hit with a double-punch: expanded monetary, as well as fiscal policy. This reduces the relative value of each dollar in the short term, while exacerbating the currency’s already precarious situation in the long term. 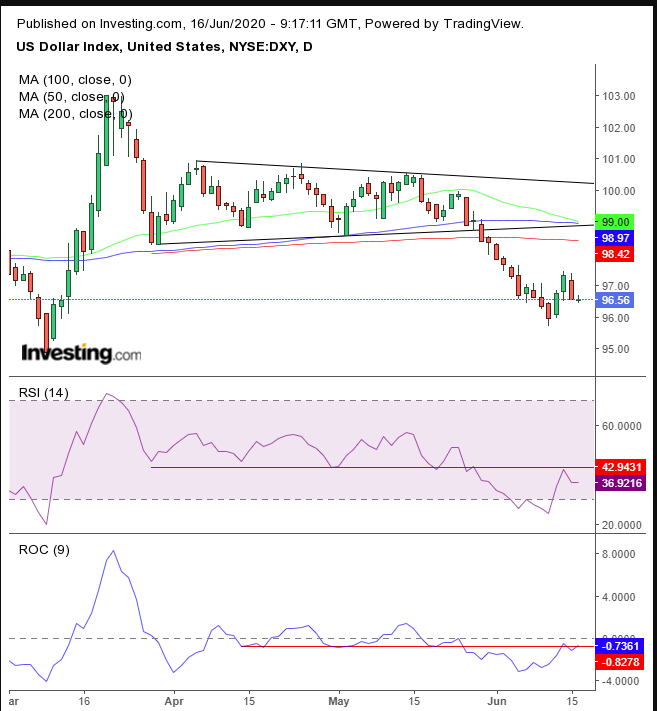 The dollar just snapped a two-day advance yesterday, which appears to have been a small corrective rally within the broader selloff that followed the tipping of the scales. This ended a stand-off, handing bears a decisive win. Indeed, the implied target of the preceding range calls for a re-test of the March 9 low.

Both the RSI and the ROC—each a momentum-based indicator—provided resistance. Momentum is signaling the price has exhausted its return-move. Both momentum indicators had already returned to the levels when the price was trading within a symmetrical triangle, up to May 27.

The 50-DMA fell back towards the 100-DMA, potentially on course to cross below the 200-DMA, thereby triggering a death cross. The fact that all three major MAs aligned with the bottom of the range highlights the importance of this area as the cut-off point between supply and demand.

Note: This is a trade sample, which—by definition—means it cannot account for all scenarios and is but a single trade within an overall trading strategy that a trader takes. If you place all your eggs in one basket, you’re likely to crack your eggs. Feel free to tailor the trade to your needs.

Draft joint ESMA and EBA Guidelines on the assessment of the suitability of members...