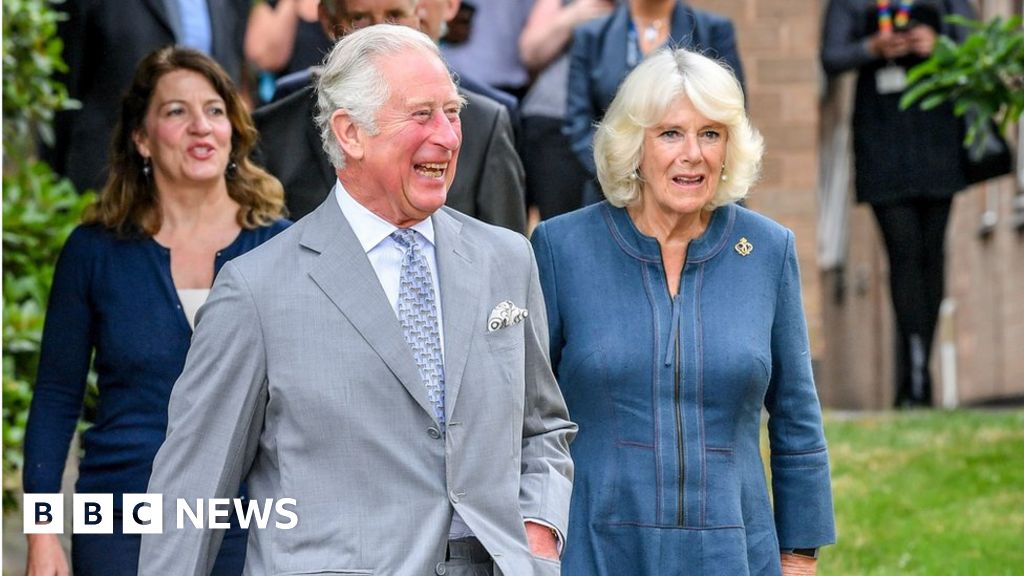 Prince Charles has still not fully regained his sense of smell and taste after having coronavirus in March, he revealed on a visit to NHS staff.

The prince discussed his personal experience with the virus as he met workers at the Gloucestershire Royal Hospital – at a 2m distance.

He was accompanied by his wife, the Duchess of Cornwall, who said the staff had showed “Britain at its best”.

It was the couple’s first face-to-face public engagement since lockdown began.

They met frontline staff and key workers from several NHS trusts, including consultants, nurses and cleaners, at the hospital near Prince Charles’s Highgrove estate.

Social distancing rules were observed, with those waiting to meet them standing on yellow dots to ensure they were 2m apart.

Prince Charles greeted some of those he met with a “namaste” – clasping his hands together – instead of a handshake.

Jeff Mills, 47, a healthcare assistant from Cheltenham General Hospital, said: “He did speak of his personal experience, so first-hand experience for him.

“He also spoke about his loss of smell and taste and, sort of, still felt he’s still got it now.”

The 71-year-old prince was diagnosed with Covid-19 near the start of the outbreak, after suffering mild symptoms. A loss of smell is thought to be one of the key symptoms.

He later said he had “got away with it quite lightly”.

Asked if the country’s appreciation of the NHS had changed for good, the duchess said: “I think it has, you can tell by all the people coming out every week to clap – they’ve done the most remarkable things.

“The way they’ve looked after people, the way they’ve sort of kept control of the whole thing… it’s a question of not panicking and getting on with it and I think they are Britain at its best.”

She also revealed the couple had their first socially-distanced reunion with their grandchildren last weekend, saying it had been a “great treat”, even though they were not able to hug them.

With lockdown restrictions being eased, the Royal Family have chosen to take a step towards a return to normality – with a series of face-to-face public engagements.

The Duke of Cambridge visited Kings Lynn Ambulance Station in Norfolk – the first time he had met members of the public in person since coronavirus restrictions were imposed.

He joked about how he was looking forward to having a pint in the pub, as he praised staff for “all your hard work”.

Prince William said: “Everyone appreciates the NHS, we have an amazing system, it’s a great health service and many countries around the world envy what we have.

“It’s not until you have a big crisis, a pandemic, and everyone realises we have to really make sure we value and we show our appreciation.”

He also joked: “I’m worried about the waistline of the nation as well, with all the chocolate and cakes. I’ve done a lot of baking at home.”

The prince recently revealed he had been volunteering for crisis helpline Shout 85258 during the lockdown.

Can These Nordic Startups Solve The Lack Of Diversity In Tech?

Media advisory – Video conference of ministers of culture, 19 May...

The Mortgage Industry Is Facing a Crisis Because of the Coronavirus—and...