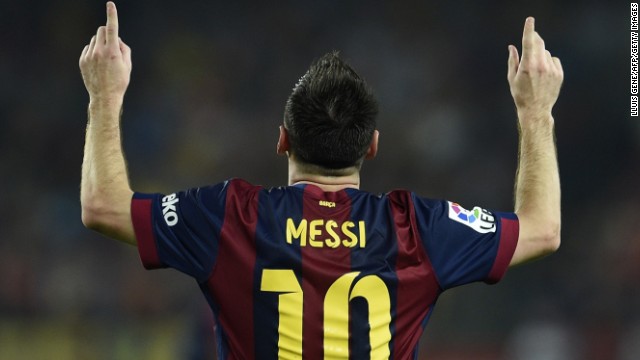 As a young boy, Messi was diagnosed with a growth hormone deficiency. At age 13, he signed with Futbol Club Barcelona and moved to Spain. As part of the contract, FC Barcelona agreed to pay for Messi’s hormone treatments.

November 16, 2003 – Makes his team debut, as a replacement in a friendly match against FC Porto.
October 16, 2004 – Makes his official debut for FC Barcelona against Espanyol. Barca wins 1-0.
2007 – Establishes the Leo Messi Foundation, working to improve access to education and health care for children.
August 2008 – Leads Argentina’s soccer team to a gold medal at the Summer Olympics in Beijing.

March 11, 2010 – Messi is announced as a UNICEF Goodwill Ambassador.

2011-2012 season – Sets the all-time record for most goals scored in a single season for a major European football league, with 73 goals.

June 2013 – Prosecutors in Barcelona file tax fraud charges against Messi and his father for the period between 2007 and 2009. The complaint alleges that Messi and his father, aiming to lower their Spanish tax bill, sought to manage the player’s lucrative income from image rights through shell companies set up overseas. Messi denies all allegations of wrongdoing.

June 25, 2013 – Prosecutors in Barcelona tell CNN that Messi paid €10 million ($13 million) in taxes to cover the tax period 2010-2011, but efforts to prosecute him for alleged tax fraud from 2007 to 2009 are still ongoing.
August 14, 2013 – Messi and his father, Jorge Messi, make a “reparatory” payment of €5 million ($6.6 million) to Spanish authorities for allegedly committing tax fraud between 2007 and 2009.
September 27, 2013 – Messi and his father testify in a Barcelona court in a preliminary hearing over allegations they defrauded Spanish tax authorities of more than $5 million.
March 16, 2014 – Scores a hat-trick (three goals during a game), to become FC Barcelona’s all-time leading scorer with 371 goals, eclipsing the record set by Paulino Alcantara, who scored 369 goals.

June 2014 – A Spanish state prosecutor asks the judge to drop the tax fraud charges against Messi, but not his father.

July 13, 2014 – Messi wins the Golden Ball award for the best player of the World Cup tournament.

July 28, 2014 – A judge rules that the tax fraud case against Messi and his father will proceed, despite the Spanish state prosecutor’s June request that the charges against Messi be dropped.

October 8, 2015 – A Spanish court rules that Messi and his father will stand trial for tax fraud charges.

May 31, 2016 – The tax fraud trial begins for Messi and his father.
June 27, 2016 – Says he probably will retire from international soccer after Argentina loses the Copa America final to Chile on penalties.
July 6, 2016 – A Barcelona court fines Messi €2 million ($2.3 million) and also sentences him to 21 months in prison for tax fraud. The Spanish courts officially reduce Messi’s prison sentence to an additional €252,000 ($287,000) fine in July 2017.
August 12, 2016 – Messi announces that he will play for Argentina once again, having stated in June that he would retire from international soccer.
July 5, 2017 – Barcelona and Messi announce a contract extension that will keep Messi at Barca until June 30, 2021 and is reportedly worth €565,000 ($645,000) a week.
January 13, 2019 – Scores his 400th Spanish league goal in his 435th appearance, extending his record as La Liga’s all-time top scorer. Messi is the first player to score 400 times in any of Europe’s “big five” leagues.
August 2, 2019 – Messi is banned from all competition for three months and fined $50,000 by the CONMEBOL Disciplinary Court. The punishment comes after Messi’ accused South American football’s governing body of corruption, suggesting the 2019 Copa America was rigged in favor of hosts Brazil.
May 2020 – Is ranked No. 3 on Forbes’ annual list of the world’s highest paid athletes, with estimated earnings of $104 million.

The COVID-19 Recession and Small Business

How To Skyrocket Your Webinar Attendance

Amazon Vs. Microsoft: Which Is A Better Buy Now?

The world’s largest technology companies have carved out a unique role during the COVID-19 pandemic. They are now considered defensive plays thanks to...

By Vikas Agrawal, co-founder at Infobrandz, an elite team of visual communication experts taking content marketing to the next level. ...

3 Defensive Stocks To Bet On As Second Wave Risk Hits...

Amazon Vs. Microsoft: Which Is A Better Buy Now?