US futures for the , , and , along with global equities, all advanced on Tuesday, as the promise of additional stimulus from both the US central bank and a potential new initiative from the Trump administration outweighed concerns over a second wave of the coronavirus pandemic.

Investors find themselves between a rock and a hard place: continued stimulus helping buoy what’s looking increasingly like an alternative, ‘sugar’ fueled economy, versus real-world concerns of a second wave of the worst global pandemic in more than a century.

As if not to be outdone yesterday by the Fed’s additional liquid injection with its expanded corporate bond buying plan, Bloomberg that “the Trump administration is preparing a nearly $1 trillion infrastructure proposal,” aimed at resuscitating the world’s largest economy.

After the promise of all this support, contracts on US indices opened higher. The advance continued to push higher as trading progressed, with each contract now showing gains of more than 1%, with Russell 2000 futures closing in on 2% at time of writing. 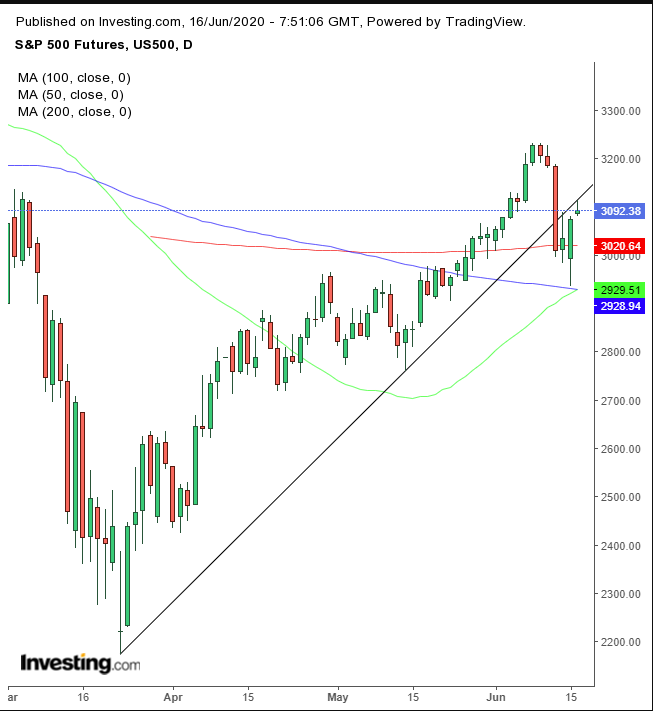 Contracts on the SPX, while remaining above the 200-DMA for a third day, retreated from their broken uptrend line, possibly developing a shooting star.

Gains in travel shares and construction firms boosted the to a higher open earlier today.

Asian indices all closed higher on Tuesday. South Korea’s surged 5.3%, the sharpest advance for the index since March 25, boosted by foreign investors. Japan’s jumped 4.9%, after the Bank of Japan announced its corporate-lending support program. Australia’s added 3.9%. China’s lagged, climbing ‘only’ 1.4%, a rare occurrence of late.

During the Wall Street session on Monday, Fed support pushed the 0.8% higher. Earlier, the benchmark index reversed from a 2.5% loss over rising concerns of a second wave of COVID-19.

With risk-appetite restored, investors rotated out of the safety of Treasuries into equities. 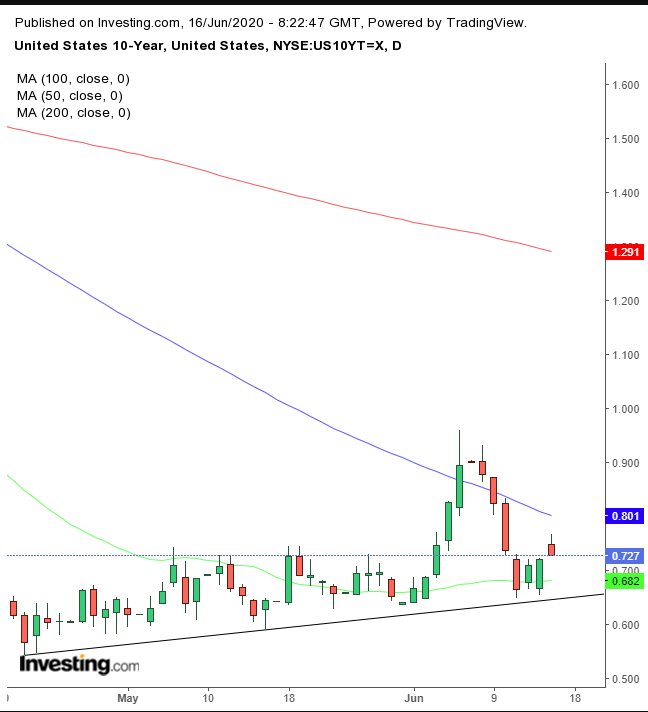 Yields, including for the note, jumped, extending a rebound off an uptrend line since April 21. The pattern is sandwiched between the 50 and 100 DMAs.

The dollar found its footing after dropping yesterday and ending a two-day advance. 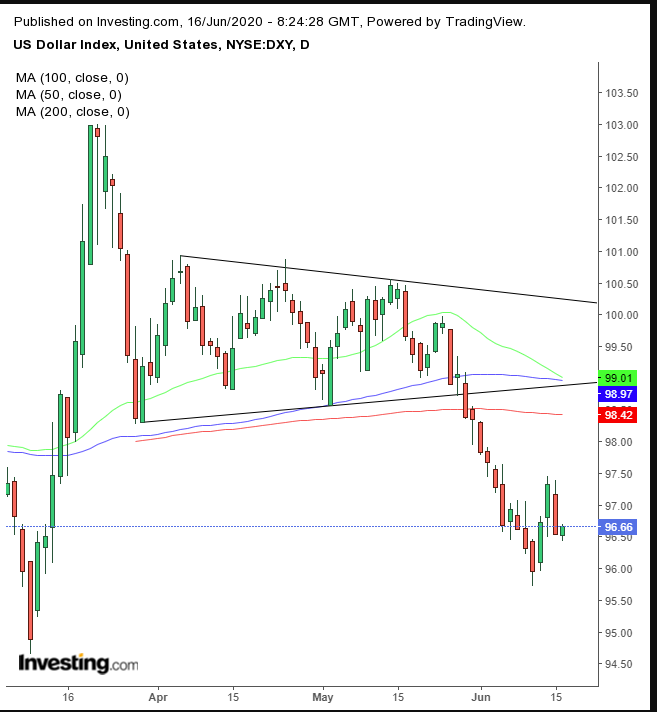 Monday’s reversal suggests the USD is set to resume the implied target of a symmetrical triangle, retesting the March 9 low.

erased all of yesterday’s losses even with risk-on back in effect, due to dollar weakness. 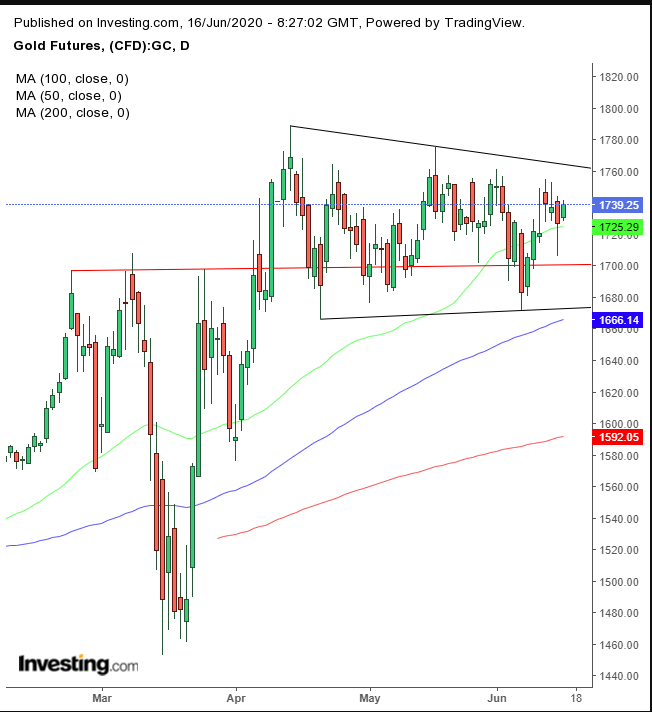 The precious metal has resumed range-trading. A H&S continuation pattern suggests the range will experience a topside breakout. 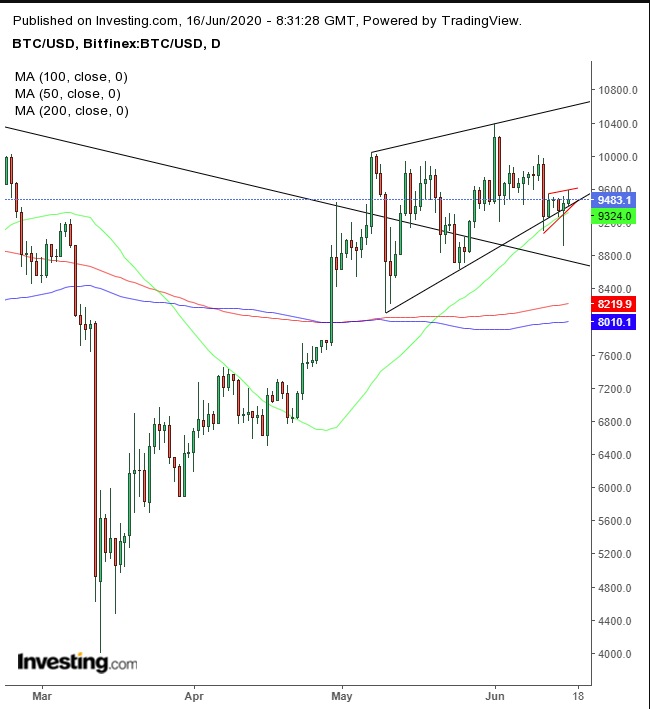 The cryptocurrency’s potential rising-flag is struggling against the bottom of a possible rising-wedge. If a downside breakout occurs, it would threaten a return below the downtrend line since last June, after surviving above it for nearly three weeks.

Reduced production, plus new stimulus possibilities, have reenergized the market…for now. Of course, global health concerns could always pressure it lower yet again. 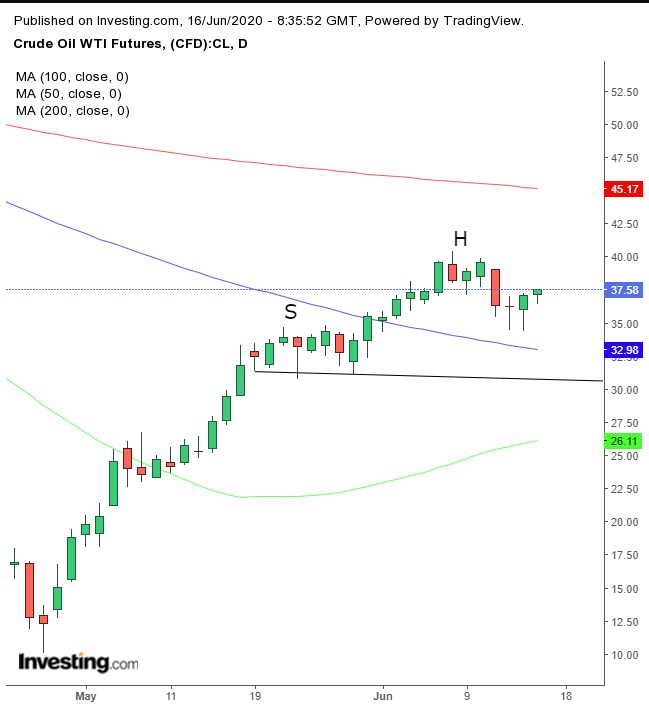 Coronavirus lockdown could ‘deal fatal blow’ to HIV in the UK

Portfolio Too Locally Focused? Try These Canada And Russia ETFs