Like two forces converging from the opposing ends of a spectrum, a court ruling for a Virginia-North Carolina pipeline and the looming bankruptcy of Chesapeake Energy (NYSE:) drew the natural gas market into symmetrical focus on Monday.

And what did prices do? They dipped on unrelated matters, like downward revisions of summer-temperature forecasts and falling .

Market actions aren’t necessarily a lateral interpretation of news and politics all the time. And natural gas, like any market in the pandemic era, is facing one of its most uncertain times.

Yet, the Supreme Court ruling over the embattled Atlantic Coast Pipeline and Chesapeake Energy’s impending bankruptcy are greater industry events that deserve telling, regardless of their immediate impact on NYMEX Henry Hub gas futures. 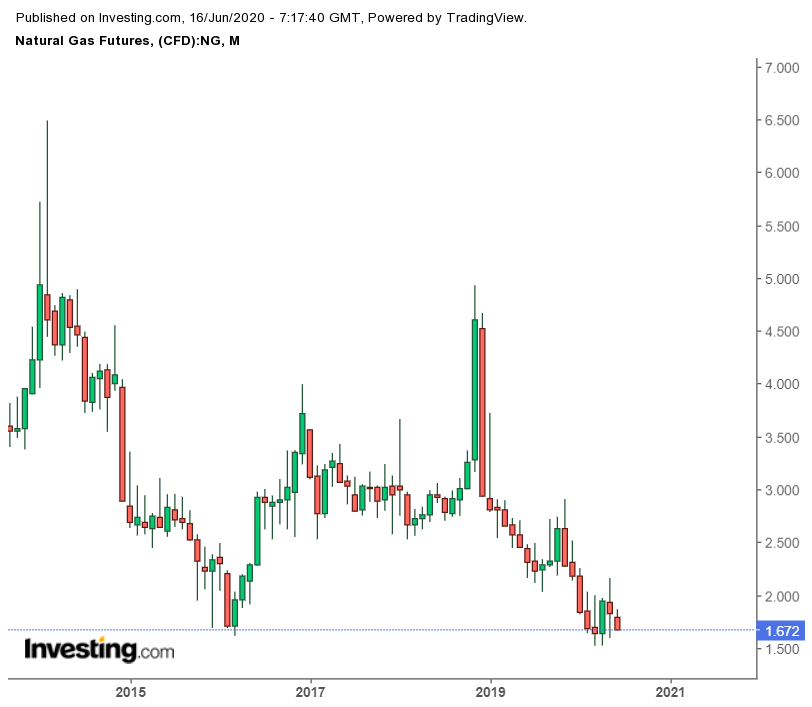 For the record, the US Supreme Court reversed a lower-court decision that found the 604-mile, 1.5 billion-cubic-feet-per-day ACP project was in transgression of the Appalachian National Scenic Trail which it ran under.

Designed to run from West Virginia into Virginia and North Carolina, the ACP is being developed by Dominion Energy (NYSE:) as part of a joint venture with Duke Energy (NYSE:).

As Jeremiah Shelor at naturalgasintel.com said, the decision could prove pivotal in helping ACP avoid re-routing the $8 billion project, as it seeks to build a conduit for Appalachian Basin natural gas to reach markets in the Southeast.

“The ruling also has implications for the similarly routed Mountain Valley Pipeline (MVP).”

The case hinged on whether the Forest Service had the authority to issue a right-of-way for ACP to construct a 0.1-mile underground crossing of a portion of the Trail in the George Washington National Forest. The Supreme Court justices ruled 7-2 in favor of the pipeline.

As the Wall Street Journal put it, it was the biggest court decision yet, in terms of the win for energy companies in a nationwide legal fight over the expansion of interstate pipelines and the use of fossil fuels.

Energy companies have met opposition from environmentalists concerned about climate change and the chance of more spills and leaks, as North America produces more oil and gas. That opposition has repeatedly blocked connections that producers need to continue unlocking new supply from the fracking boom.

Pipeline opponents, seeking to uphold a late 2018 ruling from the US Court of Appeals for the Fourth Circuit, argued that since the Appalachian Trail is administered by the National Park Service and it is exempted from USFS authority to permit the proposed crossing.

For the dissent, Justice Sonia Sotomayor, joined by Justice Elena Kagan, said the ruling “condones the placement of a pipeline that subverts the plain text of the statutes governing the Appalachian Trail.”

ACP spokesperson Ann Nallo hailed the ruling as “constructive” for both ACP and MVP.

Still, more work remains for the two transmission pipelines, which have followed parallel tracks of intense scrutiny in the courts since receiving FERC certificates in late 2017.

The long-delayed Keystone XL oil pipeline from Canada has been waylaid for a decade by federal reviews, the courts and fights in front of state commissions. And the Atlantic Coast Pipeline is one of several long-haul natural-gas projects that need to overcome hurdles in the Eastern US, where some states have joined the fight to keep new pipelines from taking a glut of Appalachian gas to New York, New England and the Southeast.

Chesapeake Energy was due to file for bankruptcy as early as this week, according to , making it the largest oil and gas producer to unravel from the market rout caused by the coronavirus outbreak.

Tom Haywood at Energy Intelligence in Houston said that what could ultimately save the fifth-largest US gas producer would certainly roil one key energy sector: the vast midstream pipeline network with which Chesapeake has contracted billions of cubic feet per day of capacity to move gas and natural gas liquids to market.

In the event of a bankruptcy filing, Chesapeake could seek to unload large holdings in five states, including the gas-rich Haynesville Shale acreage in Louisiana and oil-rich properties in South Texas, in a court case of epic proportions. And that could get messy for midstream operators as they adjust to a new reality.

“A lot of commitments producers signed on to at the time were pretty expensive, and you can’t do this without the midstream operators giving up more.”

Conventional wisdom holds that Chesapeake would do well to sell its non-Appalachian assets and use the proceeds to pay down a substantial chunk of its debt.

With Henry Hub futures looking set to enter the $3 per mmBtu-range starting next winter, Rajendran said Chesapeake could do well to refocus its efforts on natural gas.