Home Investments Bitter Or Sweet? The Prospects For Cocoa Are Wrapped Up In COVID-19

The chocolate bar isn’t under attack from coronavirus, at least, not yet. But demand for luxury items and foods — and chocolate is one — could take a hit if there’s another worldwide wave of COVID-19.

There’s no threat yet to the current harvest, but cocoa picking could slow too in the coming season if West African farmers are forced to stay away from their crops. The chain reaction would be less processing or grinding, of cocoa beans and that could result in less chocolate manufacturing.

In the first instance, if demand weakens, could fall further from the two-month low of $2,307 a tonne struck in New York on Tuesday. On a seasonal basis, US-traded cocoa prices are at their lowest since 2013.

In the second, however, lower production could stave off deeper price losses and allow the market to stabilize or even rally. 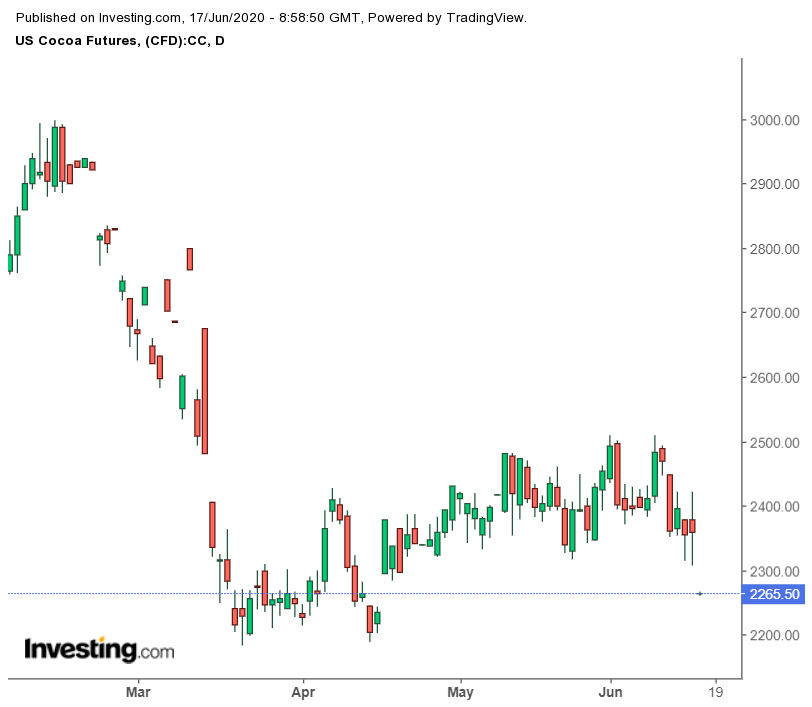 Neither Demand Worry, Nor COVID-19 Going Away

“There are a lot of demand worries, as the coronavirus is not going away and could be making a comeback in the US,” said Jack Scoville, vice president at the Price Futures Group brokerage in Chicago, where he tracks other “soft commodities,” such as cocoa, , and .

“Harvest is now over for the main crop in West Africa and the results so far are very good,” Scoville added in a Tuesday note on cocoa.

“The reports from West Africa imply a big harvest in the region. However, the mid-crop could be less due to dry weather earlier in the season.”

What Scoville doesn’t add is that the mid-crop’s potential could be worse if the COVID-19 outbreak in West Africa reaches new worrisome levels.

Confirmed cases in top grower Ivory Coast are estimated at around 6,000, according to data from Johns Hopkins University. While this may seem low in absolute terms, it has shot up from single-digit cases in the last month alone. In neighboring Ghana, the world’s second-largest grower, confirmed cases have risen at a similarly rapid rate, up to more than 12,000 at the latest count.

Farming And Marketing Complicated As Well

Data collected at 35 key transit points across West and Central Africa by the International Organization for Migration (IOM) indicate regional migration has dropped by nearly 50% during the first half of 2020 (compared with 2019), due to government travel restrictions to prevent the spread of the COVID-19 virus.

But the data also reflects the double burden that low- and middle-income countries bear at this time. The response to COVID-19 has caused great disruption to cross-border mobility and trade. The World Bank is projecting remittances to sub-Saharan Africa will drop 23%.

“The virus has complicated farming and marketing efforts,” said Scoville.

“Ideas are that deliveries can be slower on any contracted cocoa and that the next crop could suffer as workers stay away. The and helps keep workers from grinding facilities and chocolate manufacturers.”

Grindings Down, Costs Up; But Sandy Prices Stay Sweet

Global processing of cocoa declined in the first quarter, due to falling demand for chocolate from retail outlets that were shuttered across the globe because of the coronavirus outbreak, surveys conducted by Bloomberg indicated.

US grinds fell from 121,801 tonnes in the fourth quarter of 2019 to 115,591 tonnes in the first three months of this year, down 5%, according to data from the US National Confectioners Association.

European grinds fell marginally to 100.9 tons in the first quarter of this year from 103.3 from the last three months of 2019, the European Cocoa Association said.

The spot contract for cocoa futures in New York hit a one-year low of $2,183 in March, as the United States went into full lockdown for the first time over coronavirus.

At the same time, Ivory Coast and Ghana imposed a premium of $400 a metric ton for a so-called living income differential for the 2020-21 cocoa crop, which boosted costs for processors.

Disclaimer: Barani Krishnan does not own, or hold a position in, the commodities, or securities, he writes about.

Ayesha Curry Talks Putting People Of Color At The Forefront With Her New Brand,...

Joint statement of the members of the EEA Council, 25 May...