Just as pre-summer heat begins building, which would ordinarily be a boon to demand, struggling LNG exports have struck another vicious blow to the heart of the gas bulls who were already concerned about another potential wave of coronavirus.

After an 11% drop over three straight sessions, Henry Hub futures recovered on Wednesday. But that was not before the struck a 3-month low of $1.597 per million metric British thermal units. 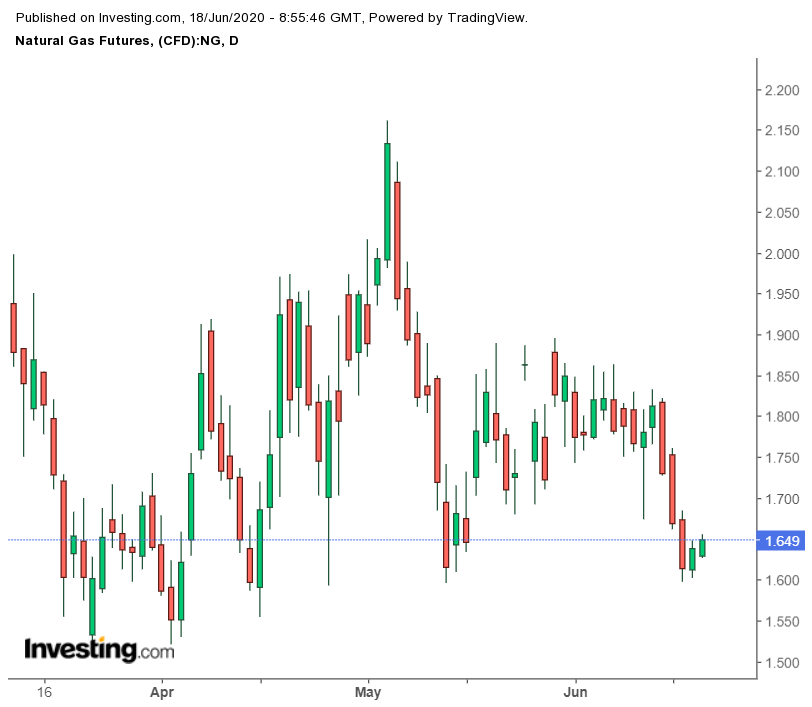 The cash gas market was in worse condition, deteriorating below more than two decades of higher prices, settling at $1.38 per mmBtu. That collapse came on the back of weak demand for that drove LNG feed-gas deliveries along the Gulf Coast to 14-month lows.

On the futures market, the premium of the January 2021 over the July 2020 contract expanded to $1.31, the largest it has ever been, a structure known as “contango” that can indicate near-term market pessimism.

“This reflects severe, short-term bearishness pitted against premium pricing expectations for 2021,” Dan Myers of Houston-based gas consultancy Gelber & Associates wrote in an email to the firm’s clients on Wednesday, a copy of which was made available to Investing.com.

Worry over gas shipments has weighed heavily on Henry Hub pricing over the past two months.  Spot LNG itself reached an all-time low of $1.85 per million British thermal units at the end of May. As with , the gap between supply and demand was already substantial before the coronavirus lockdowns made it even worse. Reflecting the difficult conditions for LNG exporters, a slew of cargoes destined for Asia and Europe were canceled, which pushed gas-flows into LNG export facilities to 13-year lows.

Now, the industry is facing concerns over another wave of coronavirus infections. New COVID-19 cases in Beijing hit 106 on Tuesday, with 29 communities in the sprawling Chinese . While the number of cases are small, it is still a worrying resurgence for a city that enjoyed almost two months without a single new infection.

In the United States, nine states — namely Alabama, Arizona, Florida, Nevada, North Carolina, Oklahoma, Oregon, South Carolina and Texas — reported either new single-day highs, or set a record for seven-day new coronavirus case averages. At least 115,000 people in the United States have died of the coronavirus, and more than 2 million cases have been reported since January.

To be sure, what happens inside in the United States doesn’t affect demand for gas elsewhere. Yet, with COVID-19 being the scourge that it is, any slowdown in the reopening of the US economy could disrupt the LNG supply chain and slow the flow of natural gas exports.

Naturalgasintel.com alludes as much as in a report issued Wednesday. Kevin Dobbs, associate editor at the portal, wrote:

“Exporters need stronger demand from Europe … but that could prove elusive for some time.”

Myers, of Gelber & Associates, adds that the current disarray in the global LNG market, which has been plagued by a glut of unused fuel that has been made worse by cancellations of US cargoes, has cast uncertainty over future project investment.

He cites Houston-based Tellurian (NASDAQ:) as an example:

“Construction on Tellurian’s Driftwood LNG terminal has been delayed to at least 2021, pushing the terminal’s expected completion date from 2023 to 2024.”

“Additionally, Tellurian has hinted towards scrapping its $7 billion, – 5 bcf/d Permian Global Access Pipeline (PGAP) due to lower growth expectations from the Permian, which are caused by reduced drilling and the collapse of WTI.”

“International competition and low global demand, as well as continued economic uncertainty, are limiting additional US investment in LNG and other large infrastructure developments.”

Concern about the outlook for the LNG market has resurfaced just ahead of the Energy Information Administration’s numbers. According to a consensus of analysts tracked by Investing.com, utilities injected 85 billion cubic feet into storage for the week ended June 12, roughly in line with the seasonal average.

That compared with an increase of 111 bcf during the same week a year ago and a five-year (2015-2019) average build of 87 bcf for the period. Utilities injected 93 bcf of gas into storage in the previous week. 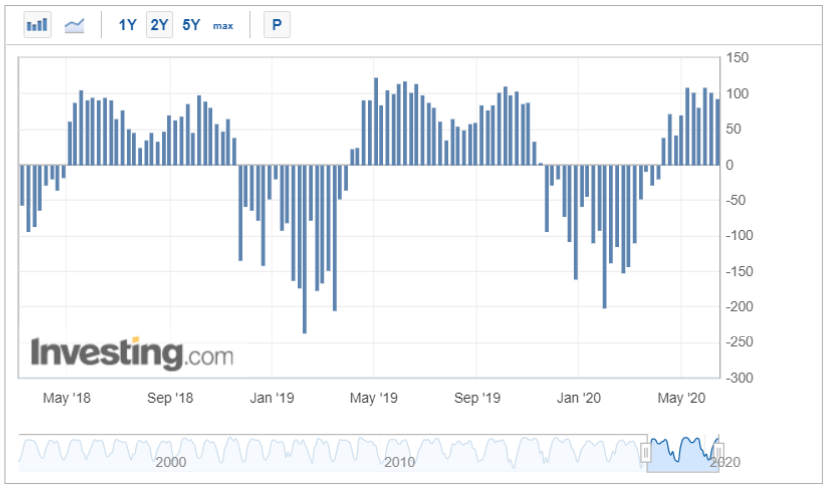 If analysts are on target, the increase during the week ended June 12 would boost stockpiles to 2.892 trillion cubic feet. That would be 16.9% higher than the five-year average and about 33.3% above the same week a year ago.

Still, the weather may prove to be friendly to natural gas bulls.

Above-normal temperatures will build across the Northeast later this week and generally persist, forecasts show.

“A warmer pattern will build in beyond day 5 for most of the US, but significant summer heat is not expected,”  said Dominick Chirichella of the Energy Management Institute in New York.

“Temperatures should generally be somewhat above normal across most of the US during the day 11-15 period. The warmth should be most significant in the interior Southwest, but it could transition to the Midwest/Northeast late in the period.”

*Disclaimer: Barani Krishnan does not own or hold a position in the commodities or securities he writes about.

Market makers and authorised primary dealers who are using the exemption under the SSR...