US futures for the , , and traded lower at Thursday’s open, as did European shares, before reversing higher, as the persistent rebound in coronavirus cases continues to weigh on markets, overshadowing the most recent round of stimulus talk by both government and monetary policymakers.

Yields are falling and the dollar is rising. Oil is trading higher after slipping earlier today.

Contracts on the S&P 500 bounced off session lows. However, technicals still suggest the underlying, index will extend yesterday’s decline. 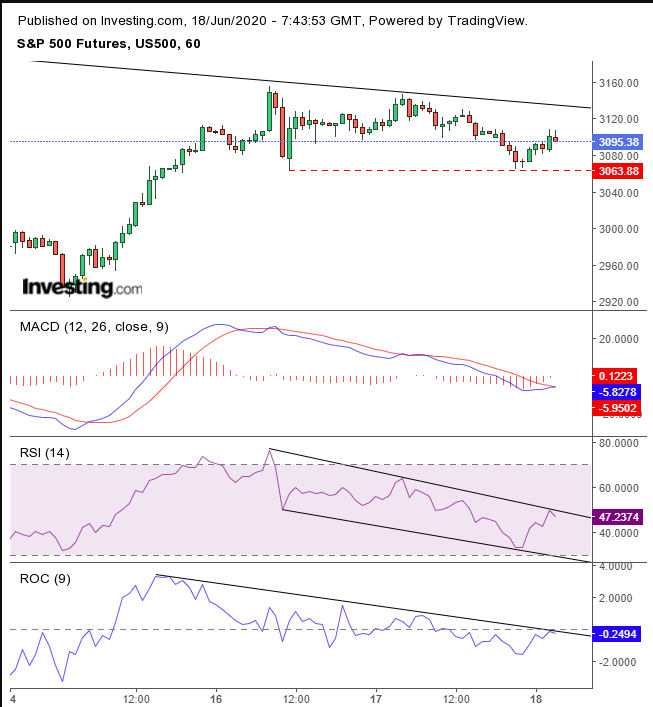 The e-mini S&P is developing a shooting star on the hourly chart, increasing the likelihood of a downside breakout of the 3,060 level, topping out and threatening to retest Monday’s lows.

The opened in the red this morning and extended the drop, barely limped higher, only to head lower at the time of writing. Travel companies and mining shares were among the laggards. 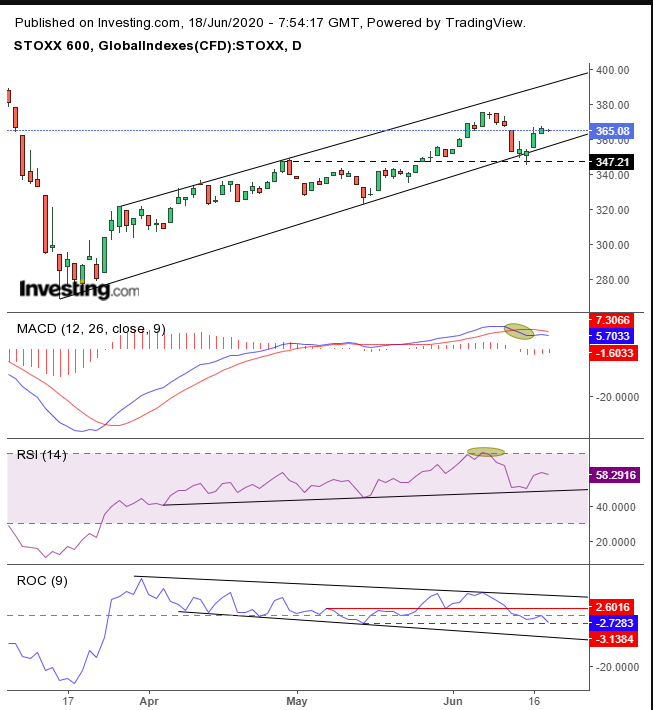 The pan-European index has been struggling to make new highs. Traders are wondering whether the June 8 peak will be retested, and whether the rising channel since the March low is even sustainable. That’s especially concerning after bulls almost gave up on Europeans stocks, allowing the index to fall below the rising channel on Monday in daily trading. Indicators are demonstrating a gradual weakening of prices and momentum.

Earlier Thursday, almost all Asian benchmarks were in the red, after Wall Street’s volatility on Wednesday when the two final hours of the New York session pushed US stocks into negative territory. Still, as seems to frequently be the case, China’s outperformed, (+0.1%), despite the Asian nation being embroiled in a trade war, along with global accusations of a Sino government pandemic coverup and what seems like a second wave of COVID-19 in Beijing,  prompting the government to shut schools and halt flights.

Australia’s lagged, (-0.9%), after the May in the land down under came in above 7%; or, as the Australian Bureau of Statistics noted, above 9% if those no longer officially looking for work were also counted. As well, May numbers printed significantly worse than anticipated.

Yesterday, the S&P 500 closed lower, (-0.4%), for the first time in four days. Real estate and financial shares led the declines.

Perhaps investors are searching for a fresh catalyst they can trust amid the merry-go-round of market sentiment that keeps circling between optimism of a speedy economic recovery buttressed by stimulus, which then flips to pessimism when rising coronavirus cases signal the likelihood of more economic pain ahead. Rinse and repeat.

All we know is that market very clearly illustrates this cycle most succinctly: 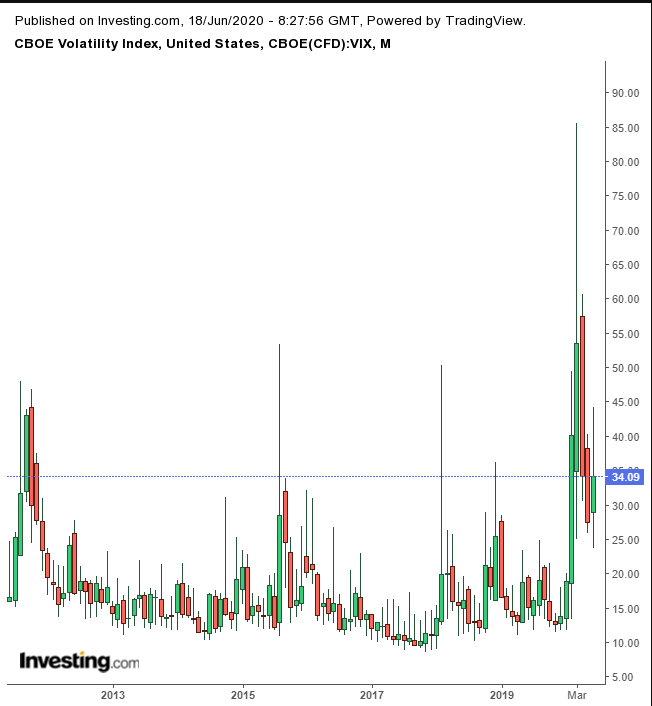 Taking the broader view: even after the strongest rally in years, traders are still betting on further market unease, even without counting the recent spike during the February-March, coronavirus-fueled equity crash, of course. We find that to be both interesting and a significantly dissonant from the V-shaped recovery narrative that continues to perpetuate.

Yields, including for the US Treasury note, are falling for a second day as increasing demand for bonds attracts more foreign buying. 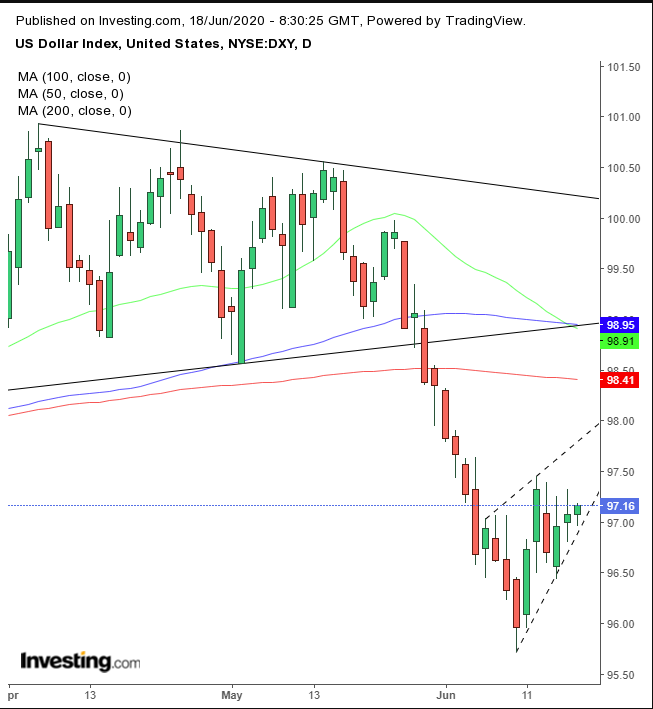 This has pushed up the dollar index for the third straight day, the longest winning streak for the USD in over six weeks. Technically, the greenback resumes a rising flag, considered particularly bearish after the plunge that preceded it.

headed lower for a second day 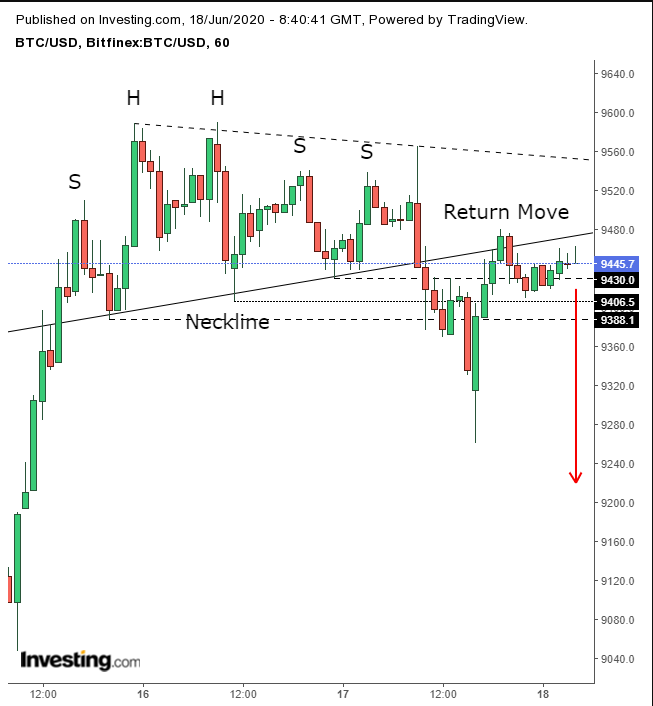 The cryptocurrency is attempting to climb over the for a second time.

Renewed fears of additional coronavirus escalation weighed on prices as markets grapple with how all this will that usually see increased activity—and demand—during the summer months. 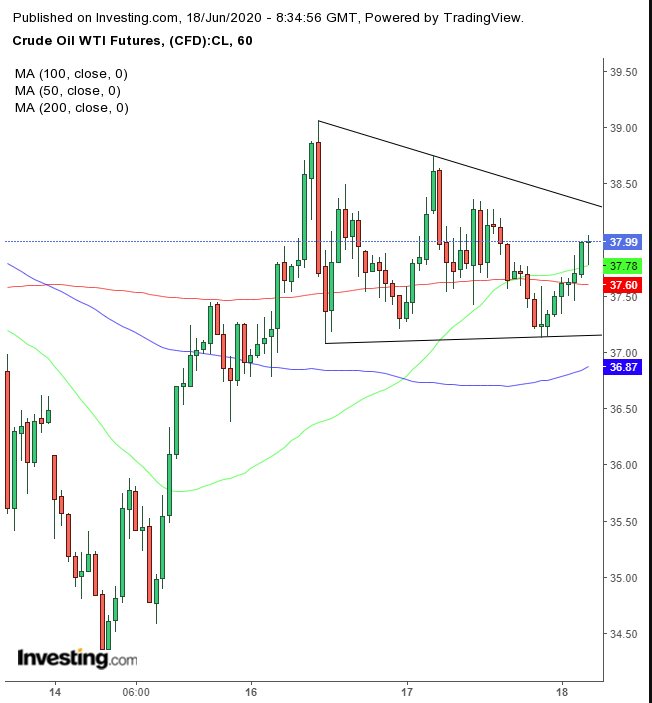 The price of WTI was flat as it rebounded from a decline. Technically, selling has been overcoming buying. If this continues, we expect oil to fall toward $35.

Covid: What is the Oxford vaccine and how does it work?