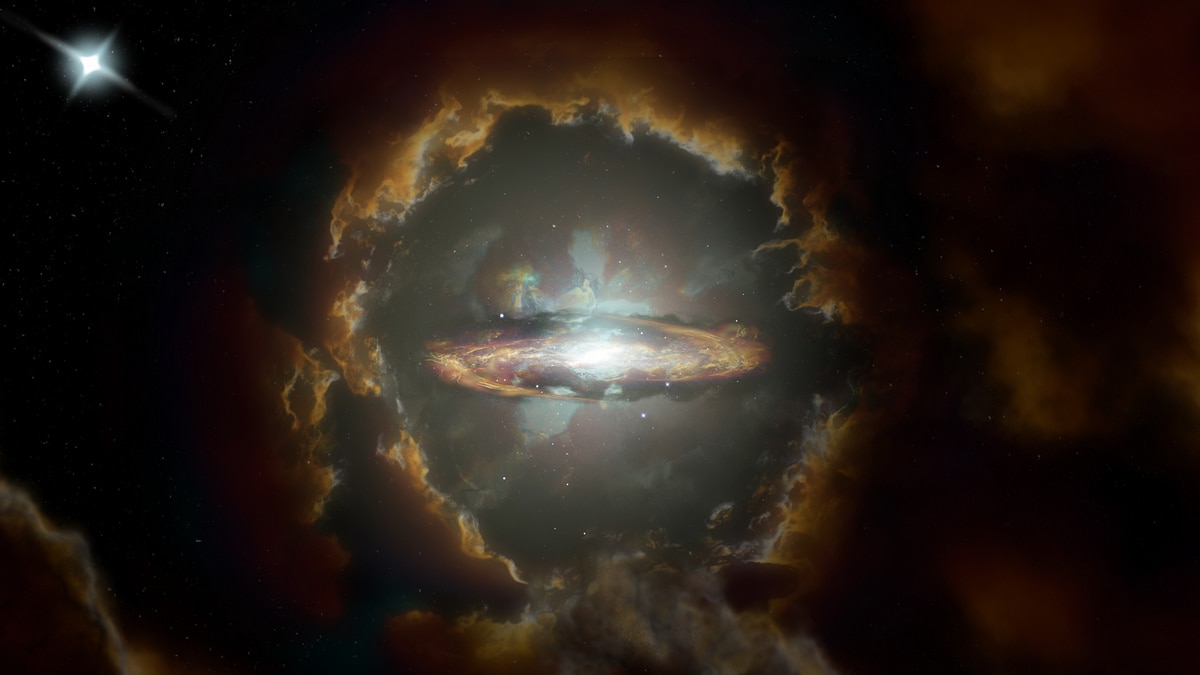 Astronomers have discovered the oldest and farthest disk galaxy ever that is challenging the current understanding of how galaxies were formed in the early universe. So far, the studies have found that these massive systems, consisting of stars, gases, and dust, took their shape slowly and gradually over billions of years because at the beginning of the universe, a galaxy evolved through a “violent” process. However, the newly found “DLA0817g” galaxy, nicknamed Wolfe Disk, has now been found to have taken the shape of a well-formed disk at an early stage.

While the universe is 13.8 billion-years-old, galaxies did not take their current refined shape at that time. It happened at a slow and steady pace. It is understood that there was a lot of collision and merger involved in the formation of galaxies, thereby giving them an irregular structure. These galaxies started taking the shape of a “well-formed disk” only around 6 billion years after the formation of the universe.

However, when light from the Wolfe Disk galaxy, travelling for about 12.3 billion, was seen through Atacama Large Millimeter/submillimeter Array (ALMA) telescope, it displayed the galaxy as it was just 1.5 billion years after the Big Bang. What astronomers observed confirmed that Wolfe Disk galaxy took the shape of a rotating disk galaxy when the universe was only ten percent of its current age. The Wolfe Disk is rotating at the speed of 272 kilometres per second.

This new discovery could force researchers and astronomers to remake the galaxy formation simulations. Through discoveries and observations, a belief has formed that these galaxies formed through mergers of many smaller galaxies. “Most galaxies that we find early in the universe look like train wrecks because they underwent consistent and often ‘violent’ merging. These hot mergers make it difficult to form well-ordered, cold rotating disks like we observe in our present universe,” said lead author of the study Marcel Neeleman. The study was published in Nature.

Researchers are trying to understand the process that the galaxy went through to gain such a shape at an early stage. “One of the questions that remains is how to assemble such a large gas mass while maintaining a relatively stable, rotating disk,” co-author of the study J. Xavier Prochaska said.

It is now believed that these “early rotating disk galaxies” are not as rare as previously thought and that many more of them are scattered in the universe.

Coronavirus: Total deaths in England and Wales down

BHP Or Rio Tinto: Which Mining Giant Is The Better Buy?

US Dollar Swings on NFP Report Beat, Unemployment Below 9%

7 Signs You Haven’t Found Your Calling Yet

My Space: Where Do You Work?

What to Watch Out For