Equity bulls had been given a boost following the June flash PMI’s, which showed France moving into expansionary territory, while the German PMIs had beat expectations, despite remaining in contraction territory. However, while this data may be falsely interpreted as signaling a “V” shaped recovery, it merely highlights that economic activity has improved, which one would generally expect as economies re-open. That said, while greater clarity will be found in the hard data, the fact of the matter is that the market likes what it sees with the DAX rising to session highs, having jumped 2.5%.

With the bounce off the 200DMA, the DAX looks on course to make a test of the post Q1 sell-off peak at 12880. Momentum signals also remain supportive for the DAX in the short-run. However, we are also cognisant of rising concerns pertaining to a potential second wave of coronavirus cases, in which the Premier of North-Rhine Westphalia will go ahead with a lockdown for Guetersloh following a recent COVID outbreak. As such, while the DAX may challenge the recent high, there are risks of a notable pullback. 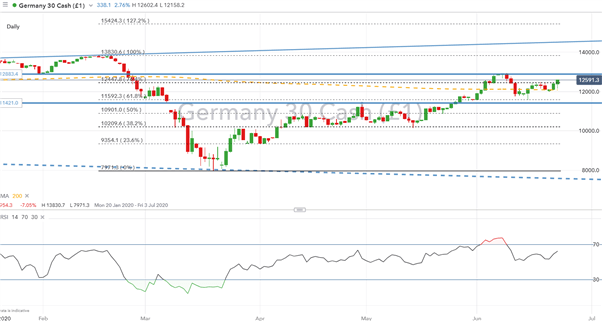 Having made a break above 3300, the Euro Stoxx 50 now places its attention towards a retest of the 200DMA. This will likely be the pivotal point for the index, with a firm break above, raising the risk of a move to 3500, which also roughly coincides with the 76.4% Fibonacci retracement of the Q1 sell-off. That said, a failure at the 200DMA hurdle once again could 3200 come into focus. 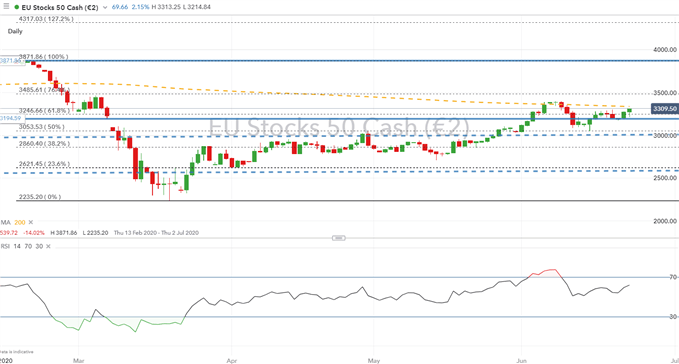 Chart Of The Day: Big Move On The Way For Small-Cap Russell 2000