US futures for the , , and all dropped along with global stocks on Thursday, as a spike in US coronavirus cases, plus renewed eruptions globally led the International Monetary Fund to downgrade its forecast for any recovery of the global economy. “In the absence of a medical solution, the strength of the recovery is highly uncertain and the impact on sectors and countries uneven,” the IMF said in a blog post published yesterday. In addition, comparing Wednesday’s release with a note the organization posted in April, “we are now projecting a deeper recession in 2020 and a slower recovery in 2021.”

Oil extended a slide. Treasuries and the dollar were pushed higher.

Contracts on the four major US benchmarks were deep in the red, with NASDAQ futures down 0.8% at one end of the spectrum, while Russell 2000 futures were -2.1%.

The pan-European was dragged sharply lower at the open by media and travel stocks. However—and counterintuitively amid rising odds of another lockdown—German airline Lufthansa AG (DE:) surged 21% after its shareholders agreed to a 9-billion-euro which would give the country a 20% stake in the business. 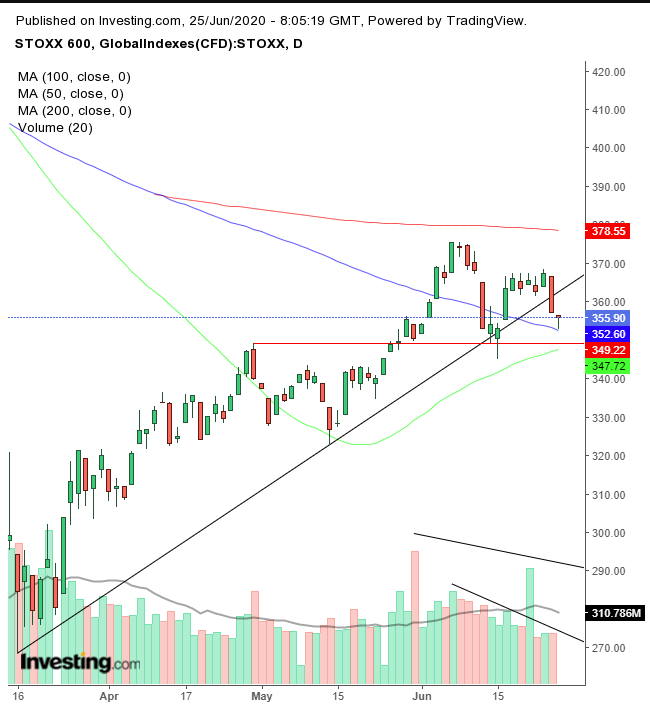 Though the index is currently clawing its way higher, European shares had been falling for the second day, after finding support by the 100 DMA, if they close at these levels. Still, the uptrend has been growing weaker, as the benchmark closed yesterday, for the first time, below its uptrend line from the March low, after failing to post a higher price above the June 5 high, possibly confirming a resistance of the 200 DMA.

Volume has been slumping. The MACD entered bearish formation and the RSI may be topping out. A drop below the June 15 low would establish a downtrend.

South Korea’s came in close behind, (-2.3%), after the government proposed expanding taxes on capital gains. And once again, China’s outperformed, (+0.3%). Indeed, it was also the only regional benchmark in positive territory, on investor hopes of COVID-19 outbreak control.

Here’s how drastically investors have pivoted from utter disregard of the pandemic to the current laser-focus on it and nothing else: Chinese shares rose even amid rising border tensions with India and ongoing trade uncertainty with the US.

China reasserted its sovereign claim over athe Galway Valley region vs India, even as foreign ministers from both countries attempt to lower the flames. China’s defense and foreign ministries both asserted that India had violated “bilateral agreements’ international rules and provoking the clash.”

In the US, the COVID-19 case count accelerated, rapidly heading toward 2.5 million, with almost 122,000 deaths. The University of Washington forecasts 180,000 fatalities by October.

More than 13,000 federal workers face the risk of a 30-day or longer furlough as the topic of new lockdowns is considered. As well, today’s US print is expected to top one million.

(NYSE:), which had planned to open its Florida and California resorts and theme parks on July 17 has now postponed reopening them indefinitely.

During yesterday’s New York session, US stocks fell, as data showed that Florida and California had each hit new daily records for COVID-19 cases, altering the scenario for the much-anticipated reopenings. The sank, (-2.6%) with all 11 sectors finishing lower. Even the mighty fell, for the first time in nine sessions.

Treasurys climbed for the first time this week, with yields—including for the benchmark note—falling for a second day. 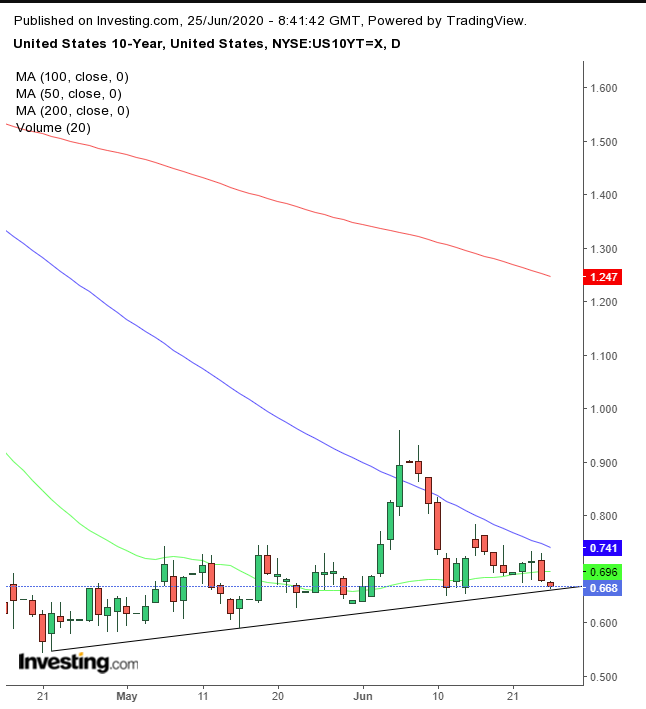 They’re nearing the uptrend line since the May 21 low, the lowest since May 15.

After yesterday’s surge, the is gaining again today. 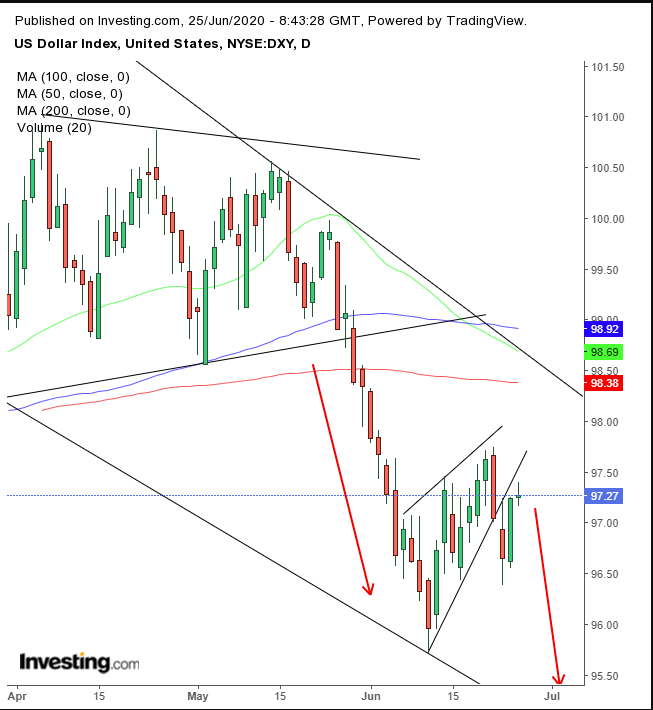 However, today’s fluctuation demonstrates resistance after .

slipped for a second day, a mirror image of the USD. 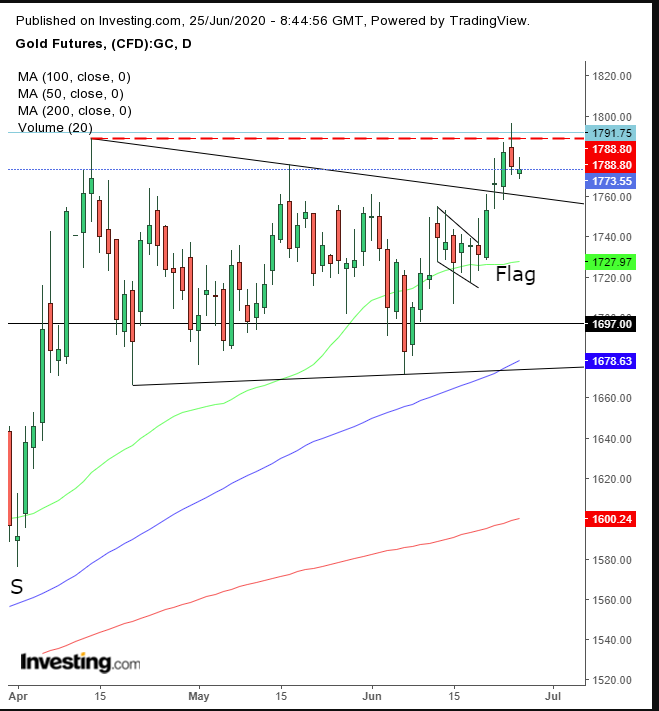 Nevertheless, we remain on the yellow metal.

has been heading lower today. 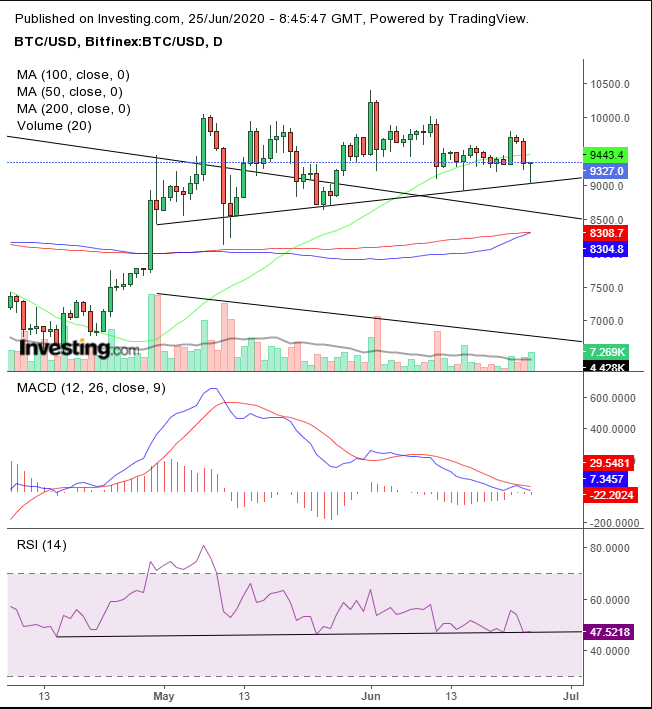 The cryptocurrency bounced off the neckline of a potential H&S top.

is slumping for a third day, as worries ramp up regarding limited reopenings if not outright lockdowns, all potentially leading to rising . The commodity’s price is facing too. 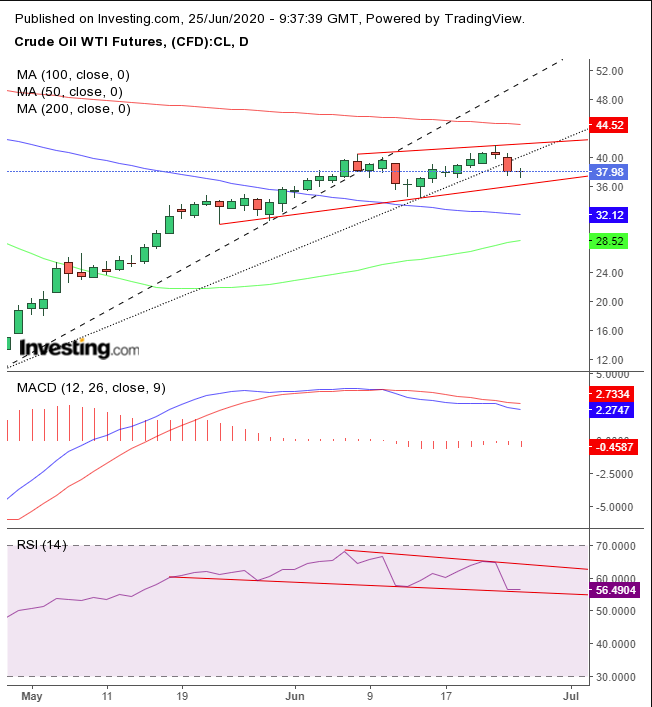 WTI is declining as the MACD provided a sell signal and the RSI a negative divergence.

How To Find Clarity When Your Next Step Is Uncertain