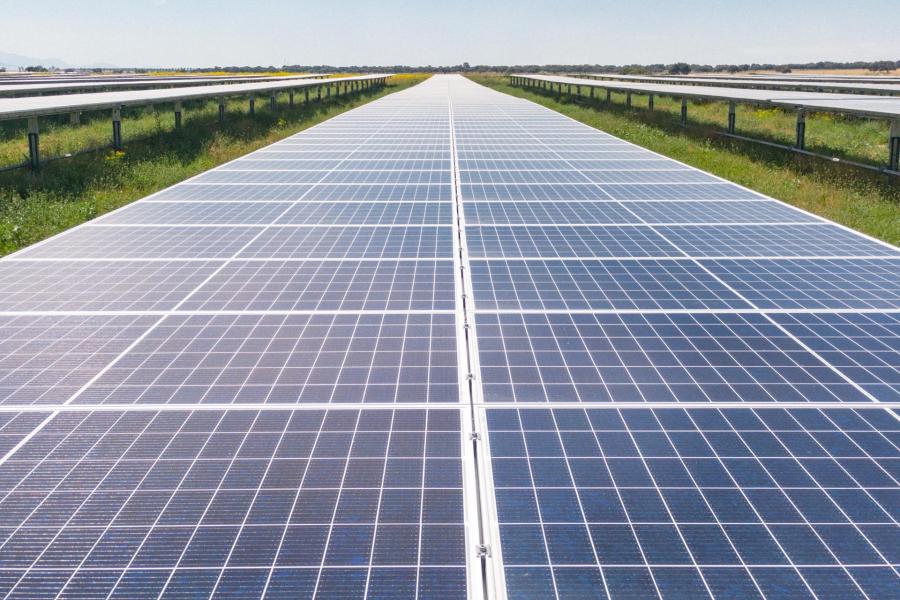 The European Investment Bank (EIB) is investing €43.5 million to finance the largest solar project in Andalusia and one of the most powerful in Spain. Despite the COVID-19-related lockdown in Spain, over 85% of the construction plan was successfully completed by May 2020. This investment, backed by the European Fund for Strategic Investments (EFSI), the main pillar of the Investment Plan for Europe, will contribute to Spain’s green recovery and will create around 350 jobs during the implementation phase in the transition region of Andalusia.

The Cabrera Solar Project includes the construction and operation of four 50MWp photovoltaic solar plants in Alcalá de Guadaira, Seville. The four plants will provide enough clean energy to supply nearly 145 000 households per year and will contribute to reducing CO2 emissions by 300 metric kilotons (kt) CO2-equivalent per year. It will have a significant impact on the Spanish renewable energy market, helping the country to meet the government’s objective of generating 20% of all the country’s energy needs from renewable sources by the end of this year. Moreover, the Cabrera Solar Project will contribute to meeting the European Commission’s target of ensuring that at least 32% of Europe’s final energy consumption comes from renewables by 2030.

“As the EU climate bank, we are committed to investing in green recovery in Europe, building sustainable infrastructure while spurring the creation of green jobs. Spain is a market with huge potential for renewable energy and the EU bank is proud to support the investments needed to meet the country’s renewable energy targets,” said EIB Vice-President Emma Navarro, responsible for climate action at the Bank and for operations in Spain. “Despite the economic challenges caused by COVID-19, we should not forget that climate change still represents one of the biggest threats to our future.”

Paolo Gentiloni, European Commissioner for the Economy, said: “With the EU’s financial support, almost 145,000 Spanish households stand to benefit from clean energy, drastically reducing the CO2 emissions of the Andalusia region. The project will also provide the construction and engineering sector with 350 jobs in the short term. With every investment of this kind, we take another step closer to our goal of making the European Union climate neutral by 2050.”

The project, sponsored by Encavis AG and developed by Solarcentury, secured senior debt facilities for an aggregate amount of €96 million from the EIB, Deutsche Bank and Rabobank, and reached financial close in June 2020. As for the construction and operation of the Talayuela solar plant, also financed by the EU bank, sponsored by Encavis AG and Solarcentury and developed by Solarcentury, also the Cabrera Solar Project is a greenfield renewable energy project financed without any form of government or public support and entirely relies on revenues from the sale of electricity. The Project entered into a Power Purchase Agreement (PPA) with Amazon.com Inc., which hedges the off-take price for a significant volume of the energy production. The EIB will contribute to the crowding-in of other investors and private lenders, while EFSI will provide the long-term non-recourse debt financing, crucial to ensuring the viability of the project.

The EIB is the world’s largest multilateral provider of climate finance. Its goal is to be a leader in mobilising the finance needed to limit the average global temperature increase to 1.5°C compared to pre-industrial levels to meet the Paris Agreement objectives. On 14 November 2019, the EIB’s Board of Directors approved its new climate objectives and the new energy lending policy. The Bank will gradually increase its financing for climate and environmental objectives by up to 50% by 2025, to ensure that the EIB Group mobilises at least €1 trillion in the critical decade between 2021 and 2030 to promote investments helping to meet these objectives. It also announced its intention to align all EIB Group activities with the Paris Agreement. To this end, the EIB will cease financing fossil fuel-based projects from late 2021.

Over the past five years, the EU bank has provided around €62 billion to finance energy infrastructure. This included over €53 billion for renewable energy, energy efficiency and electricity grid projects in Europe and around the world.

Established in 1998, Solarcentury is a leading global solar power company that develops, constructs, owns and operates utility-scale solar and smart technology across Europe, Latin America and Africa. Independent and headquartered in the UK, Solarcentury is known internationally for developing and building some of the largest utility-scale solar projects in the UK, the Netherlands, Spain, Kenya and Mexico, including pioneering projects such as the world’s first solar bridge at Blackfriars Station in Central London. Solarcentury’s mission is to make a meaningful difference in the global fight against climate chaos by making solar power the dominant energy source worldwide. During Solarcentury’s 22-year history the business has helped solar power become mainstream, and our projects have generated 6 billion kWh of clean electricity, saving over 1.7 million tonnes of CO2 emissions.

Coronavirus: Total deaths in Scotland rise by a third between April and June

Gold: Hard To Be Excited With Dollar Index Above 93

IISc Researchers Working on Tool for COVID-19 Diagnosis Based on Cough,...