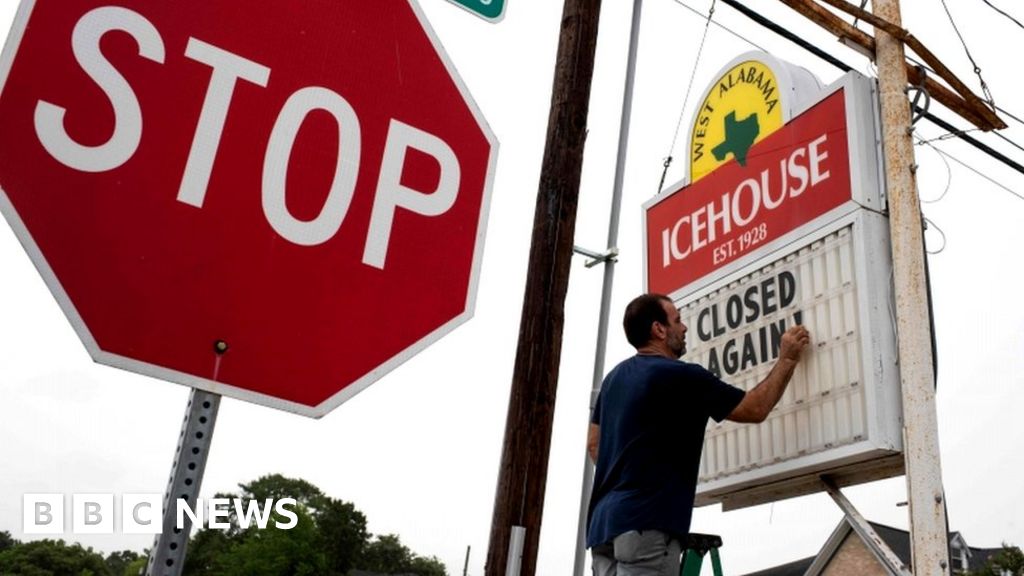 Coronavirus infections across the United States have passed 2.5 million, with record numbers of cases reported in the states of Florida and Texas.

The surge in cases in southern states comes after businesses were allowed to re-open in recent weeks.

On Saturday, Florida reported more than 9,500 new cases, up from almost 9,000 on Friday, the previous record.

The spike has led state officials to tighten restrictions on business again – as Texas also did on Friday.

The leading US government adviser on coronavirus, Dr Anthony Fauci, said last week that the country had a “serious problem”.

More than 125,000 Covid-19 patients have died nationwide – more than in any other country.

Speaking at the first White House coronavirus task force briefing in two months, Dr Fauci said on Friday that the current rises were due to regions “maybe opening a little bit too early” and to people themselves not following guidance.

“People are infecting other people, and then ultimately you will infect someone who’s vulnerable,” he said.

Vice-President Mike Pence – who heads the coronavirus task force – has called off campaigning events in Florida and Arizona this week. An unnamed campaign official told Reuters news agency Mr Pence was acting out of an “abundance of caution”.

The events were due to drum up support for President Donald Trump’s re-election bid.

Mr Pence is still expected to travel to the states to meet health officials, the Associated Press reports.

What is happening in Florida and Texas?

On Saturday morning, the state reported 9,585 coronavirus infections in the last 24 hours. It has set records for new cases almost daily since mid-June.

Many other southern and western states have reported record spikes as they moved to re-open and people from other areas poured in in recent weeks.

Last week, Texas, Florida and Arizona put re-opening plans on pause in an effort to tackle the outbreak.

But on Friday, Florida Governor Ron DeSantis imposed new restrictions, ordering bars in the state to stop serving alcohol on their premises – although it was not clear how the new measures would affect restaurants, the Miami Herald reported.

Miami Mayor Francis Suarez told the BBC on Saturday that the “sheer numbers are so high” that they are putting a huge strain on the city’s healthcare system.

“Right now we are penalising those who don’t wear masks,” Mr Suarez said, adding that he was looking at potentially implementing new measures: “We may have to, at some point, implement a stay at home order.”

And in Texas, which has also seen record numbers of cases this week, Governor Greg Abbott told bars to close and limited restaurants’ indoor seating capacity to 50%.

In the Texan town of Galena Park, east of Houston, the mayor imposed an overnight curfew on Saturday and warned that hospitals could soon be overwhelmed.

What is the overall situation in the US?

On Saturday, Johns Hopkins University said the total number of cases in the country had risen to 2,505,593.

While some of the rise was down to more extensive testing, the rate of positive tests in some areas is also increasing.

Health officials estimate the true number of cases is likely to be 10 times higher than the confirmed total. The US Centers for Disease Control (CDC) said up to 20 million Americans may have been infected.

The surge in cases was being driven by young people – those aged between 18 and 34 – testing positive, especially in the south and west of the US, said the head of the CDC, Dr Robert Redfield.

The White House has stressed that the situation is stabilising in most of the country.

Innovation for the benefit of consumers: Opening remarks by Gabriel Bernardino at the European...

Maintaining A Consistent Customer Experience In A Transition To A New...