The crushing squeeze on oil from the flare-up in cases of COVID-19 is likely to continue this week, as bears eye $35 a barrel and below for .

, by contrast, could have its best moment in nine years. The long-elusive $1,800-an-ounce target appears more likely than ever, as a new wave of coronavirus cases sends investors scurrying from risk markets into safe havens.

A 6% rebound in China’s —the first since May—helped restore some optimism over the global economic recovery. But US market sentiment remained on tenterhooks, despite indicating a mildly positive open for Monday.

“The trajectory of the COVID-19 pandemic in the United States continues to be a primary concern,” said Jeffrey Halley, senior markets strategist in Sydney for online trading platform OANDA.

“A global recovery requires both school-yard bullies to be taking the small kids’ lunches, not just one of them.” 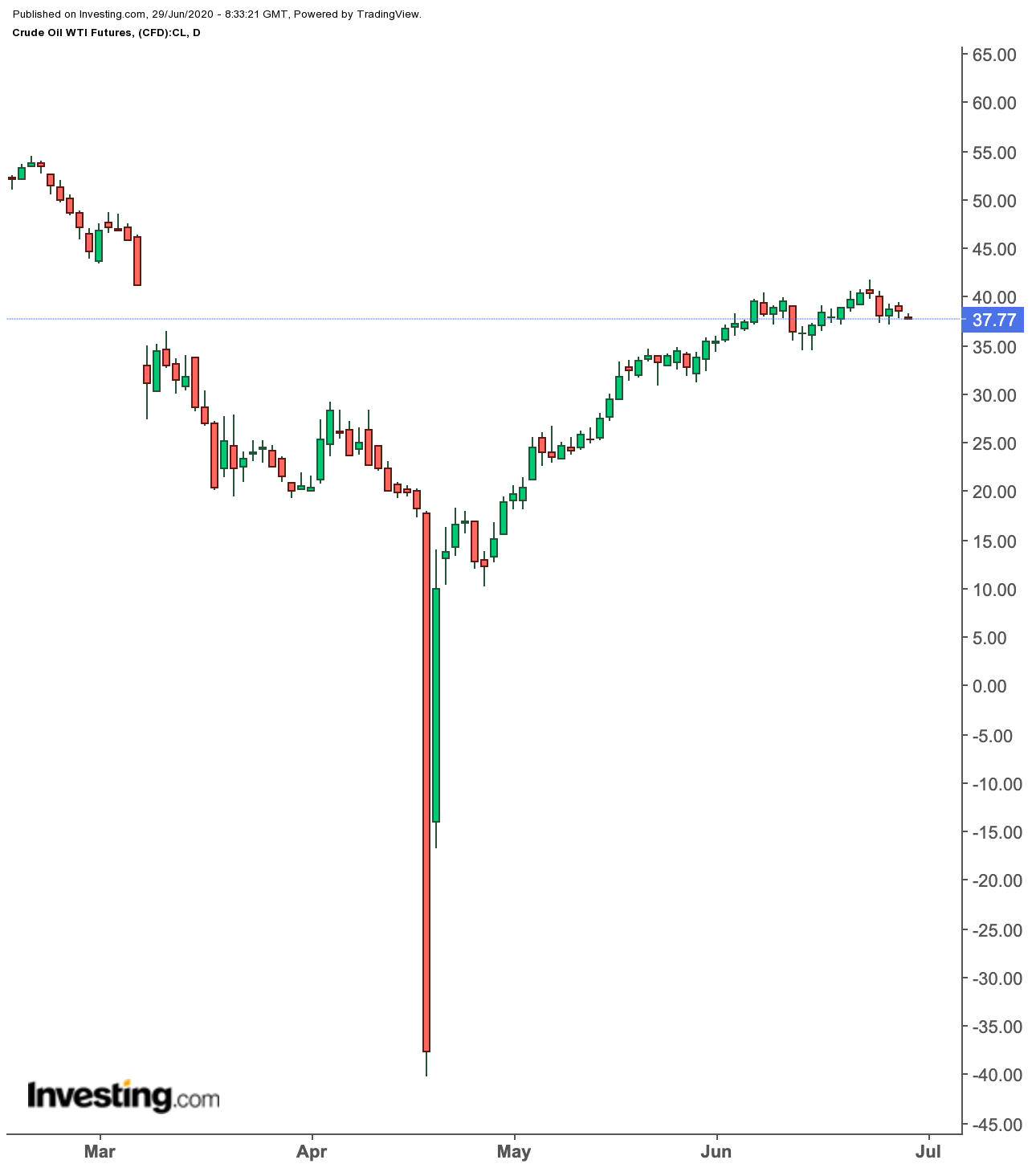 While the Trump administration continues to play down the second wave of the outbreak and the likelihood of another round of economic lockdowns, the reality on the ground is shaping differently.

In California, Governor Gavin Newsom on Sunday ordered bars that have opened in seven California counties, including Los Angeles, to immediately close and urged establishments in eight other counties to do the same, saying the coronavirus was rapidly spreading in those parts of the state.

In Texas, Governor Greg Abbott also shut bars down again and cut restaurant capacity to 50%. He also shut down river-rafting trips, which have been blamed for a swift rise in cases, and banned outdoor gatherings of over 100 people, unless local officials approve.

“A lot of this is about uncertainty as to how quickly people can get back to work,” Larry Milstein, senior managing director of rates trading at R.W. Pressprich & Co, was quoted saying in the Wall Street Journal, ahead of Thursday’s US June jobs report.

A consensus of analysts tracked by Investing.com shows that may have increased by as much as 3 million this month versus May’s growth of 2.5 million. Yet, with new infections either slowing, or freezing, altogether the reopening of certain industries that have been shut since March, the final picture on this month’s jobs situation could be less positive.

West Texas Intermediate, the benchmark for US crude, was down another 2.2% on Monday, adding to last week’s 3.4% decline.

“WTI crude has not been able to do much after capturing the $40 level and seems destined to continue to consolidate between the $35 and $42 level over the next couple weeks,” OANDA’s New York-based strategist Ed Moya said after Friday’s market close.

“The rapid demand rebound is not happening, but stimulus efforts, pauses in reopening of businesses, improved treatments for the virus are limiting the downward pressure on crude prices.”

, which are tied to around three quarters of the world’s oil trades, was off 1.7%, extending last week’s 3% drop. 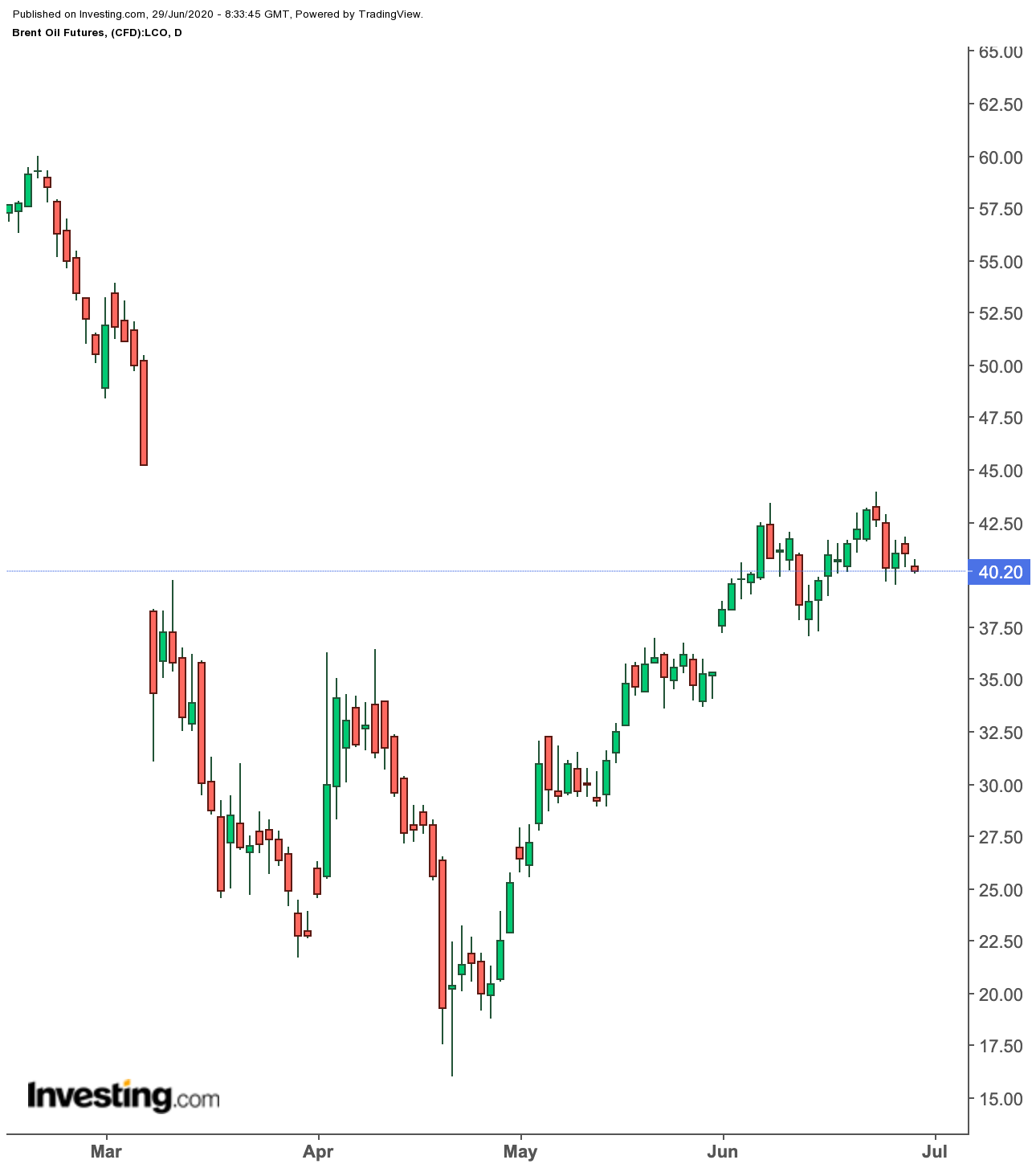 US oil and gas firms in Texas and the surrounding area don’t expect global oil consumption to return to the levels seen before the coronavirus until late next year, or later. A recent survey by the Federal Reserve Bank of Dallas found around 51% of respondents expect such a recovery by the fourth quarter by the late 2021 or later, if not at all.

More than half of executives from 160 different oil and gas firms said they had applied for at least one government assistance program, according to a survey from the Federal Reserve Bank of Dallas.

“Higher rates of working from home and fewer leisure trips this summer are likely to further hamper oil demand in the developed market,” Bethany Beckett, an economist at Oxford Economics, in a note, the Wall Street Journal reported.

New York-based Energy Intelligence suggested in an analysis that national oil companies, from Saudi Arabia’s Aramco (SE:), to Malaysia’s Petronas (KL:), were in a flux on how to react to the crisis.

“NOCs come in all shapes and sizes, but most share core DNA.”

“For their stakeholders, NOCs are viewed as central to both national wealth generation and economic sovereignty.”

COMEX gold futures held steady around $1,790 an ounce, making a strong case for a strike at the $1,800 level. Last week, gold came within just $4 of cracking the target that longs in the market have eyed for the last nine years. 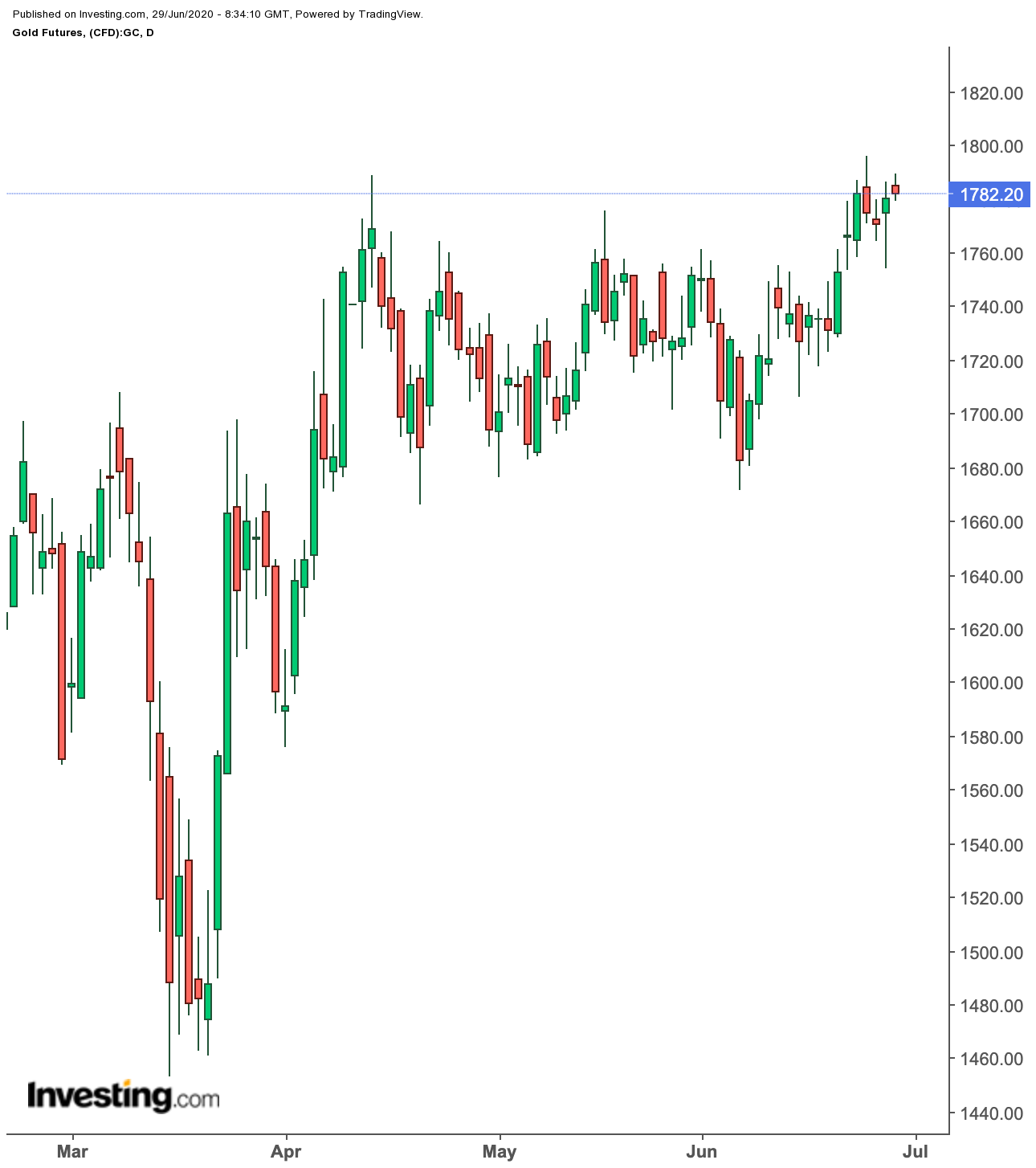 While upward momentum in gold cooled on Friday, analysts were banking on the market reprising 2011 highs before the end of next week, and possibly record highs above $1,900 later in July.

“Investors are getting nervous due to the current rise in coronavirus cases and quitting their positions in riskier assets like stocks, while parking their investments in gold and bonds.”

As The World Recovers From Coronavirus, Will The U.S. Be A Leader Or A Laggard?

Copper May Not Hit $3 Jackpot Despite Supply Crunch

Communiqués by the ERM II parties on Bulgaria and Croatia