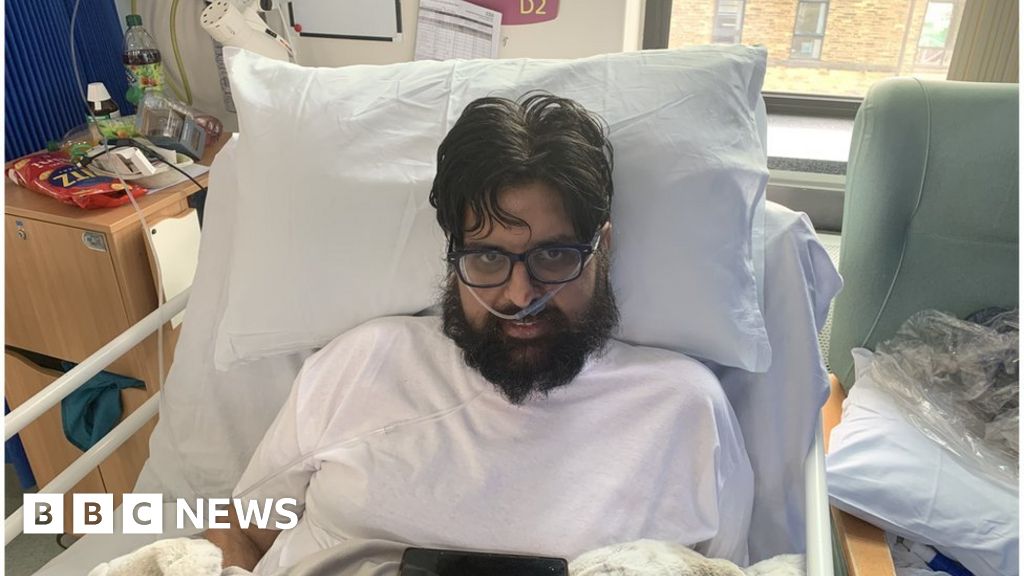 When Mohammed Azeem arrived in Bradford Royal Infirmary he was in critical state, with far too little oxygen in his blood – at one point his oxygen levels were “not compatible with life” according to the intensive care specialist treating him. But incredibly he survived, writes Dr John Wright.

Mohammed’s story is a miraculous one. This 35-year-old taxi driver loved working out and lifting weights and never thought he would be at risk from the brutal effects of Covid-19.

Once his breathing problems began, he was reluctant to call the NHS for help, because of the myth then circulating in parts of the Asian community that people admitted to hospital were never discharged alive. It was his friend, Haleem, who insisted on calling an ambulance and even helped to carry him into it, as by this stage he was unable to walk.

When Mohammed arrived in A&E it was clear that his life was in immediate danger. This was a young man who was dying in front of us and he was whisked straight to the Intensive Care Unit. It was touch and go from his first day and his perilous journey was only just beginning. He ended up in a coma in ICU for 48 days, and in hospital for 68.

The doctor treating him throughout was ICU consultant Dr Michael McCooe, who describes him as the sickest young man he has ever seen.

A healthy person has blood oxygen saturation levels of 95% or higher – in other words their red blood cells are carrying almost as much oxygen as possible (100%). Mohammed’s saturation levels were 60% to 70%, and that was after ventilation with undiluted oxygen. Even when he was intubated in ICU it was a struggle to keep his oxygen levels above 80%, the point below which there is a risk of damage to organs such as the heart and brain.

Prof John Wright, a doctor and epidemiologist, is head of the Bradford Institute for Health Research, and a veteran of cholera, HIV and Ebola epidemics in sub-Saharan Africa. He is writing this diary for BBC News and recording from the hospital wards for BBC Radio.

In fact, over the coming weeks Mohammed kept drifting away from his precious life. Several times his oxygen saturation dropped to a level that Dr McCooe describes as “incompatible with life”.

The ICU team had numerous heart-breaking conversations with his family, preparing them for the worst, but Mohammed had other ideas. Deep within his comatose body there was an ember of vitality that kept glowing. Each time it looked as though it was about to extinguished it flickered back into flame.

“We had a number of conversations with his family, almost daily conversations, where we were talking about the futility of what we were doing,” says Michael McCooe.

“We weren’t saying we were giving up on him, but we just wanted them to know that we didn’t hold up any hope that he was going to survive. And then to our utter shock and amazement – and it was a real moment of hope for lots of people who looked after him, and for people who looked after Covid patients in general – he just started to turn around.

“His blood gases got better, his oxygen requirements reduced and we were able to permanently keep him on his back.

“We then had the concern about what he’d be like when we woke him because he’d had such low oxygen levels and the brain is susceptible to that. But when we woke him he was neurologically fine. He was OK – his strength was surprisingly good for what he’d been through. Remarkably, he was able to engage with physio pretty quickly and from that point he just raced to recovery.”

So when we cheered him off the ward after 10 gruelling weeks there was great celebration and joy. As clinicians we are caring but rational scientists, so when small miracles happen it is hard not to be amazed. Covid-19 has shown each of us great pain and suffering, but also instances of remarkable resilience.

Like another Covid patient I have written about, Mohammed Hussain – who imagined that he was caught up in a terrorist incident while being treated in intensive care – Mohammed Azeem had troubling dreams while sedated, and thought he had been shot three times with a Glock pistol.

When he came round, medical staff had to give him the tragic news that his mother, who had been brought into intensive care three days after him, had died.

“I was pinching myself thinking it was a nightmare,” Mohammed says. “I rang my dad straight away and my dad told me that it was true, my mum had died. I thought this recovery will be 10 times harder now. I’ve lost everything.”

At that point he hadn’t seen his wife and three children for seven weeks, so despite grieving for his mother he had that joyful reunion to look forward to. And also the reunion with his friend, Haleem, a shopkeeper, whom he credits with saving his life, along with the staff in ICU.

The two men are close – their grandfathers shared a house when they first arrived in Bradford from Pakistan, and they have known each other all their lives – so Mohammed’s ordeal in hospital was an emotional ride for Haleem too, until he finally saw him on WhatsApp, not long before he was discharged.

“For such a big stocky man who is so strong – we call him The Beast because he’s that strong – we couldn’t believe how ill he was. It just broke my heart,” Haleem says, recalling the day his friend was taken away in the ambulance.

“That evening we got a call at 10pm to say he had an hour to live, and we were just praying for him, everyone came on to the street.

“Every other week they were saying they were taking him off the machine, that he wouldn’t survive this. But he is so strong… his body has used every bit of strength to keep him alive.”

Ramadan was difficult under lockdown, Haleem says, and Eid was very difficult. “Today seems like a green light to life resuming.”

Many Covid-19 patients continue to need care at home, once they leave hospital. The story of Mary Blessington illustrates how the path to recovery can involve U-turns.

‘A patient given hours to live who proved us wrong’

Big Companies Overhaul Discounts And Payment Terms And The Writ Rolls Down Hill Onto...

Speech by Alexis Goosdeel: Closing remarks on the impact of the COVID-19 pandemic on...

Collision of Galaxies May Have Spurred Our Solar System’s Formation