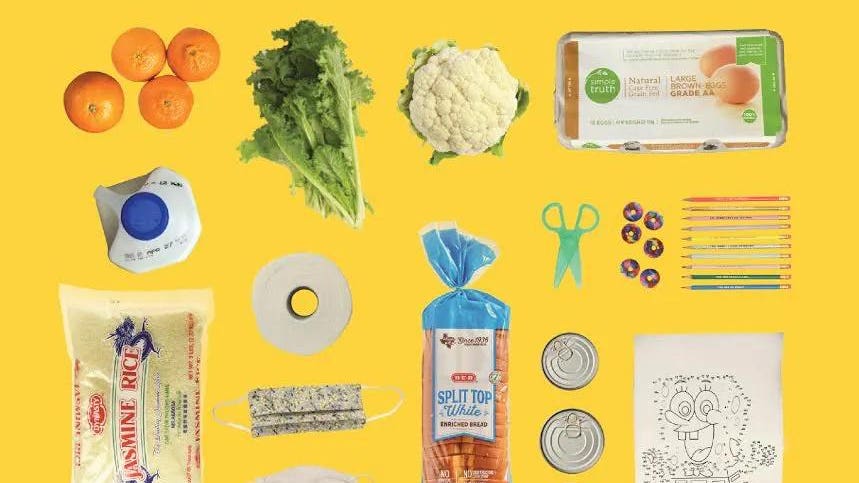 When COVID-19 struck Los Angeles, placemaking non-profit LA-Más knew they needed to act quickly to support their northeast LA neighbors. Formerly centered on design and public policy across the entire city, the 8-year-old organization had begun conversations at the beginning of 2020 with neighborhood leaders in Frogtown, also known as Elysian Valley, to start focusing its efforts on community-based planning and advocacy there. But when the coronavirus pandemic hit, “all of a sudden we had to pivot from having conversations about doing something to immediately doing something,” says architectural designer Elizabeth Timme who cofounded LA-Más with Helen Leung, a Frogtown native and Harvard Kennedy School graduate.

In March, the female-led team of seven reached out to their neighbors to find out how they could support this family-oriented, working-class community. Within a span of two weeks, in partnership with the Elysian Valley Neighborhood Watch and Jardín del Rio Community Garden led by David De La Torre, the Elysian Valley Senior Group led by Ceci Dominguez and with the help of over 150 volunteers, they developed a Northeast LA Community Response program to deliver free groceries, face masks, family activity kits, pictorially-centered information about COVID-19-related resources and (in some cases) direct cash assistance to neighbors affected, fiscally and otherwise, by the virus.

After contacting De La Torre and Dominguez, the organization learned that the two had already begun an informal phone tree to check on neighbors. LA-Más followed suit. “We got a list of the registered voters in Elysian Valley and our team of seven started making calls every day, about 20 calls a day at least,” recalls program manager Alexandra Ramirez. The team then trained their volunteers to virtually check in on neighbors, asking broad questions like, ‘Do you have everything you need including food and a face mask?’ and making more specific inquiries like, ‘Are you worried about making your rent payment?’ In total, they made more than 2,000 calls.

Partnering with local restaurant Lemon Poppy Kitchen and volunteer organization API Forward Movement to provide free groceries, the non-profit hand-delivered their care packages bi-weekly through mid-June. In the end, they officially assisted more than 800 people but Ramirez believes that the program’s reach actually went farther. “Elysian Valley and Glassell Park are close-knit communities that are not used to relying on public systems; they’ve had to build really strong support networks, especially with immigrant families,” she says. “We knew that by handing out these printed materials, they would be circulated informally among neighbors.”

Though the aid program was a new venture for LA-Más, the project management, community organization, and navigation of bureaucratic systems inherent within it are day-to-day tasks for a team of diverse personal and professional backgrounds. “What’s really interesting is how transferable the skills learned working on our backyard homes project were to understanding the local, statewide, and federal resources that were out there, connecting people to those resources and understanding where there were gaps,” says Timme referencing the accessory dwelling units program the non-profit spearheads throughout Los Angeles county. “It was really fascinating how we could pivot so quickly to a very different scale and type of need.”

Now, LA-Más is considering next steps. With COVID-19 cases on the rise in California, the Northeast LA Community Response program may be reinstated. But, the team does acknowledge that mutual aid is just the tip of the iceberg in the fight for community equity. Working-class communities will continue to struggle during the health crisis, and for months after, due to intrinsic systemic issues. “We are in this phase of work where we did the deep listening and met people’s immediate needs with a delivery but we really want to acknowledge that we weren’t changing people’s lives and that no problems have been solved,” urges Timme. “Going forward, the central focus of our work is going to be able to fight these kinds of injustices and fight for equal and accessible resources For us, this was us doing two things at once: meeting someone’s immediate needs but also understanding that so much more had to be done.”

EIB supports one of the largest desalination projects worldwide

image copyrightPA Mediaimage captionThe NHS Covid-19 app is set to become available to everyone in England and Wales on ThursdayA leading health charity...

Xavier Hopkins is planning a career as a professional downhill mountain biker, despite only having 10% of his sight.The 20-year-old from Reading has...

Market Outlook Ahead of the First Biden-Trump Presidential Debate

Is Now A Good Time To Start A Product Business?