As trading came to a close on the holiday-shortened week, the , and pushed higher after monthly proved more robust than expected. It was another positive milestone following the for the S&P 500 in 22 years and the strongest quarterly performance for the Dow since 1987.

Still, exuberance was tempered by the realities of COVID-19: the number of confirmed cases in the US continues to rise, currently closing in on 3 million, with spikes across the South and West. Florida and Texas reported new on Saturday with some states suspending, or even reversing reopening plans.

Good economic news nothwithstanding, the pandemic spread continues to weigh on the V-shaped recovery narrative many investors have been counting on.

Having reached the midway point of 2020, it’s worth looking back at where we’ve been—and where, perhaps, we might be headed. Equities are down 4% YTD, but unless you’ve been in a coma, you’re well aware of what a wild ride it’s been over the first six months of this year.

At the start of 2020, markets hit new all-time highs, but in March those heights were toppled by the global spread of coronavirus. Stocks rapidly tumbled into the most acute bear market plunge in history; the pandemic also fostered the sharpest recession since the 1930s.

But investor appetite for risk—fueled by unprecedented government and central bank stimulus—triggered what ended up being the fifth best quarterly advance in the postwar era.

Though we’ve been consistantly bearish on the markets, now would be an appropriate time to acknowledge how wrong we’ve been. Granted, we still can’t wrap our minds around how enthusiastically investors have been willing to risk their money during the worst global pandemic in one hundred years amid devastating economic data.

The only explanation we can come up with is the unprecedented amounts of fiscal and monetary aid being handed out globally. Whether we believe the Fed can, in fact, provide “,” what matters is that investors, it appears, have completely bought into the idea.

To be clear, we still don’t trust this rally. We see it as having been built on hopes and dreams of an alternative economy—on steroids. We never would have imagined stocks would do anything but collapse below the March lows, not to mention provide some of the best returns of all time.

Plus, some of the statistics are stunning. For stocks:

Moreover, given that investor optimism was so high when the outlook for restarting the economy was still fresh, will that perspective persist if new lockdowns or rollbacks accelerate in tandem with the rising number of COVID-19 cases?

Though the S&P 500 closed higher for the week, it was the fifth straight week of whipsaw conditions, with no two weeks of activity in the same direction. This makes reading the technicals more difficult, but here’s how we see it: 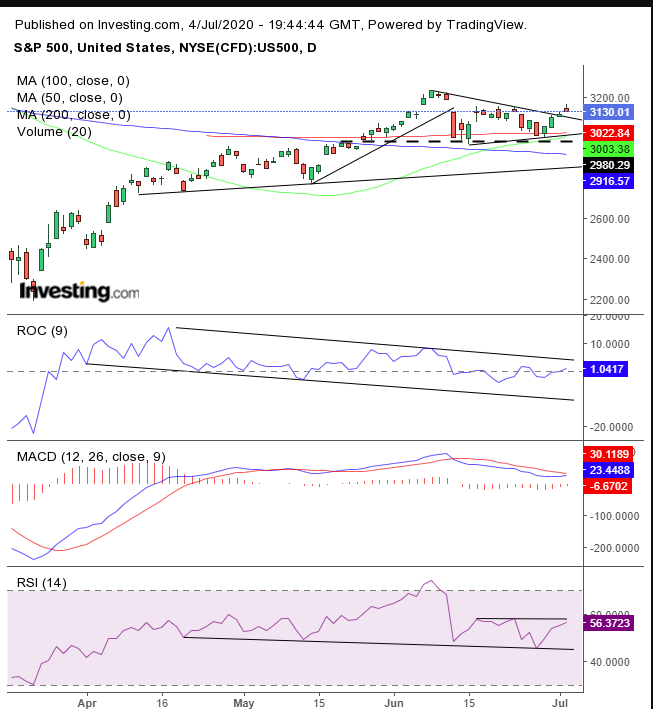 Our interpretation is that on the current daily chart, the SPX is forming a descending triangle, which may be the head of a H&S top. However, the breakouts on Wednesday and Thursday had us thinking perhaps it had been a pennant or symmetrical triangle all along.

On the other hand, the last two days of trading, albeit on light volume, produced small real bodies, with Thursday’s shooting star suggesting the breakout is weak.

All indicators seemed to support that argument. The 50 DMA lost wind and trended below the 200 DMA. The MACD’s short MA failed to cross the long MA, remaining within the bearish formation. Both momentum indicators, the ROC and the RSI, provided negative divergences to the price. The ROC was trading within a falling channel and the RSI was developing a H&S top—which is what we expected of the price.

While we may not be comfortable with the breakout, it is, still, a breakout. Therefore, we would wait to see whether it finds sufficient demand to keep it above the triangle and propel it higher, or whether it will languish back into the pattern.

The fell on Thursday. Nonetheless, it closed well above its lows. 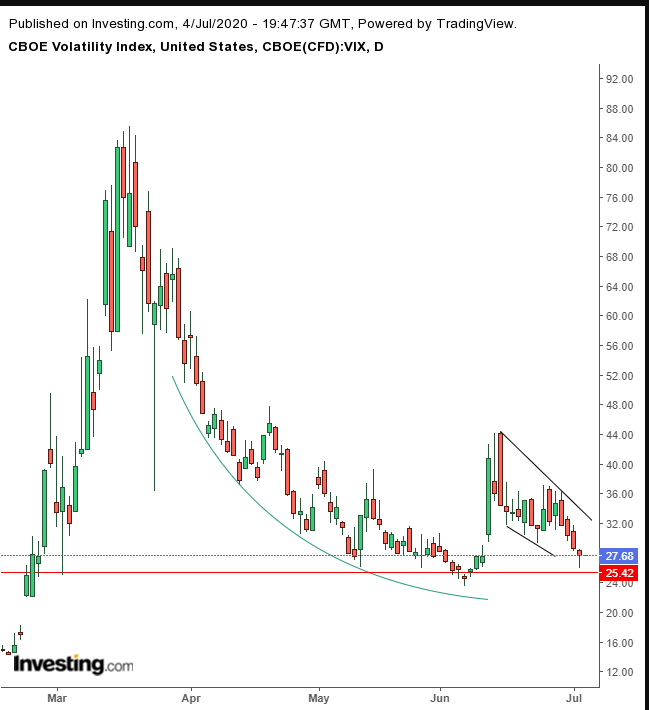 The activity produced a hammer, right above the broken resistance since May (red line), still within the falling pattern. An upside breakout would resume the rounding bottom formation (green curved line). 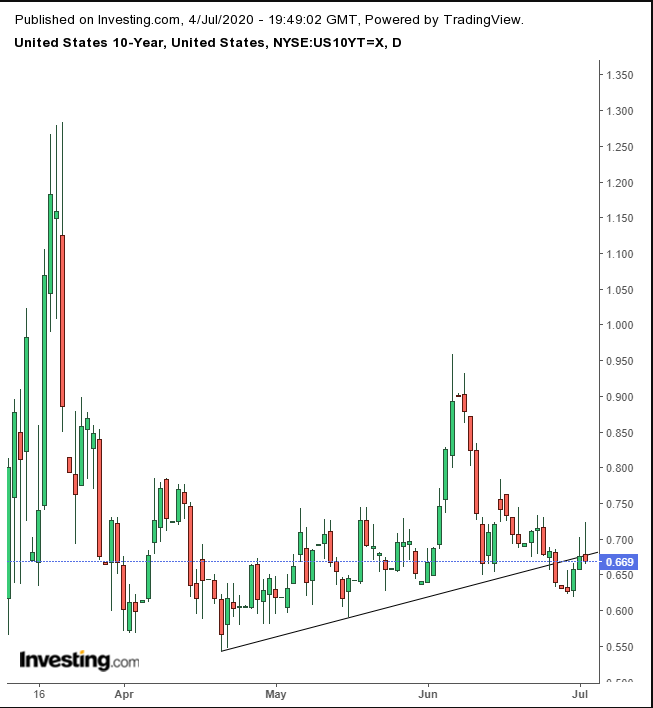 In a mirror image of the VIX, yields, including for the Treasury note, produced a shooting star with an exceptionally long upper shadow, closing for the second day below the broken uptrend line since April 21.

Thursday’s hammer for the reinforced the uptrend line that includes the June 23 low, broadening the rising flag. 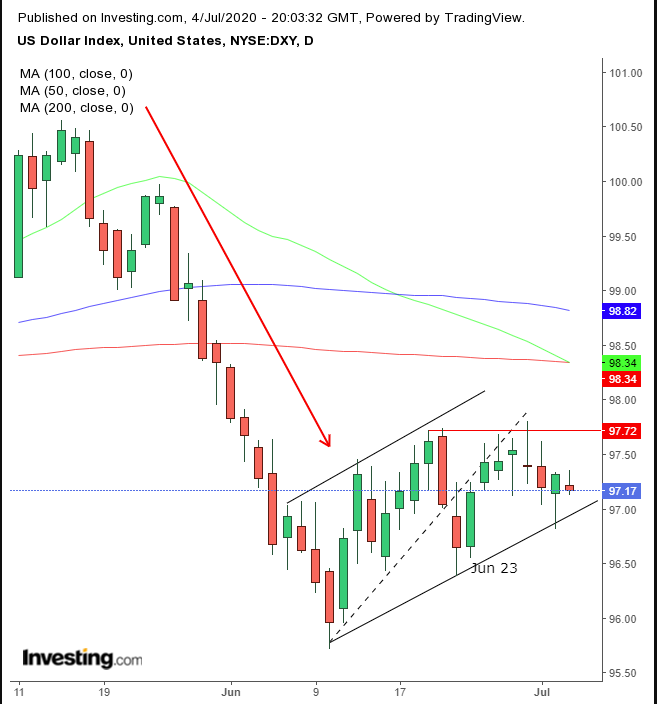 This pattern is presumed to be a pause in the trend, a time when traders cash out after the strongest declines for the USD in a year, while new bears take their place. After the contracts trade hands and the demand produced by short coverings dries up, a downside penetration would signal another leg lower.

Meanwhile, the 50 DMA is breathing down the neck of the 200 DMA, threatening a death cross. The 200 DMA is even falling, making it a much more potent bearish signal.

On the fundamental side there’s reason to be concerned as well regarding the next move for the global reserve currency. Thursday’s Nonfarm Payrolls release may have smashed expectations, but the dollar didn’t surge. It did rebound late in the session, but fell again Friday.

managed to maintain gains after a crucial upside breakout of a symmetrical triangle—including a falling flag—that followed a continuation H&S pattern. 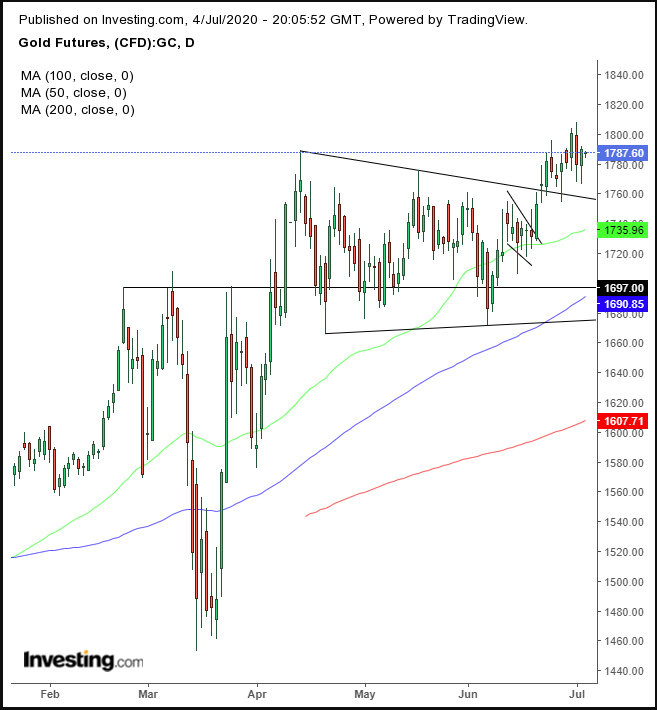 On Friday,  trimmed half of Thursday’s advance. 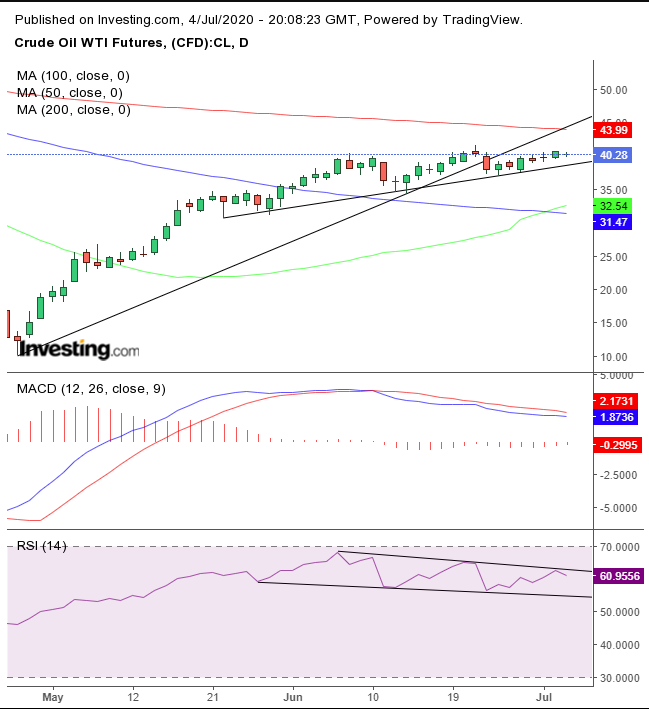 Technically, the price may be topping, after falling below the uptrend line since April 28, below the 200 DMA. Both the MACD and the RSI provided negative divergences, each falling against rising prices.

Gold And The U.S. Election: Here’s What To Look For