US futures for the , , and all jumped on Monday to start the trading week, in tandem with global stocks, as the market narrative continued to focus on signals of a robust economic recovery rather than signs of the growing number of COVID-19 cases, which are nearing 11.5 million worldwide with more than half a million deaths.

The US dollar fell, yields rose and continues to hover above $40.

After Thursday’s release showed 4.8 million new jobs had been created in the US during June, risk appetite was reinforced this morning by German data for May which, at 10.4% came in below expectations but were still way ahead of April’s abysmal -26.2%; UK for May which printed higher than anticipated, at 55.3 along with Eurozone which at 17.8% MoM, beat forecasts.

Still, German factory orders are down 29.3% from the same period a year ago and the US , at 11% remains very far from its pre-COVID 50-year low level of under 4%.

As well, the US remains a significant viral hotspot. Currently, it has the most confirmed cases in the world, with the outbreak nearing the 3 million mark and fatalities close to 113K. In addition, many health officials fear July 4 celebrations could be the catalyst for another wave of outbreaks.

As we’ve , if record spikes continue, officials are likely to tighten, not loosen, lockdown regulations. But one has to wonder if and when investors will take note of the serious nature of the ongoing coronavirus headwind.

Plus, muddling the situation are the conflicting views being expressed, between the Trump administration downplaying the contagion’s impact on the American population and the economy versus the duration of the situation and it’s longer-term effect on businesses, jobs and consumption. While US Labor Secretary Eugene Scalia commented that the economy has rebounded from COVID-19 better than anticipated, Morgan Stanley insists “the crisis is far from over,” and the economy continues to face an uphill battle. Goldman analysts quantified that battle, lowering their US forecast to a 4.6% contraction this year.

On Monday, European stocks followed Asian markets higher. The Index was up 1.7%. 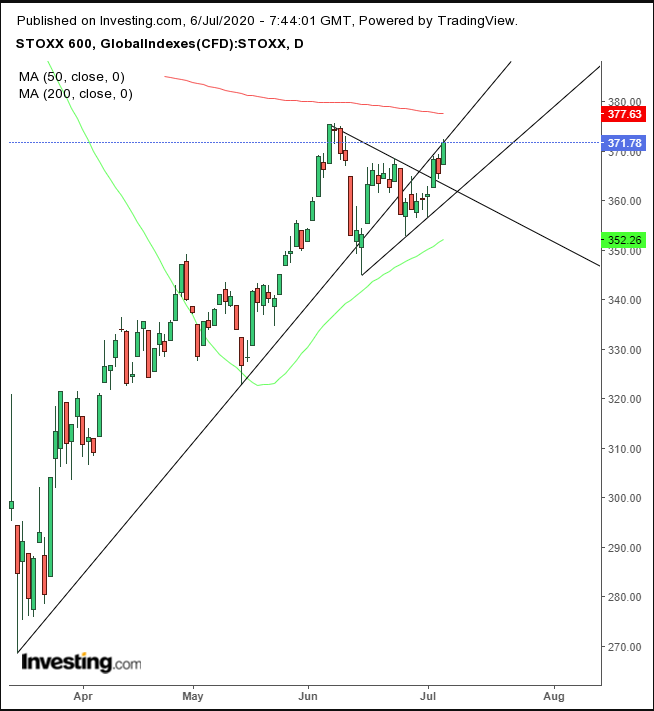 The index is extending the upside breakout of a symmetrical triangle, and straining to climb back above its broken uptrend line since the March lows.

During the Asian session, most regional indices soared, led by China’s , (+5.7%), which saw its biggest one-day jump since 2015.

The move came following a front page editorial in The China Securities Journal said that a “healthy” bull market after coronavirus is now more important than ever to support the country’s rapidly developing digital economy. Chinese social networks exploded after publication with searches for “how to open a stock account.” Clearly, the public interpreted the article as government support of financial securities.

Australia’s was the only regional market in the red, (-0.7%), after four straight sessions of gains. The rising cases of coronavirus in the land down under saw the reimposition of restrictions, fueling investor fears of another slowdown.

Before the US Independence Day holiday, stocks on Wall Street ended the week higher. It was the fifth consecutive week of heightened volatility, with prices whipsawing on a daily basis. It was also the close of the in many years, just one quarter after one of the equity market’s worst performances. After such deeply contrasting quarters, and with COVID-19 still very much in evidence there’s one unanswerable question that should be asked: is the recent, sharp growth simply a natural reaction to the worst recession since the 1930s or will it turn out to be sustainable?

Yields, including for the Treasury, managed to cross back above the uptrend line since April 20…at least for now. 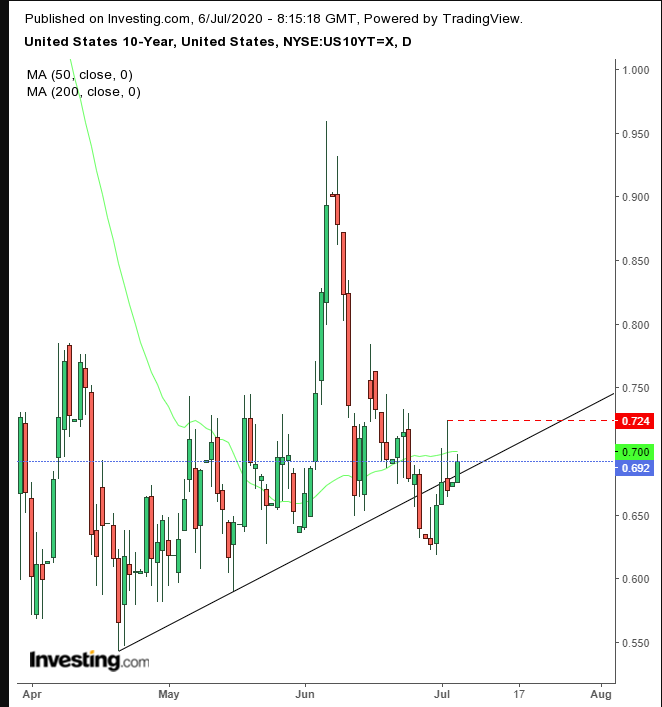 Rates still have to overcome the presumed resistance of Thursday’s shooting star, which has an exceptionally bearish upper shadow. This could be the making of a rising flag, bearish after the preceding drop.

The fell for a second day, just crossing below the bottom of a rising flag, bearish after the worst selloff in a long time. 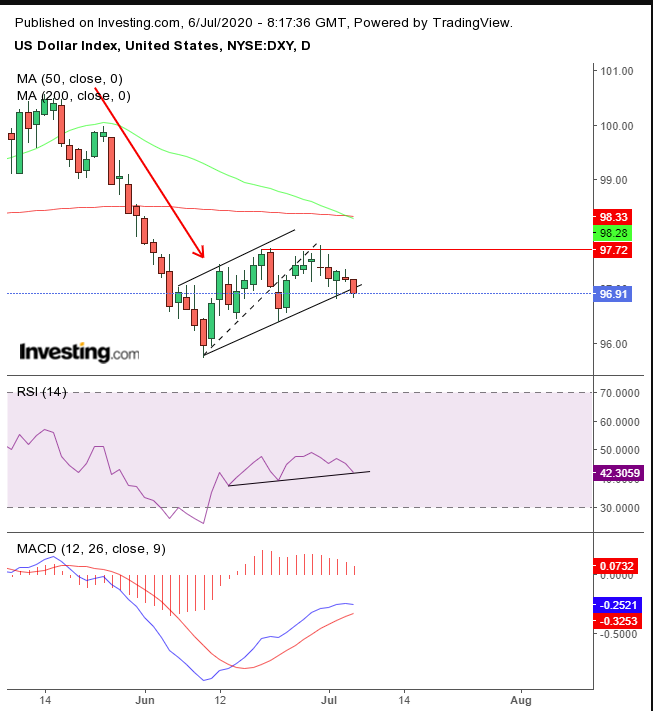 The RSI is about to top-out, and the MACD’s long-term MA is slowing down, increasing the odds of it falling below the long-term MA.

bulls are showing signs of fatigue. 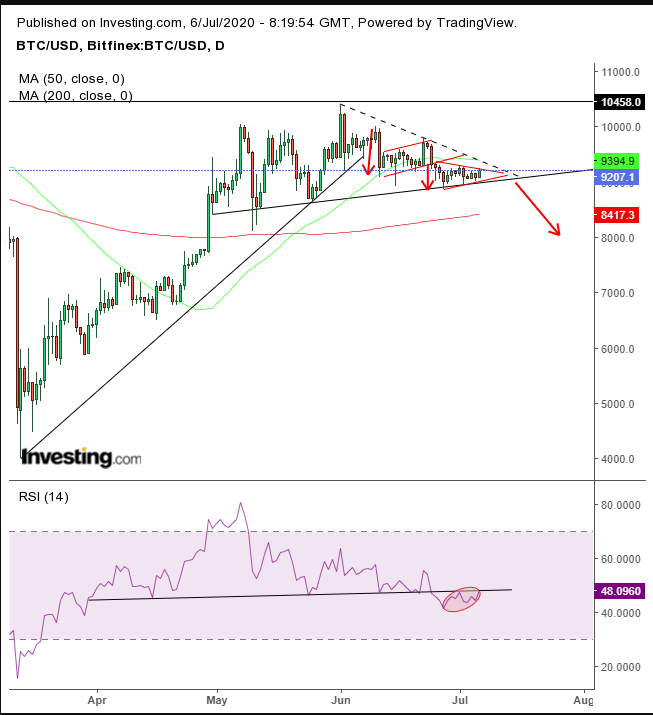 The digital currency developed back-to-back small bearish patterns, increasing the scenario for a H&S top to complete, which means the cryptocurrency looks to be topping out, as the RSI has already done.

OPEC cut production to the lowest levels since 1991 as demand evaporates amid the global pandemic, pushing oil prices back above $40. They were nearing the $41 level at time of writing. 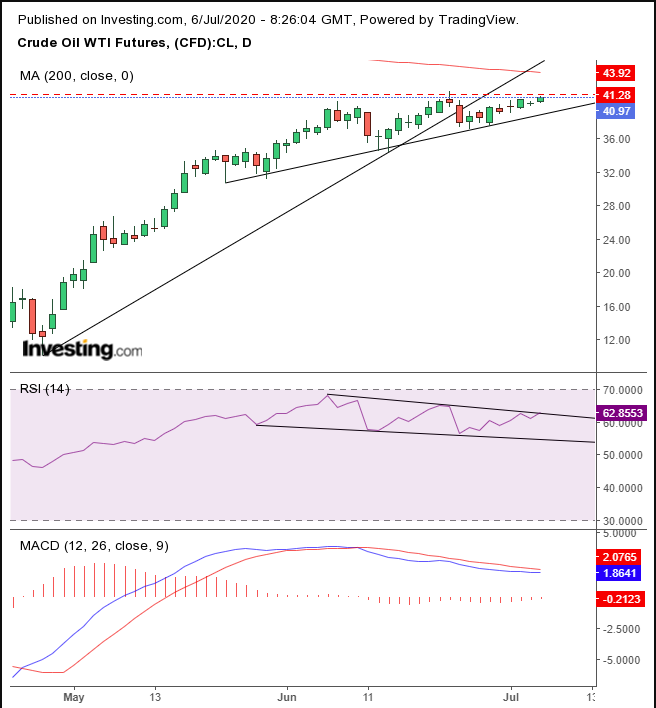 The price of WTI is at its highest since March 6, before a quarter of the commodity’s value was erased in a single day amid a falling gap, which has been proven a resistance level (dotted red line) stopping the June 8 and June 23 highs.

The 200 DMA has been falling toward the same resistance and both the RSI and MACD have been providing negative divergences.

Monetary policy decisions from and central banks are are due on Tuesday.

The EIA report is released on Wednesday.

All eyes will be on the U.S. weekly report on Thursday.

Action Points – Bringing U.K. Business Together In Pursuit Of An Entrepreneur-Led Recovery

Coronavirus Tanked the Economy. Then Credit Scores Went Up.

Housing Starts Slid to Lowest Level Since 2015 in April as...