Home Investments Boeing Shares Are Showing Some Strength, But Is It A Long-Term Buy...

Shares of beaten-down aviation giant Boeing (NYSE:) have recently been showing some signs of life. After plunging below $100 in mid-March, the stock of the world’s largest planemaker has risen by 50% during the past three months. It closed yesterday at $187.91, up almost 4% during the New York session. 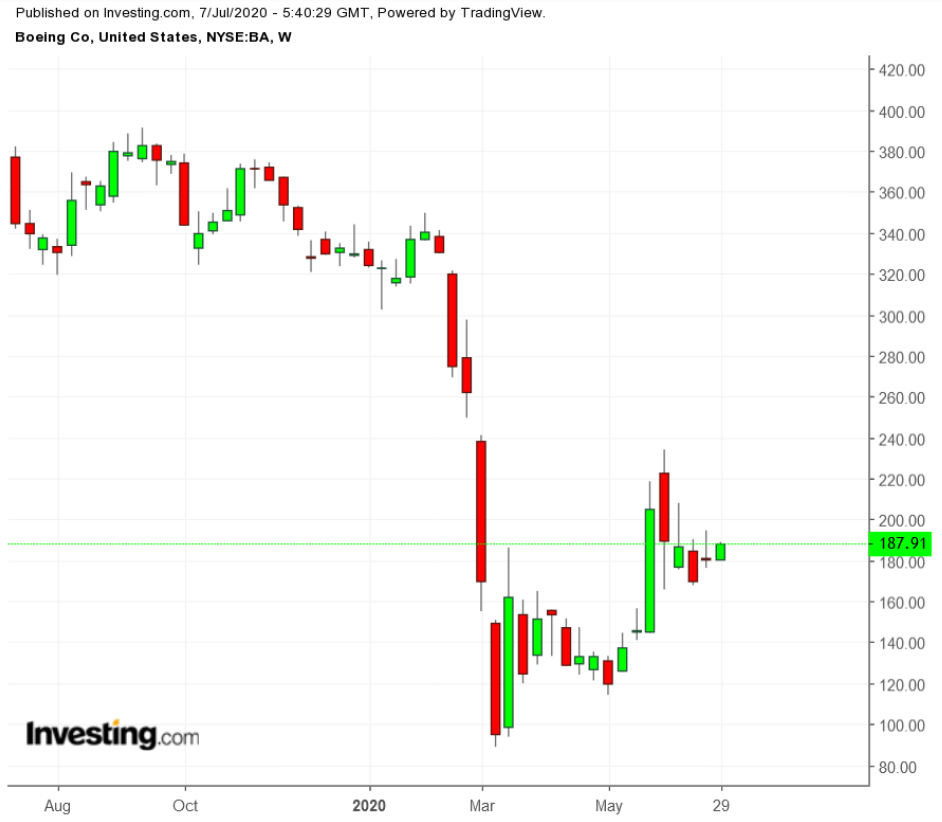 Does this rebound suggest that the worst is over for this Chicago-based plane manufacturer? Would this then be the right time to bet on the company which was once a market darling?

To be honest, given the myriad of issues Boeing is currently confronting, our answer, at this point, is based more on educated guesswork than an informed investment decision. But there are enough signals available to work through the possibilities.

First, it’s prudent to note what could possibly undermine Boeing’s revival plan this year, in the wake of its market cap being cut by more than half since February, 2019. The biggest risk remains the raging pandemic, which continues to hobble the resumption of normal air travel.

A scenario in which the world fails to find a cure or treatment for the deadly coronavirus could force many airlines into bankruptcy, causing them to default on any commitment to purchase Boeing aircraft. As things stand now, it’s expected that airlines won’t return to profit until 2022 at the earliest, according to estimates from the International Air Transport Association.

Despite the recent uptick in travelers returning to the skies, the number of people passing through US airports has been around 80% lower than for the same time last year, according to federal data.

Boeing has been hard-hit by the collapse in air travel, with a net minus 615 orders for its grounded 737 MAX jet this year as a result of cancellations. The company is more focused on wide-body models used on international routes, a segment that’s expected to take even longer to recover.

But planemakers don’t operate on month-to-month commissions. Their orderbook is usually stretched over many years. Boeing’s outstanding orders, despite the cancellation, still stand at almost 4,800—representing about 6 years of production.

“The litmus test will come next year, when airlines can properly evaluate whether to cancel longer-term deliveries for which they have prepaid less,” according to a recent report in the Wall Street Journal. “The biggest threat to backlogs was mass airline bankruptcies, though, which governments have averted with state aid.”

Boeing can regain some of its lost luster if the company is able to finesse the clearance of its grounded flagship 737 MAX back to operation after two deadly crashes in 2019. The latest news on this front is finally showing some positive movements.

“During three days of testing this week, FAA pilots and engineers evaluated Boeing’s proposed changes in connection with the automated flight control system on the aircraft,” the agency said in the statement.

But nothing is guaranteed. Additional operational readiness reviews are scheduled for this week as well. According to a report in Bloomberg, there are many steps to be completed before Boeing gets the green light for the jet to once again carry passengers. According to the report:

“[The] FAA, along with its counterparts in other nations, must approve new pilot training standards. An outside panel of aviation experts is reviewing the fixes to the plane. And FAA has to publish new regulations mandating various changes to software, wiring and other systems.”

Even if the MAX jetliner gets all the approvals needed to fly again, its contribution to Boeing’s is very much dependent upon the airline industry’s ability to resume normal operations after the pandemic. The if and when remains very much an open question right now.

Indeed, Boeing’s stock has burned many investors during the past one year, after it appeared that the company was back on the road to recovery—only to be hit by additional negative surprises.

As such, analysts on the Street are divided about the future of the aviation giant. Of 25 analysts covering the stock, 14 have given it a buying rating, while 11 are recommending to sell. The average 12-month price target for Boeing shares is around $174.

Boeing stock seems to be firming after a massive plunge this spring. That stability likely reflects signs of air traffic recovery and the company’s access to liquidity.

Given current positive developments, it’s also clear that Boeing is on the long road to recovery, though the turnaround won’t be quick. Perhaps then, waiting on the sidelines is still the best strategy.

With A Democrat In The White House, These ETFs Are Set To Charge Higher

Australian Dollar May Fall After Nasdaq Composite Tumbled into Close

How A Toothbrush Could Help Solve Our Ocean Plastic Crisis