Pity the poor UK, you might think. The future of the country after Brexit, the outlook for London as a financial center, the welfare of the country under its erratic, wild-haired prime minister—all are murky. Who would buy a bond from a country with such an uncertain future? 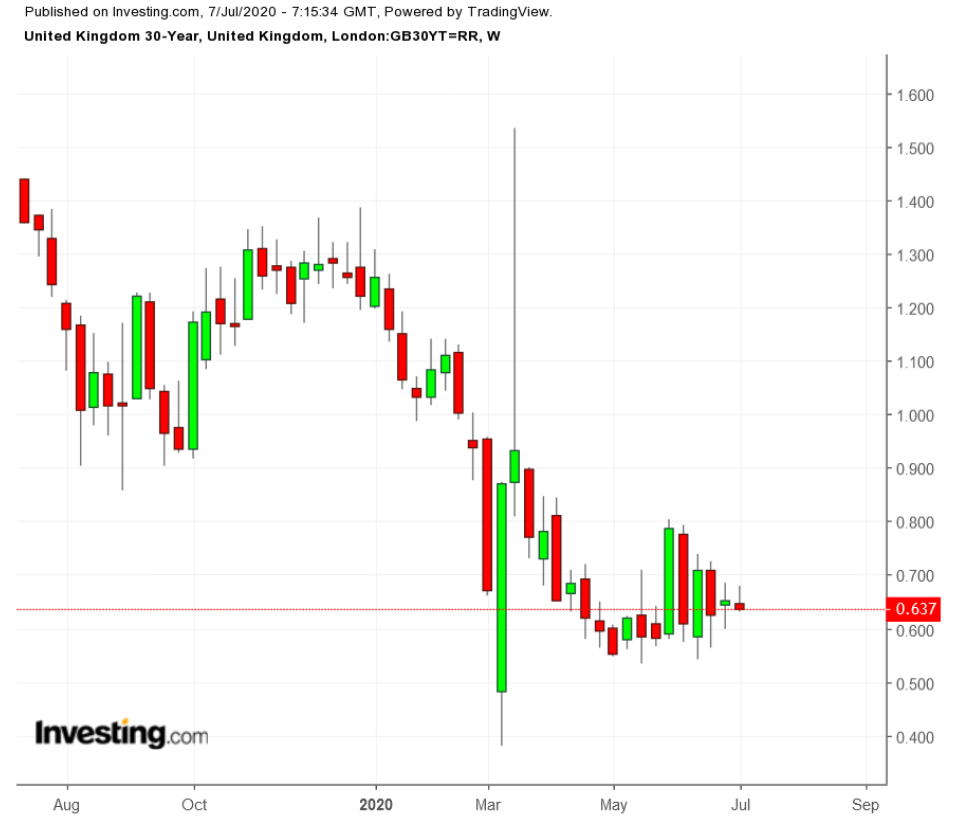 A lot of people, it seems. The yield on the super-long UK government bond has declined below that of the similar-maturity , and the gap has widened to more than 25 basis points as yields on 30-year gilts, as UK government bonds are known, has fallen to about 0.6%, compared with near 3% a year ago.

No wonder, analysts say, the Bank of England is toying with the idea of negative interest rates, which should support bond prices (prices move inversely with yields). But the Bank of Japan has had a benchmark short-term rate at a negative 0.1% since 2016.

And yes, the Bank of England has pledged during the COVID-19 pandemic to buy an additional £300 million in government bonds after adding £100 million two and a half weeks ago (though it said it would slow the rate of purchases). But the Bank of Japan has been buying government bonds for years and now owns about half the JGBs in circulation.

All this as the supply of gilts is rapidly growing because the UK government, like governments everywhere, is running up a huge deficit to cope with the coronavirus crisis. Nonetheless, investors are buying up the bonds, pushing the price up and yields down on everything from notes to 30-year bonds.

This recent move has caught many traders flatfooted, as investors started to put safety ahead of yield when faced with the prospect of a renewed lockdown. Yields on two- and gilts actually fell lower than those on other safe haven bonds like Germany’s Bunds and US Treasuries, to the point where those who were selling gilts short were forced to unwind their positions.

For all the hullaballoo over Brexit, the UK had been one of the world’s top economies long before it joined the European Union and almost certainly will be long after it has left. The is one of the world’s oldest currencies, the Bank of England one of the oldest and most highly regarded central banks, and London has been a global financial center not just for decades, but for centuries. The UK, in short, is a poster child for stability.

Not all of the recent change in investor sentiment is positive, however. The BOE’s benchmark rate going negative would be a sign of concern about the economy, but nonetheless a boost for the current bond rally.

As uncertainty over COVID-19 ebbs and flows, government bonds in general have been trading actively. Average daily turnover of UK government bonds reached a record high of £47 billion in the first quarter, according to the Association for Financial Markets in Europe, a bank lobby group. For Europe as a whole, trading in sovereigns rose 25% on a daily average, quarter-on-quarter.

COVID-19 worries have depressed UK equities, as firms cut dividends and economic recovery is a question mark. As a result, gilts were among the best performing assets in the first half, returning about 10%, according to the Financial Times. Inflation-indexed gilts did even better, returning 13.7%.

UK government bonds get their name because, once upon a time, they were literally gilt-edged. Now, in spite of all the challenges facing the UK, gilts in the time of COVID-19 are something of a silver lining for investors.

Chart Of The Day: As Gold Goes Parabolic, Bitcoin Could Be A Better Safe Haven

Chart Of The Day: As Gold Goes Parabolic, Bitcoin Could Be A Better Safe Haven

Sickle cell disease: I wanted to get people talking

As a B Corp, Athleta prioritizes all...

Press Release: How sustainable is the use of water in EU...

Declaration by the High Representative on behalf of the EU on...