Home Entrepreneurs Fashion With The Future In Mind 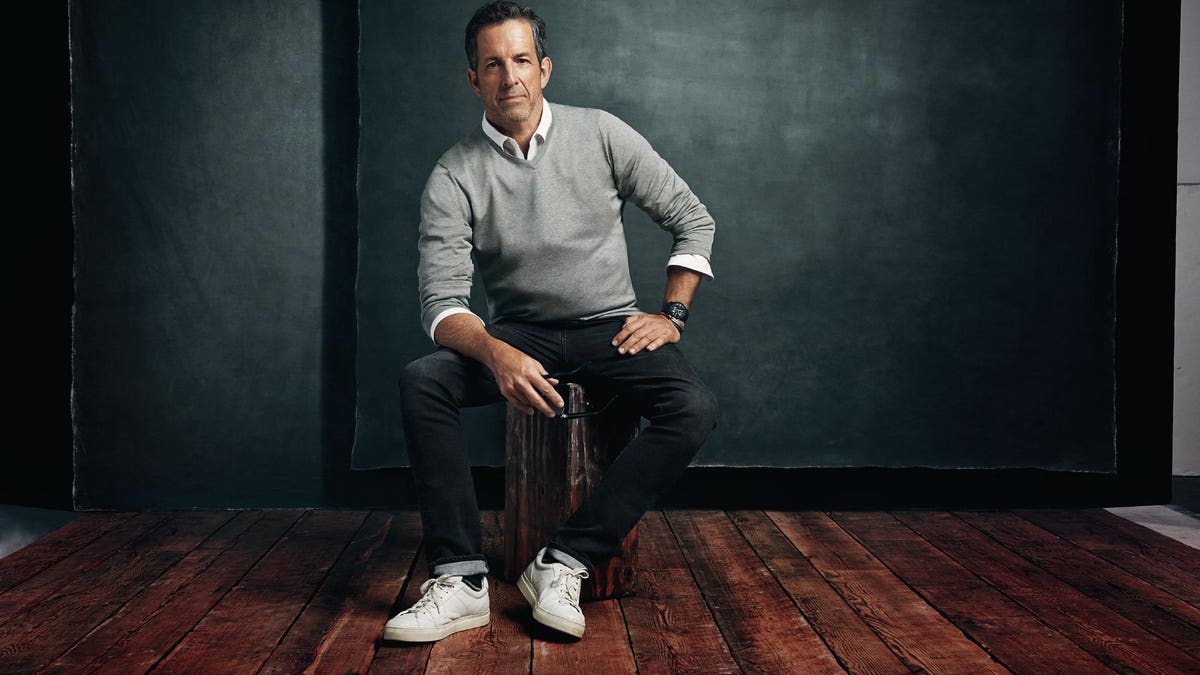 Kenneth Cole is renowned for turning his original shoe designing passion into an empire of activism since the early 1980’s. From destigmatizing HIV/AIDS to advocating for the LGBTQ+ community and gun reform, Cole has pushed the envelope and forced consumers to think past stigmas and toward community. Now, Cole and a band of intentional influencers (like Kendall Jenner, Deepak Chopra, Whoopi Goldberg, Michael Strahan) have introduced his next ambitious project for society: the Mental Health Coalition. It begins with a simple question, #HowAreYouReally?

Brendan Doherty: Welcome back to Icons of Impact with Kenneth Cole, a man of many hats: businessman, fashion designer, philanthropist, relentless activist — throughout your career you’ve addressed many core social issues. In today’s world, it’s very fashionable to design a business that has “impact” or to talk about it as part of your brand. We see that with the Black Lives Matter movement right now, with many brands called out as coming too late. Yet you’ve had your business tackle social challenges since the start, even when doing so may have been risky to the business. Tell me what’s behind that?

Kenneth Cole: Thank you, brother. Appreciate the introduction. So much of what I’ve done over the years is I’ve looked to connect with people in meaningful ways, and that often means pushing societal boundaries. Fashion is essentially about connecting people — not just with what’s on their body but also what’s on their mind. It’s not just what they stand in — it’s what they stand for. By meeting people there, it’s more meaningful and so much more sustainable. I’ve also always had a passion for what’s happening in the world. It makes what I do so much more meaningful for myself, my associates, but also for our clients.

Doherty: Throughout your career, was there ever a “leap moment,” where your team felt an issue was too risky, that you needed to play it safer, but as a leader you decided to push forward?

Cole: I started talking about HIV/AIDS in the 80s when nobody would or could, and the stigma was so devastating. And if you spoke about it, you were presumed to be at-risk — and all the at-risk communities were stigmatized. The 80s saw this renewal of activism for initiatives like Hands Across America, Live Aid, World Aid — all about hunger in Africa. Yet there was a dark cloud looming over us at home and no one talked about it. Even the President of the United States didn’t mention HIV publicly until 40,000 people had already died. So I did a campaign on HIV infections and I stayed involved for 30 years; I became Chairman of amfAR in 2004. I believe we made a meaningful impact on millions of people’s lives and focused on scientific research in addition to addressing the stigma.

Doherty: One of the things I’ve noticed about your campaigns is that even though they’re about weighty issues, you add in some humor or cheekiness. For example, the one on sensible gun reform was about the right to bare feet. How does humor help make these issues accessible?

Cole: I think it makes it easier for people to relate and put their guard down. Sometimes comedians and late night television hosts are the greatest source of news and have an easier time connecting to people. I believe that we have to take what’s happening in the world seriously, but not much else. I don’t take what I do that seriously — I don’t think everyone in the world needs another pair of shoes, or not what we sell anyway. Plus, people have lots of choices thanks to the internet, so if I can just be considered that’s incredible.

Doherty: That  humility is very attuned to the customer, and that’s at least one of the reasons why your brand works. I want to switch gears – you recently announced the Mental Health Coalition. Why this initiative and why now?

Cole: We were talking about mental health within our company. It’s systematically the largest form of dilution in the workplace and it leads to a lack of productivity. So from a business standpoint, it gets one’s attention. And then one looks at the humanity and I came to learn that one in four people in the world today live with mental health conditions. I could make the argument that it’s actually 4 out of 4, because even if it isn’t you, it’s somebody you love. My thought is similar to what I used to say about HIV — even if you’re not infected, you’re still affected. The stigma around mental health today is as bad as it was for HIV 20 years ago.

The challenge is that it means ultimately changing culture. I spoke to several professional psychiatrists and physicians and I asked for definitions of Depression, and every person gave me different answers. It seemed so disabling to have no clear definition. I’m not a psychiatrist or public health person, but I’m in the branding business. I figured that I needed to get people to circle the wagons somehow. So we systematically spoke to every major mental health organization in this country— from suicide prevention to crisis text line  to Mental Health America to the Check-In Foundation to Child Mind Institute. So now we’ve formed this coalition with the goal of destigmatizing mental health conditions.

Doherty: So the first campaign you launched was the #HowAreYouReally challenge?

Cole: After we built the Coalition, I spoke to people at Pentagram, and they offered to do the campaign for the #HowAreYouReally Challenge pro bono.

Doherty: The timing is fantastic, given that the mental health piece of COVID can be so hidden.

Cole: Well, it’s something we’ve been contemplating for a while. My daughter Amanda pushed and inspired the notion of mental health, and then my daughter Katie took the initiative to build our platform. It  is a storytelling platform built to address the single most asked question in every language around the world, and the one most rarely ever answered fully: how are you, or in this case, how are you really? It’s very powerful. So we formed this platform with a lot of celebrities and influencers with the plan to launch in November. Then, along comes COVID. I read a study after SARS that noted that a third of people who were quarantined developed symptoms of PTSD, while  another third developed symptoms of depression; these symptoms were lasting. That quarantine wasn’t anywhere as extensive as this one, so I am absolutely convinced that we’re going to be dealing with not just the physical virus but the mental health implications . So, we accelerated the initiative. We hope that people will engage with it over time and get more comfortable talking about their mental health because you need both physical and mental health  to be well.

Doherty: What do you think is the biggest piece that helps pierce that stigmatization of this issue, based on your experience with the HIV crisis?

Cole:  Making it personal, relevant, and relatable to everybody. We engaged the influencer community as well as the folks on Capitol Hill. We persevered. You just have to continue to put yourself out there and that’s what we’re looking to do with the Coalition. We’ve been embraced by all these organizations with extraordinary resources which allows individuals out there to address their circumstances in an easier way.

Doherty: How do you frame leadership in these large scale moments of change?

Cole: I think it’s “do as I do not as I say “- my story was the first one on the website. It was hard for me to put myself out there, but I was a very attentive observer of people’s issues. I just urge leaders to do that.

Doherty: How does vulnerability factor for you day-to-day?

Cole: I think allowing yourself to be vulnerable is an extraordinary strength of character; it’s very powerful to see things from a different perspective. I think we’re going to come through this moment stronger. Right now, everybody’s focused on this “new normal,” but I’m trying to anticipate the next normal because that’s what we’ll need to embrace.

Doherty: You’ve been courageous in quite a few of these movements over your career, sometimes risking becoming a pariah within your own community. I think it’s very powerful that you continue to live that legacy, that you passed it to Amanda and Katie as well. Thank you for standing in that position.

Cole: It’s a privilege to do it, to have a voice and ability to connect with people and affect not just their wardrobes but also their lives . A big part of what I do has been inspired by my wife, Maria. You know, the pervasive problem of homelessness came to the fore in the 70s and 80s with the withdrawal of the social safety net during Reagan-Bush years. I joined an organization started by our now governor, my brother-in-law, Andrew Cuomo, called Help USA. My wife Maria took it over about 20-something years ago. They provide services in temporary housing for homeless populations across the country. So we did a campaign because this was a population nobody embraced — they didn’t vote, so politicians ignored them — they didn’t consume, so businesses ignored them.  The campaign focused on how many people would love to be in your shoes, so we asked that people bring in a pair of shoes that they didn’t wear in exchange for a discount on a new pair. We found a way to bring customers to the stores at a time when they weren’t ordinarily out in stores. And at the same time, address the needs in the community. It’s about marrying these worlds.

Doherty: That’s the sweet spot. Entrepreneurs who do campaigns that serve others, solve an issue in your backyard — and from a business perspective, it’s also resilient, sustainable, and built for longevity. Then the initiative works with economic forces. You’re a master  practitioner of balancing those things. I’d love to send folks in need over to the Mental Health Coalition.

Cole: Great, we’d love for everyone to engage with the content, the storytelling, tell your story, tag us, and see where it goes from there.

Doherty: Thanks so much, Kenneth, and best wishes with your newest impact effort.

New-Home Sales Plummeted. What Does This Mean for the Future?

A material that mimics human skin in strength, stretchability, and sensitivity could be used to collect biological data in real-time. Electronic skin, or...