The global equity rally in stocks faltered on Tuesday, after a robust open to the trading week extended risk appetite after the for US equities in decades. This morning, however, US futures for the , , and were down, and European stocks erased Monday’s gains. Asian shares were primarily in the red as well, though the eked out a gain.

The rebounded, even as yields dropped. wiped out Monday’s increases.

Contracts on all four major US indices were lower, with futures for the Russell 2000 underperforming at time of writing, (-1.4%). Contracts on the NASDAQ weren’t quite so pressured, (-0.4%), after the underlying index posted a fresh record high during Monday’s New York session.

Perhaps, investors decided to lock in profits today. As well, the US’s top, infectious disease authority, Dr. Anthony Fauci, warned yesterday that the nation is “still knee deep in the first wave,” of the coronavirus as hospitalizations skyrocket across the Sun Belt, a region that includes Florida, Texas and Arizona, all states that were once Republican—and Trumpian—strongholds, something that may now be changing.

Healthcare firms and banking industry shares pulled the lower, after German disappointed, underscoring just how much of an uphill climb it is for any economy emerging from a lockdown.

Asian stocks failed to follow Monday’s strong rally on Wall Street. Hong Kong’s underperformed, (-1.5%), as investors unwound positions after a 9.5% surge in the past five sessions. Technically, the index remained above both the 200 DMA and the top of a rising channel.

South Korea’s was the region’s second worst performer, (-1.1%), snapping a three-day rally, as rising cases of COVID-19 globally increased local worries. The number of confirmed cases of the virus has swelled to over 11.6 million worldwide, with 538,539 fatalities.

China’s Shanghai index was once again the regional outlier—it outperformed, (+0.4%), as momentum from an editorial in The China Securities Journal touting stock acquisition as a ‘healthy’ way to build the country’s digital economy kept alive a surge of interest by novice investors. Though the benchmark was 2.2% higher intraday, it gave up most of that advance. Still, the gauge sealed its sixth consecutive daily climb, the longest streak since its February bottom.

On Monday, US stocks were boosted by the tech sector. The S&P 500 rallied for a fifth straight day, its longest up-move since December. 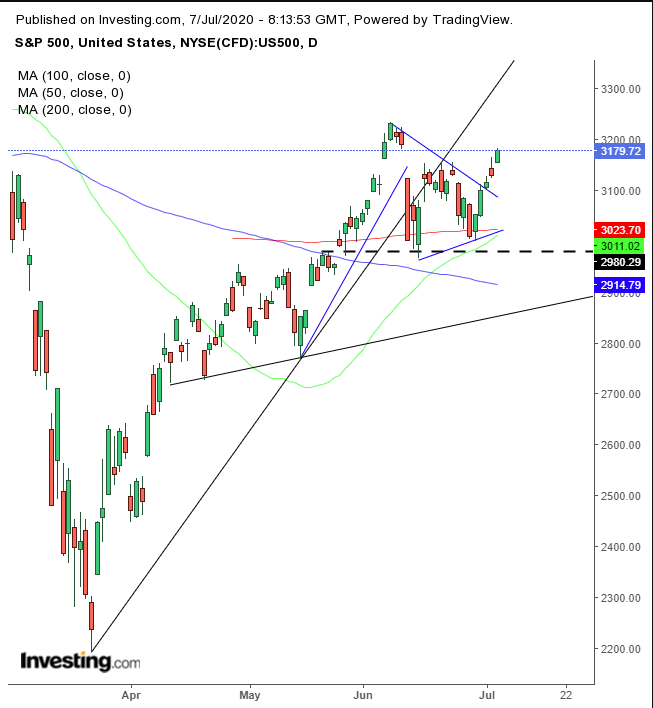 The SPX extended an upside breakout of a pennant for the third day, as the 50 DMA gets ready to make the jump above the 200 DMA, triggering a golden cross.

Amazon (NASDAQ:) made history, climbing above $3,000 per share for the first time. And Tesla (NASDAQ:) accelerated for the fifth day in a row, adding more than 40% in value over this period.

Yields, including for the US Treasury, slipped, offsetting three-and-a-half days of gains. 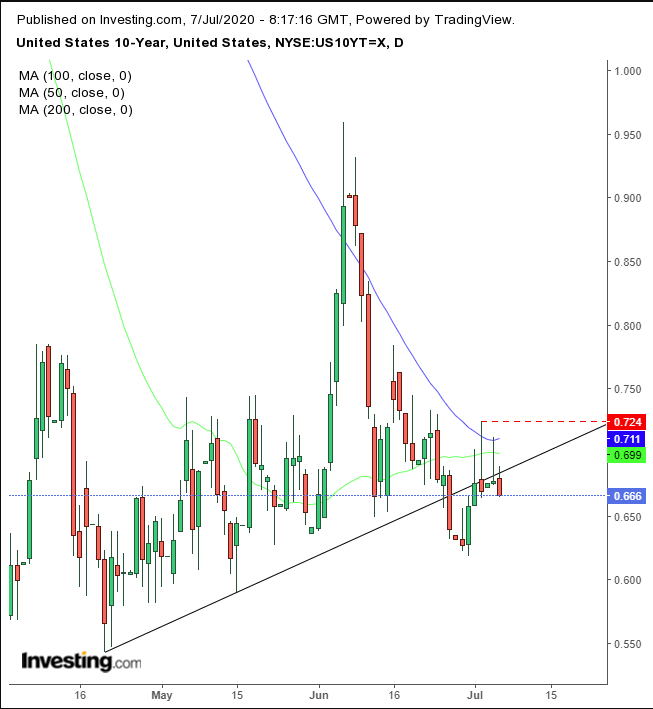 Yields fell below an uptrend since April 21, after attempting to return above it three different times.

The dollar rebounded, paring more than half of yesterday’s decline. 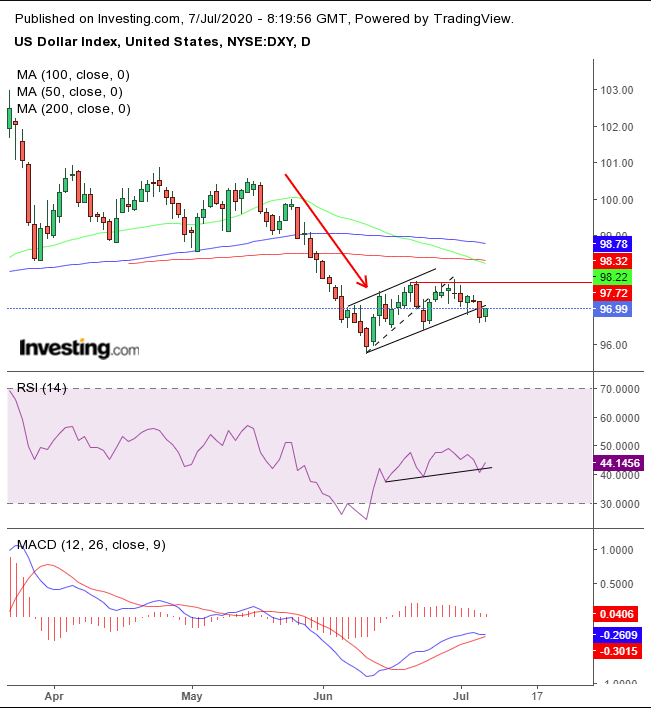 The move provided a downside breakout to a rising flag, bearish following the preceding plunge. If the price fails to climb back into the flag, it will signal a resumption of the underlying downtrend. While the 50 DMA crossed below the 200 DMA, triggering a death cross, both the RSI and the MACD held on, for now.

Dollar strength weighed on the price of . 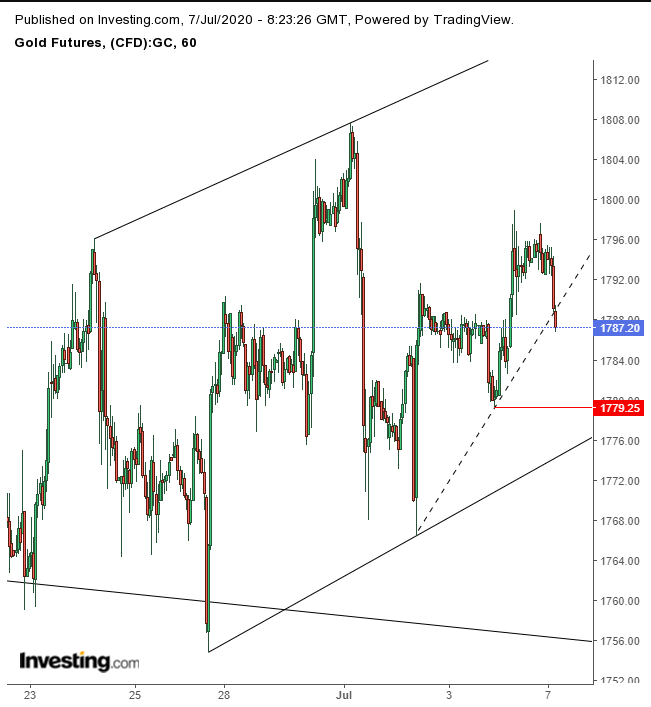 The precious metal was pushed below its hourly short-term uptrend, increasing the likelihood if the commodity retesting the bottom of its hourly rising channel, probably around where it meets with the previous hourly low at $1780.

broke the topside of a pennant, potentially the pattern. 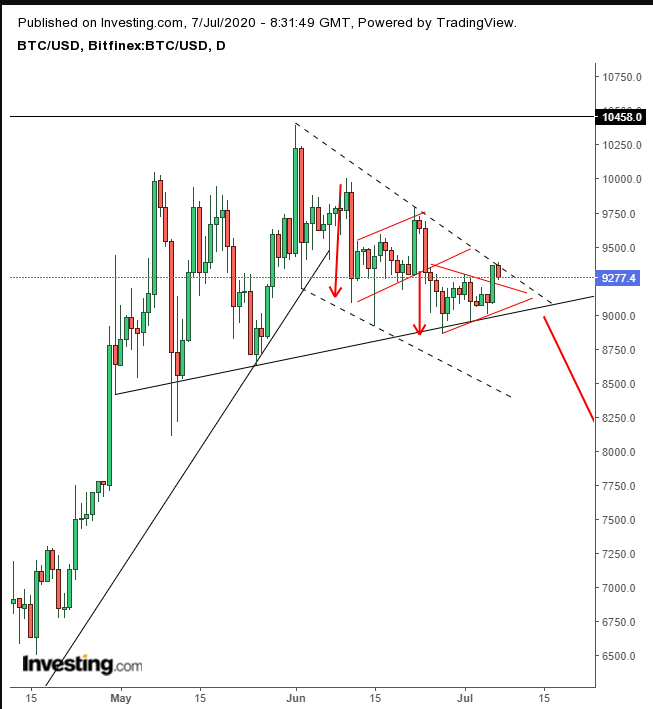 The cryptocurrency remains below the flag and within the falling channel since the June 1 high. As well, given the asset’s volatility, the breakout of 1.3% is not significant.

Oil wiped out all gains from yesterday, clinging to the $40 level ahead today’s weekly release. The data is expected to show that WTI stocks increased, even after OPEC cut output to its lowest levels since 1991 in effort to absorb the loss of demand amid the pandemic. The cuts made by Saudi Arabia the equivalent of seven supertankers from the market every day.

Perhaps the dollar is weighing on , in addition to the pressure from factors related to coronavirus. 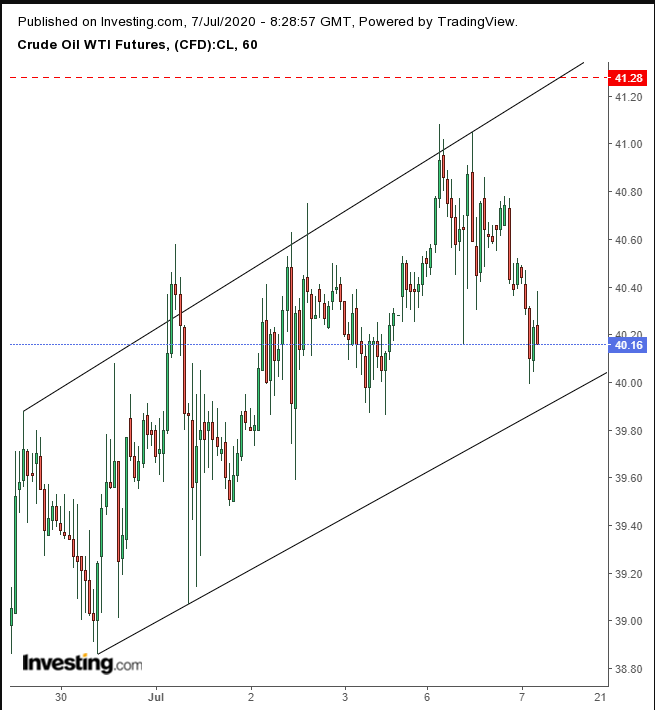 In yesterday’s analysis technical reasons that would turn WTI into a downtrend. However, for now, crude continues to trade within an hourly rising channel.

2 Cybersecurity ETFs With Growth Potential As Technology Use Accelerates

US Dollar, Yen May Rise as Markets Turn Timid After US Jobs Data

US suffers highest ever virus deaths in a single day Congress still unable to pass relief bill OPEC+ rumored to have reached production agreement ahead...

By Solomon Thimothy, founder of OneIMS, a growth agency, as well as Clickx, a digital marketing analytics platform for agencies and businesses. ...

Oil's price collapse this past spring, as the pandemic ravaged global economies, dramatically reduced the value of the . The commodity's crash—at one point...

On Wednesday the UK became the first country in the world to approve the Pfizer/BioNTech vaccine for use. Source link

How Much Higher Can AMD Stock Go?

Trump concedes pandemic to ‘get worse before it gets better’

The Top 5 Cannabis Industry Consultants You Need To Know