Home Eurozone Iberdrola receives €800 million in financing from EIB and ICO to boost... 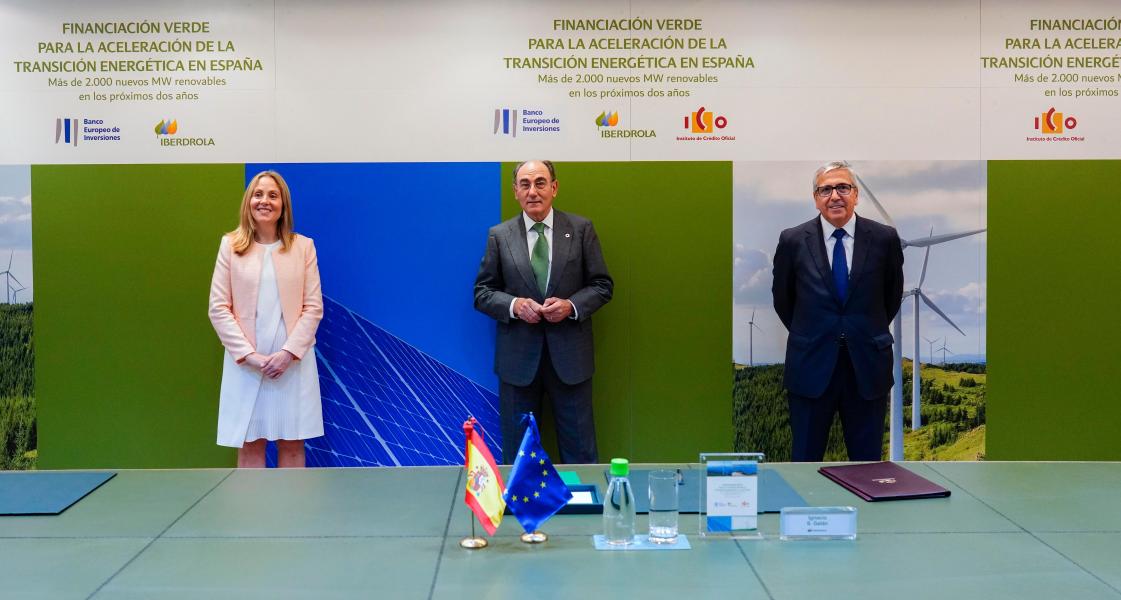 Iberdrola today signed an agreement with the European Investment Bank (EIB) and the Instituto de Crédito Oficial (ICO) to drive the green recovery by developing new renewable energy capacity in Spain. To this end, the EIB and ICO will provide €600 million and €200 million, respectively, to the Spanish energy company to finance the construction of over 20 projects with total capacity exceeding 2 000 MW. These new facilities will provide green, competitive energy equal to the average annual energy use of almost 1 million households.

The EU bank is assisting this operation via a green energy loan, the features of which are fully in line with the requirements set out in its Climate Awareness Bonds programme. As a result, it is likely to be allocated to its portfolio of loan operations financed via the issuance of these bonds.

The ICO financing is the third green loan it has granted to Iberdrola aiming to promote energy generation using renewable, non-polluting sources.

The investments made under this agreement will have a positive impact on economic and employment growth – both particularly important in light of current events – while also helping to combat climate change. The new infrastructure will make it possible to create a total of 3 000 direct jobs during the construction phase, as well as those created in other related sectors, until 2023. These come in addition to several hundred permanent positions, mostly in the rural areas where the new facilities will be located.

In concrete terms, the EIB and ICO will finance photovoltaic plants and wind farms in several different parts of Spain, most of which are in transition regions. Part of the financing originating from these loans will go towards a new solar plant in Cáceres, in the municipalities of Ceclavín and Alcántara, with installed capacity of 328 MW. Further projects have been analysed to benefit from financing under this credit line, including wind farms and solar plants in a wide range of Spanish regions. They will not only expand the generation of clean energy, both also improve Spain’s security of supply and diversify its energy mix.

EIB Vice-President Emma Navarro, responsible for the Bank’s climate action and operations in Spain, said: “We are happy to continue working with Iberdrola to support infrastructure projects that enable Spain to take advantage of its huge renewable energy potential, while contributing to economic growth and employment during this critical time. This agreement is yet another example of our commitment, as the EU climate bank, to support operations facilitating the transition to a low-carbon economy.” VP Navarro also highlighted “the dual role of green investment as a key focus for the economic recovery following the COVID-19 crisis and as a basic component of long-term growth in Europe.”

Iberdrola President Ignacio Galán indicated that “the green recovery is the perfect opportunity to generate sustainable growth and massive future employment. With the agreement we are signing today with the EIB and ICO, we are moving forward with our commitment to accelerate investment and put 3 000 MW of new capacity into service in Spain by 2022 and up to 10 000 MW by 2030. In doing this, Iberdrola will create 20 000 high quality jobs in our country. We are certain that this is the right path, supported by both the Spanish Integrated National Energy and Climate Plan (PNIEC) and the European Green Deal.”

ICO Chairman José Carlos García de Quevedo said that “the agreement reached today strengthens the EIB and ICO’s partnership to promote the development of renewable energy projects by Spanish companies like Iberdrola. Fostering green investment is a key focus for securing a sustainable recovery with a positive impact on creating and safeguarding jobs.”

The EIB is the world’s largest multilateral provider of climate finance. Its goal is to be a leader in mobilising the finance needed to limit the average global temperature increase to 1.5°C compared to preindustrial levels in order to meet the Paris Agreement objectives. On 14 November 2019, the EIB Board of Directors approved its new climate objectives and the new energy lending policy. The Bank will gradually increase its financing for climate and environmental objectives up to 50% by 2025, with the goal of ensuring that the EIB Group mobilises at least €1 trillion in the critical decade between 2021 and 2030 to promote investments helping to meet these objectives. It also announced its intention to align all EIB Group activities with the Paris Agreement. To this end, the EIB will cease financing fossil fuel-based projects from late 2021.

The EIB is the world’s largest issuer of green bonds and was the first organisation to make an issue on this market in 2007.

ICO has made sustainability a cross-cutting principle for action in all its forms: environmental, social and governance, both in borrowing operations raising funds on the international markets, and in directing it to lending operations, financing businesses and projects, as well as in its social responsibility policy.

In 2019 it launched its first, €500 million green bond issue to the marketplace and operations totalling over €1.08 billion were approved to finance environmentally and socially sustainable projects.

The Instituto de Crédito Oficial (ICO) is a corporate state-owned entity attached to the Spanish Ministry of Economic Affairs and Digital Transformation. ICO contributes to inclusive and sustainable growth, supporting economic activities meriting promotion and development as a result of their social, cultural, innovative or environmental importance.

Iberdrola, for a green recovery

Iberdrola is a global leader in the energy market, the leading supplier of wind power and one of the largest electricity companies by market capitalisation in the world. The group supplies energy to some 100 million people in dozens of countries, such as Spain, the UK (ScottishPower), the United States (AVANGRID), Brazil (Neoenergia), Mexico, Germany, Portugal, Italy and France. With a workforce of over 35 000 employees and assets exceeding €122 billion, it turned over €36.438 billion and made a net profit of €3.406 billion in 2019.

Iberdrola is leading the energy transition towards a sustainable model through its investments in renewable energies, smart networks, large-scale energy storage and digital transformation to offer its clients cutting-edge products and services. With its commitment to clean energy, it is one of the companies with the lowest emissions and sets an international example with its contribution to climate action and sustainability.

It is a leader in green finance, being the first Spanish company to close a green bond issue and having carried out eight senior public issues with this format to date. It has also completed green private placements and other subsidiaries in its group – such as AVANGRID and Neoenergia – have made further green bond issues. In line with this strategy, in late 2016 Iberdrola became the world’s first energy company to take out a green loan.

How To Make Sure Your HR Team Is Ready

GLD Fresh High as Powell Says FOMC Has ‘No Limit’

2 ETFs For Investing In Robinhood’s Most Popular Stocks