Home Eurozone “The COVID-19 crisis has brought into sharp relief inequalities between women and... 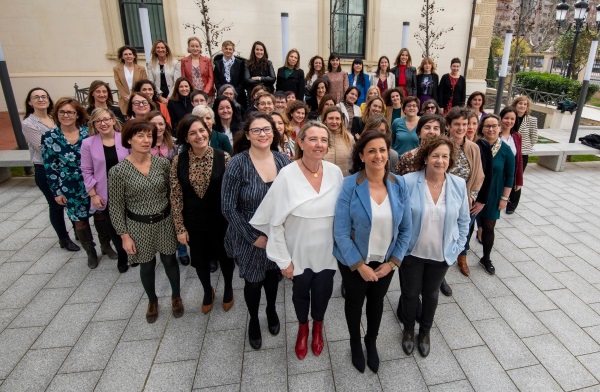 In this
interview, Concha Andreu Rodríguez (ES/PES), President of the Regional
Government of La Rioja, talks about the EU’s Gender Equality Strategy and the
impact of the COVID-19 pandemic on women. Ms Andreu is the rapporteur for the
opinion adopted this week by the Commission for Social Policy, Education,
Employment, Research and Culture (SEDEC) of the European Committee of the
Regions (CoR). It is scheduled to be adopted in the plenary session in October.

You are the rapporteur for the CoR opinion on the EU’s Gender Equality Strategy. What do you think of the Commission’s proposals and what are the main recommendations in your opinion?

The communication A Union of Equality: Gender Equality Strategy 2020-2025 is a very valuable tool for making tangible progress on gender equality in the European Union.

The publication of the European Commission’s communication coincided with the 25th anniversary of the adoption of the Beijing Declaration and Platform for Action, which was the first universal action plan for advancing equality between women and men. Despite the amount of time that has gone by, it remains valid today because there is still a lot to be done in the field of gender equality. The European Commission’s communication will also help us achieve the Sustainable Development Goals, where gender equality is a key component for inclusive and sustainable development.

However, the strategy’s governance can still be improved. There is a glaring omission as regards us, the local and regional authorities. Given the key role we play in managing policies that directly affect the public, we need to be involved in this respect. This is why we are calling on the European Commission to consider us as strategic partners in the design, implementation and monitoring of the strategy.

How would you describe the impact of the COVID-19 pandemic on women?

After spending the last few months in the front line in the fight against COVID-19 in my region – one of the first to be affected and among the hardest hit by the pandemic in Spain – I can say that there have been many different facets to the crisis. It has not just been a health and economic crisis: we have also had to deal with social problems stemming from inequality.

Rather than giving rise to more inequality, COVID-19 has brought into sharper relief inequalities that already exist, particularly gender inequality. In all the points of the opinion we have included references to COVID-19, covering issues such as gender-based violence, which has intensified under the lockdowns; the difficulties experienced by many women across the EU in combining working from home with care responsibilities; the fact that women have been in the front line during the pandemic (healthcare and childcare workers, carers for older people, domestic and retail workers, etc.); the increased powerlessness of women in developing countries, and so on.

As the strategy was drawn up and published before the COVID-19 public health crisis broke out, with the benefit of hindsight we can now say that it is incomplete. An assessment should be made as to how the crisis has only served to highlight even further the existing inequalities between women and men. The lesson we should learn here is that we need to provide resilience tools with regard to gender in case of future crises.

You are the first female president of the La Rioja region. How does the regional government promote gender equality?

We have set up the first body on equality in the regional government: the Directorate-General for Equality, tasked with coordinating equality measures via the Interdepartmental Equality Committee, which includes representatives of all the departments promoting action in favour of equality in the various sectors. This enables us to address specific inequalities in fields such as rural areas, employment and work-life balance, and culture.

As well as integrating the gender approach into the administration’s day-to-day work, which is essential, we are pushing for regulatory development to make this gender mainstreaming structure a permanent fixture in the administration and to promote equality among the other social partners. Furthermore, we believe that raising awareness of and providing information on equality issues is vital for promoting regional equality. The aspect of legal sanctions is an important and necessary one, but I think that the real transformation will be that of society taking on board the ideals and principles of equality and diversity.

To meet these objectives, we are working on the gender equality act and taking part in initiatives that support this principle, such as “¿Dónde están ellas?” (Where are the women?), implemented by the European Parliament Liaison Office in Spain, which draws up an annual report analysing how many women take part in public events where there is more than one speaker, with the aim of improving the figures year on year. More than 150 institutions, media outlets, companies, entities and so on have already signed up to this initiative.

What can the European Committee of the Regions and other EU institutions do at EU level?

The discussion has now started on the strategy that the Council and the European Parliament should adopt. The European Committee of the Regions is contributing to the process with its opinion on the EU’s Gender Equality Strategy, but beyond the strategy adoption process, in which we are involved, as local and regional authorities we are calling for our role to be recognised as key partners in implementing the strategy.

As we are responsible for managing public policies, we take the gender dimension into consideration in developing all these policies. In the opinion, we make a series of requests to the EU institutions. We are asking to be involved in a structured way in the EU network on the prevention of gender-based violence and in implementing the awareness-raising and communication campaign that will be launched at EU level, something that is vital for combating gender stereotypes. We are also calling for appropriate funding for gender policies by making use of the programmes provided for in the Multiannual Financial Framework.

The Committee has a very low percentage of women among its members, which to some extent reflects the low proportion of female representatives at local and regional level. Although this is changing, there are still very few women with political responsibilities across Europe. The European Committee of the Regions should adopt a gender parity strategy, as some of its political parties have already done, thereby giving a clear signal that things need to change.

We also provide an ideal showcase, where Europe’s local and regional authorities can present and exchange their best practices on gender issues. We must continue to encourage this to be a place to discuss and share experiences so that all the regions and members of the public can give each other feedback and learn about measures that they can introduce in their own areas.

Competition: The European Commission launches a process to address the issue of collective bargaining...

EIB provides €300 million to Autonomous Province of Trento for sustainable projects and post-COVID-19...