Home Investments Oil Traders, Not OPEC, Will Decide If Worst Is Over For The...

Saudi Energy Minister Abdulaziz bin Salman likes to throw a little humor and taunting into serious talk when he feels he has to give an important message on .

“Make my day,” he told oil bears in September using the renowned Clint Eastwood line that warned of the doom that befell the bad guys who tried to take on Hollywood’s most-feared cop.

On Monday though, he tried to sound more factual than fun when he declared “the worst part is over” on his outlook for oil demand.

But a casual glance across the oil consumption map and the map for coronavirus hotspots suggests that a new worse period for oil demand is just beginning.

A month after its peak summer driving season, the United States is still reporting , which, in theory, is great for oil bulls. But look beyond the headlines and into the weekly spreadsheet provided by the Energy Information Administration and one will see the cogent picture of demand driven by U.S. crude exports into one main growing area: China. 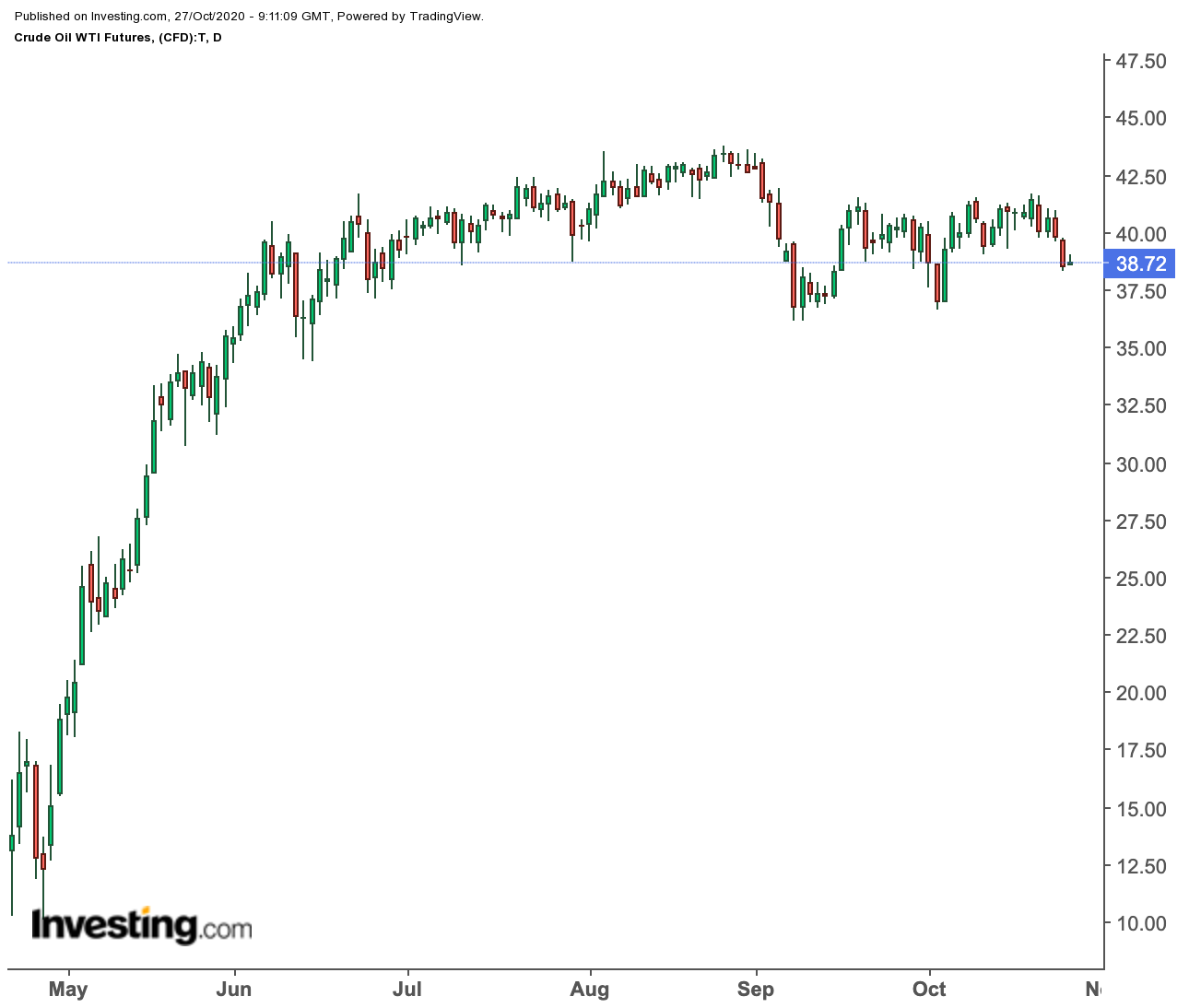 The United States is now China’s fourth largest crude supplier. The Chinese market itself has become the single biggest for American oil. U.S. exporters ship out about 3 million barrels of crude on the average a week and China gets almost a half of that at times.

Latest EIA from September reveals that in May, some 1.3 million barrels of U.S. crude landed in China. But despite its importance, China isn’t the only market for U.S. oil. Exports to Canada, another key market for U.S. crude, fell 19% in the first half of this year compared with the same period of 2019. Exports to South Korea slumped by 27%.

And while crude sales are very important to any oil producer, the other key components of the global oil market—diesel and jet fuel which dominate consumption in the trucking/transportation and aviation sectors, respectively—have been tanking.

John Kilduff, founding partner at New York energy hedge fund Again Capital, told Investing.com that while gasoline stockpiles have fallen in five of the seven weeks since the start of September, actual demand for the motor-fuel was below seasonal norm:

“We had a bright spot a couple of weeks ago when we actually had a near-normal demand week, when uptake of gasoline hit a hair above nine million barrels. Since then, it’s done nothing but come down. You look at the COVID-19 map and you’ll see a correlation between the hotspots there and the red in gasoline prices.”

It was a similar depressing picture with jet fuel, with hopes raised when U.S. airlines were logging about a million passengers a week before coronavirus caseloads began exploding again in the United States, Britain, France, Spain and Italy.

“With jet fuel demand already cratering, any hint of a more widespread lockdown in Europe will really do oil in.”

After an unprecedented drop in air travel due to the coronavirus, passenger airlines are being forced to make long-term, make-or-break decisions at a time of great uncertainty and minimal cash flow. Demand for jet fuel is considerably smaller than gasoline or diesel consumption. Still, it represents a sizable chunk of the oil market and one that was growing quickly before the pandemic.

Doug King, chief executive of U.K.-based hedge fund RCMA Capital, told the Journal that the market for jet fuel was ‘pretty sick and will probably stay sick”, while the market for crude had “a massive, long, drawn-out demand problem” that will keep prices on “the same old road to perdition over the next few months.”

OPEC Cannot Roll Back Cuts Yet

Such a dire outlook means that the OPEC+ alliance of world oil producers will not get to roll back their output cuts anytime soon. Led by the Saudi minister Abdulaziz, the 13-member Organization of the Petroleum Exporting Countries, and its 10 allies steered by Russia, have kept crude prices above or near $40 per barrel since May with production cuts.

But with trading under $39 on Tuesday, the group is hesitant to add more supply to the market despite the urgent need for individual producing countries to pump and sell more in order to fund economies battered by the pandemic.

OPEC’s secretary general Mohammad Barkindo admitted on Monday that any oil market recovery may take longer than hoped due to the latest rise of COVID-19 infections.

But even if the majority in OPEC agree to bite the bullet and not produce more, one member cannot be restrained—. Just liberated from a civil war that prevented it from exporting a single barrel since January, the north African state has turned its spigots on full over the past few weeks. Libyan output now stands at 525,000 barrels daily and could reach 1 million bpd by early next year.

Iran Might Be A Bigger Headache For OPEC Eventually

A bigger threat than Libya—one that will only be known after next week’s U.S. presidential election—is Iran.

While President Donald Trump has virtually crippled Iranian crude exports with anti-nuclear sanctions over the past two years, his challenger in the Nov. 3 election, Joe Biden, could free much of that if he wins the White House and reactivates the Obama-era nuclear deal with Tehran that Trump had canceled.

Iran is an OPEC member. But the future of its exports is something no one in the group wishes to publicly discuss at this point, given the premature situation over the U.S. election.

Russian President Vladimir Putin, speaking a week ago, did not rule out cooperating with Saudi Arabia to extend current OPEC+ output cuts of around 7.7 million bpd.

Back in March, the two oil giants became bitter rivals briefly, after Putin refused to support Riyadh on output curbs at the height of the COVID-19 outbreak. The resultant all-out production war between the two drove the U.S. crude market into a historic negative $40 per barrel by end-April before talks brokered by President Trump brought OPEC+ back into a deal.

It is a reflection of how far the alliance has come since then that prompted minister Abdulaziz to guess on Monday that “the worst part is over” for oil, adding that OPEC will remain “vigilant” as a group.

But with the wildfire-like coronavirus spread and the Iranian wild card beckoning, a new worse era may just be starting for OPEC and oil prices.

Chart Of The Day: NASDAQ Bulls Still In Control, At Least For The Short-Term

How A Top Professional Speaker Pivoted Into A High-Revenue Virtual Career He Runs From...

Europe's moment: Repair and prepare for the next generation